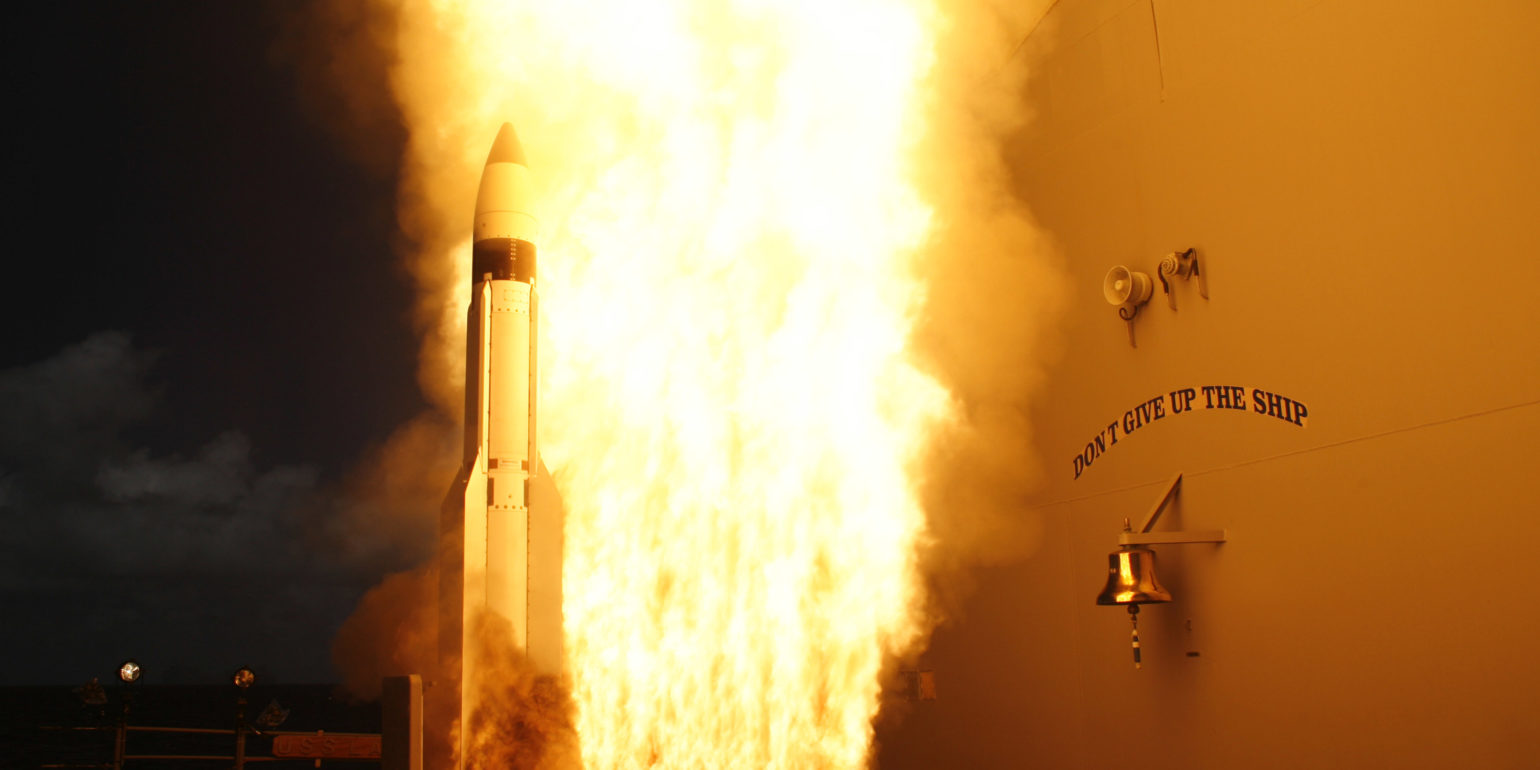 The Standard Missile-3 (SM-3) is a derivative of the RIM-156 Standard SM-2 Block IV missile, and is the interceptor component of the U.S. Navy theater ballistic missile defense system, called NTW-TBMD (Navy Theater Wide – Theater Ballistic Missile Defense). It is an upper-tier (exo-atmospheric) ballistic missile defense weapon designed to intercept short- to intermediate-range ballistic missiles in the midcourse and terminal phases of flight. The SM-3 was originally planned to complement the lower-tier SM-2 Block IVA until the latter was canceled in December 2001. However, modern Aegis software has allowed the SM-3 to work in cooperation with lower-tier SM-2 and SM-6 air defense missiles.

The LEAP uses a Forward Looking Infrared (FLIR) sensor to locate its target, and was tested in 4-flight series called Terrier/LEAP from 1992 to 1995. These tests used modified Terrier and Standard Missile-2 missiles. Two intercepts were attempted during these tests, but the LEAP failed to hit the target in both cases. The first flight-test of an RIM-161A SM-3 missile occurred in September 1999, and the third test (in January 2001) demonstrated successful missile flight and control up to fourth stage (i.e. kinetic warhead) separation. In January 2002, the first all-up test of an SM-3 succeeded in intercepting an Aries ballistic target missile. For up-to-date information on testing, see the “U.S. Missile Defense Intercept Test Record” section of our web site. SM-3 has successfully achieved 28 out of 36 intercepts during tests including the satellite shoot down in February 2008. 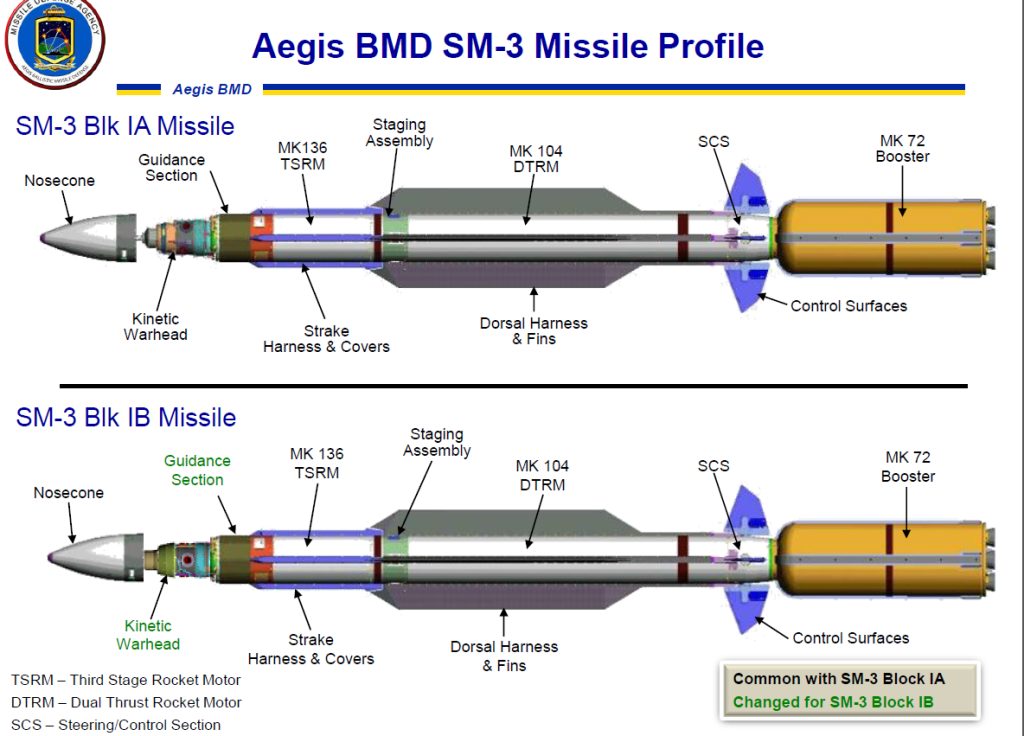 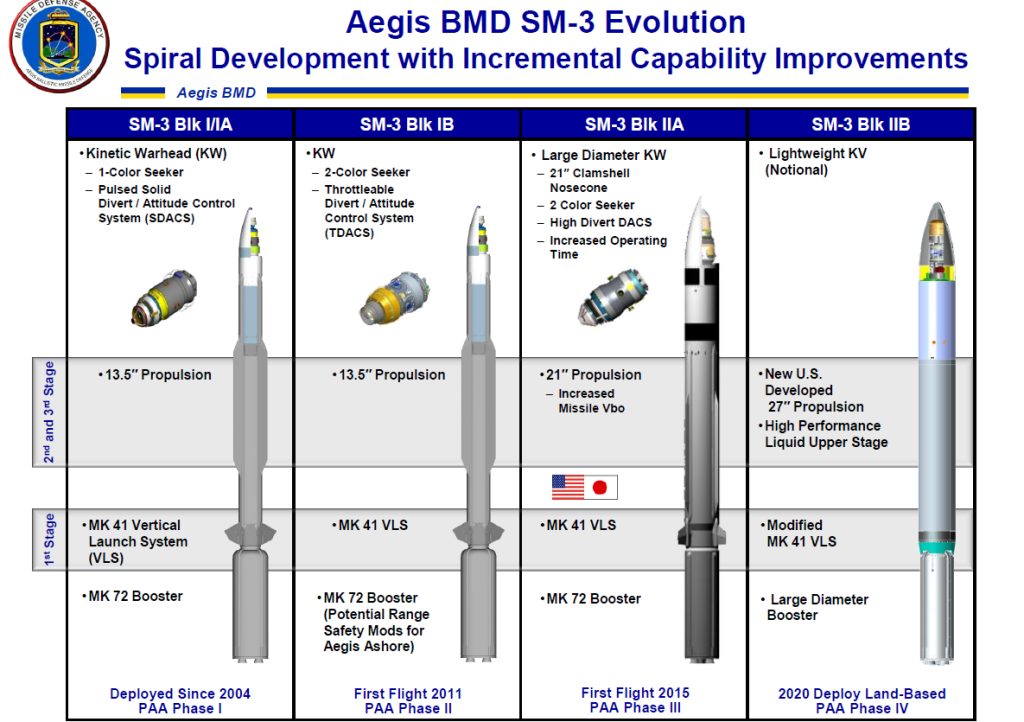 In 2015, Phase II called for 100 SM-3 Block IB interceptors to be deployed in Europe alongside the new Aegis Ashore site in Romania. The new land-based version—Aegis Ashore—is configured as Aegis BMD 5.0 with SM-3 IB interceptors. Aegis BMD 5.0 does not add new functionality, but is designed to integrate Aegis BMD 4.0.1 with the Navy’s open architecture system, enabling any Aegis ship to perform the BMD mission.

The Department of Defense shifted in strategy for the defense of Europe from one that relied on Ground-Based Midcourse Defense interceptors in Poland, to implementing the new European Phased Adaptive Approach (EPAA) in which Aegis BMD became the centerpiece. The currently deployed systems for Phase I and II of the EPAA are Aegis BMD 3.6.1, 4.0.1, and 5.0 with SM-3 Block IA and IB interceptors. Phase III of the EPAA calls for the development, testing, and deployment of new SM-3 Block IIA interceptors and Aegis BMD 5.1 systems to Europe by 2018.