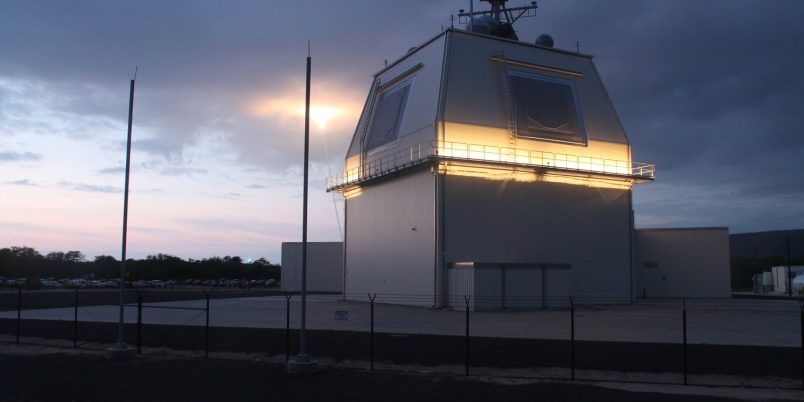 Aegis Ashore was first announced in 2009 as part of the European Phased Adaptive Approach (EPAA) and is the land-based variant of the sea-based Aegis Ballistic Missile Defense (BMD) system. Aegis Ashore shares components of the ship-based version including the Aegis AN/SPY-1 radar, Command, Control, and Communication systems, Computers and Intelligence (C4I) systems, MK-41 Vertical Launch Systems, computer processors, display systems, power supplies, and Raytheon SM-3 interceptor missile variants. The system is designed to identify, track, and intercept short-, medium-, and intermediate-range ballistic missiles during their midcourse phase of flight. To keep pace with the evolving ballistic missile threat, Aegis Ashore facilities are also removable, allowing for mobility, adaptability, and worldwide deployment.[i]Currently, Aegis Ashore is operationally deployed in Romania, with a test facility in Kauai, Hawaii. As mandated by the EPAA, another site in Redzikowo, Poland, is under development and was scheduled to be operational by 2018.[ii]Gen. Samuel Greaves, head of the MDA stated in an early 2018 congressional testimony that a number of construction issues at the site has delayed the initial operational capability until 2020.[iii]Future capabilities of Aegis Ashore will include engagement of longer-range missiles, enhanced terminal capability against short- and medium-range ballistic missiles, early intercept, and engage-on-remote features.[iv]

The baseline Aegis Ashore Sites for the EPAA were specifically structured to literally take the Aegis Baseline 9 Weapon System as designed for shipboard installation and adapted for a relocatable building structure.  The System installed in Romania included BMD 5.0 functionality to include the AN/SPY1D(v) radar, SM3BLKIB exo-atmospheric interceptor and full communications and command and control functions ballistic missile defense.  The air defense portion of the AWS has not activated due to international diplomatic concerns.  The Poland Aegis Ashore site will incorporate BMD 5.1 to enable the use of the greatly improved SM3BLKIIA exo-atomospheric interceptor to enhance the defensive reach for the European continent.  These systems are interoperable with the NATO Ballistic Missile Defense Operational Capability (BMDOC) Command and control via the US C2BMC European network.

The follow Aegis Ashore Systems being developed for Japan and future installations will be upgraded with solid state AN/SPY 7 radars and continued upgrades of Aegis Baseline 9/10.https://www.intelligent-aerospace.com/military/article/14072508/radar-anspy7v1-lockheed-martin-japan

Europe The EPAA was designed to be a cost-effective method for the creation of a layered missile defense network in Europe that would protect U.S. partners, allies, and assets in the region from the growing Iranian ballistic missile threat.[v]Although the U.S. has repeatedly insisted that the deployment of Aegis BMD systems in Europe are designed to counter short- to intermediate-range ballistic missile threats from the Middle East, Russia has objected to the layered missile defense network, saying that it undermines the credibility of its strategic deterrence.[vi]Aegis systems in Europe are designed and positioned to defend against ballistic missiles coming from the Middle East and lack the technological capability to counter intercontinental-range threats coming out of Russia. While the missile defense network called for by the EPAA would be technically unable to negate or undermine Russia’s strategic nuclear arsenal, Moscow remains concerned that the missile defense system in Europe will continue to expand and impede its ability to deter what it sees as unwarranted NATO expansion. As a result, the U.S. has implemented diplomatic initiatives to educate the Russians on the EPAA and establish cooperation for European missile defense.