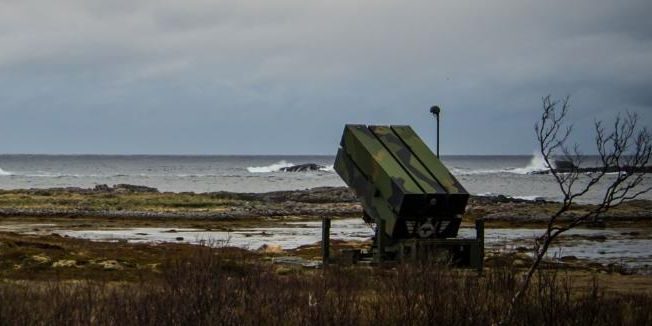 Jointly designed by Raytheon and Kongsberg, NASAMS reached operational capability in 1994 and was first deployed by the Royal Norwegian Air Force. The system can engage 72 targets simultaneously in active and passive modes and, using active seeker missiles, can intercept targets beyond visual range. The NASAMS is armed with three launchers, each carrying up to six missiles. The primary weapon used by the system is the AIM-120 AMRAAM, however, the system can also employ AIM-9X Sidewinder, ESSM, and indigenous missiles.[ii]

An upgraded version of the system called NASAMS II has been in service since 2007 and is equipped with new radar and 12 missile launchers for quicker identification and target destruction. In June 2015, Raytheon and Kongsberg entered into a 10-year agreement to expand their partnership on NASAMS until 2025.[ii]

The NASAMS can use multiple warning and tracking radars shared across integrated link 16 networks with a variety of air defense interceptors. The original NASAMS uses AIM-120 AMRAAM, a longer-range interceptor, and the NASAMS-3 integrates the AIM-9X, a shorter-range interceptor. The AIM-9X developed and deployed by the USAF is capable of all of its fighter jets for the critical capability of offensive and defensive air-to-air in shooting down enemy cruise missiles and aircraft. It is a short-range, multi-purpose, infrared tracking missile that harnesses the unique capability to be transferred directly from the wing of an aircraft into the NASAMS multi-missile land-based launcher. The AIM-9X is an all-services (the U.S. Army, Navy, and Air Force) effector featuring the most advanced IR seeker in use today, providing an effective solution to track and intercept hard-to-detect, fast-moving cruise missiles. The AIM-120 possesses the dual-use feature requiring no modification on the missile from aircraft to land battery. The F-15 EX actively utilizes these AMRAAMs for the defense of the United States and allied airspace.

The United States has been using NASAMS to defend the NCR since 2005, following the Spanish Army’s acquisition of four units in 2003. Since 2006, Norway, Finland, and the Netherlands have ordered the upgraded NASAMS II air defense system. Lithuania, Oman, and Indonesia have also deployed NASAMS. Since 2017, Australia, Qatar, and Hungary have begun the procurement process to obtain NASAMS units.

In August 2022, the U.S. pledged to send six additional NASAMS units to Ukraine to further aid in the protection of the Capital, Kiev, and the defense of Ukrainian critical assets and populations. The first two of the eight NASAMS units will be delivered to Ukraine in November 2022. Ukrainian military personnel will be undergoing training to operate the systems prior to their arrival.