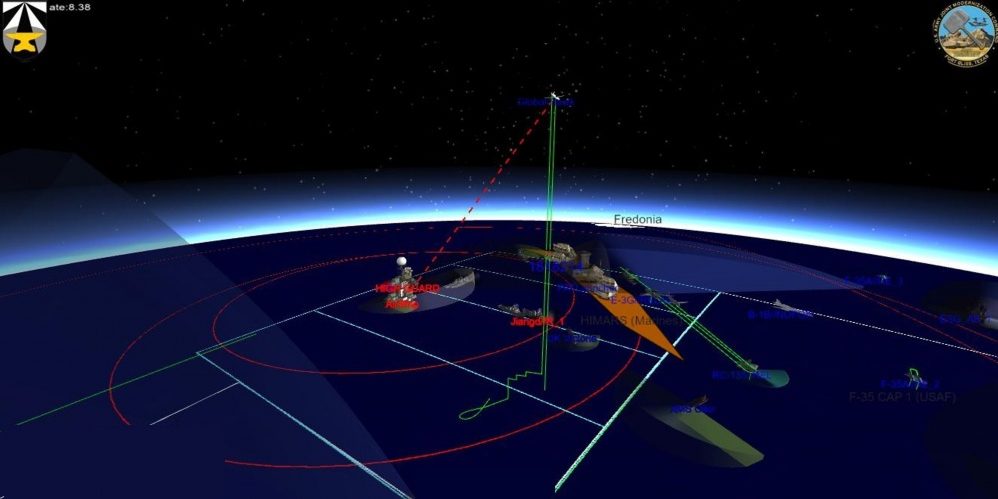 The Joint All-Domain Command & Control (JADC2) is the initiative to replace the current domain and control systems with one that connects the existing sensors and shooters and distribute the available data to all domains (sea, air, land, cyber, and space) and forces that are part of the U.S. military. The goal is to move to a system that connects every sensor and shooter, providing the necessary data to respond to threats in an optimal way. It is a joint effort that seeks to bring in input from every service branch and operates in a bottom-up fashion by allowing for the transfer of data from one domain to another (this is what is meant by every sensor, every shooter.) For example, an Army command and control (C2) node could provide data on a target to different aircraft or vessels that are better positioned to carry out an intercept or strike. By using data from the Aegis and F-35s, through a prototype called TITAN which stands for Tactical Intelligence Targeting Access Node, the Army plans on piloting a new tactical space technology that will improve mission commands on a multi-domain battlefield. It would leverage space and high altitude, aerial, and terrestrial layer sensors to provide valuable data to fires networks.[i]

Having a competent technology capable of incorporating all the data and dispersing them on time is necessary to ensure parity with our near-peer adversaries, most notably Russia and China, as well as rogue states such as North Korea and Iran. JADC2 will provide a more resilient and exponentially faster dynamic to responding to incoming threats and countering enemies. [ii]

“Situational awareness is most powerful when it enables effective and timely decision-making at the right level whether tactical, operational or strategic. Making such a decision at the needed operation tempo presents both a human as well as a technical challenge. We must continue to develop and empower Airmen at all levels with the skills for joint planning, battle management, and better understanding of how to optimize joint capabilities across multiple domains. We need both leaders and tools that can visualize multiple battlespaces and execute rapid decision-making in an outright fight or in competition short of armed conflict” – General David Goldfein, Air Force Chief of Staff [iii]

The Defense Department is working to create a system that best connects and manages joint force operations during conflict. The premise of JADC2 is to move from the current highly centralized concept to a more distributed one that connects every sensor to every shooter and blends artificial intelligence with human judgment to accelerate decision making. The Air Force offered its Advanced Battle Management System (ABMS) as the architect to represent the foundation of the JADC2.

For JADC2 to work, “any sensor should be able to link to any shooter and any command and control node…” for example, “an army command-and-control node with timely data on a target should be able to task fighter aircraft or maritime vessels to attack, if those are best situated to do so.” [iv] This bottom-up approach better suits the goal of having a more distributed decision authority, facilitating multiple and faster decision-making processes. The downside is this would lead to an inefficient effort to achieve desired strategic effects due to a lack of insight of the top priorities. Therefore, a combination of bottom-up and top-down approaches would make for the best JADC2 system.[v]

The ideal scenario sees the data flow across all five domains of warfare which are sea, air, land, cyber, and space, with the challenge to create a structure that allows the linkage of interoperable sensors and shooters around the world. Air Force Chief of Staff, Gen. David Goldfein said that the Air Force wants to be the one to lead the project, requesting $302 million to acquire the necessary platforms and systems. The dream of connecting all branches, however, is quite distant from coming to fruition. For now, estimates project that a total of over $1 billion will be used through fiscal year (FY) 2024 for the program.[vi] 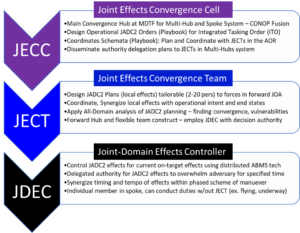 General Mike Holmes, U.S. Air Force commander, Air Combat Command (ACC) has said, “We know that multidomain operations and Joint multidomain command and control is a Joint problem and it requires Joint solutions that are much bigger than the Air Force and for us in the Air Force, with the Joint all-domain command and control (JADC2) approach, that is in our Shadow Operations Center”[viii]

Using a DevOps strategy with new capability demonstrations every four months and building a technical architecture from the bottom-up, the Air Force is hoping to implement a “if you build it, they will come” philosophy that will entice other military services to accept ABMS as the starting point for the JADC2. The problem is that each service has unique specifications and requirements that a single branch cannot provide with full accuracy, making a full bottom-up approach difficult to work. However, despite the difficulties to connect different combatant commands from all over the world, JADC2 will have the capacity to connect all-domain operations, integrating space and cyberspace with operations in the air, land, and sea domains, where geographic commanders traditionally have authority.

A JADC2 experiment was conducted at the end of February 2020 in Nevada and 11 other geographically separated nodes. The primary focus was on innovation to establish a functional baseline for experimentation that could bridge existing technologies, enable machine-to-machine information flow, and support a joint coalition. Named “Experiment 2,” it achieved its main objective to “connect, share, and display” although there is a long way to go to attain the desired levels, including making developments in the area of cybersecurity and policy as well as the ability to connect the different technologies of the coalition partners.[ix]

The Army has also taken important steps to contribute valuable insights to the JADC2 initiative. As the ultimate goal is to connect and coordinate operations across the five official domains, it is likely that each service will have idiosyncratic ways to model the system, which is why it is important that cooperation remains a top priority. The Army decided to go ahead with the so-called Project Convergence which will try to form a “sensor-to-shooter” network that shares data between its long-range precision fires, the Army network, and the air and missile defense assets. As Col. John Rafferty has said, “We have to make sure that what we technically demonstrate later this year fits into a larger JADC2 architecture […] I view this as kind of the ground portion of JADC2. How do we meet JADC2 in the middle? We’re going to start from the ground up, they’re going from space down.”[x]

In a roundtable event with the Missile Defense Advocacy Alliance that took place on Wednesday, May 13, 2020, Brig. Gen. David Kumashiro said that “Each of the services have made significant investments trying to get at this JADC2 problem set. With that being said, each of the services have different platforms and different tactical edge devices that they need to ensure can link to the larger collective, which is, again, this Joint environment, JADC2, ABMS… The department of the Air Force can ill afford to fund all of those efforts across the Joint Force. That’s why, again, in terms of wanting to give reassurance to folks that it’s not, I know it sometimes may come across as a little bit of a hostile takeover, but I think as General Fantini had mentioned, it’s really about connecting with those systems and making sure that the data flows down to the tactical edge using those Army systems, those Army investments, the Navy investments, the Marine Corps investments, etc.”[xi]

At the same event, Stan Stafira, Chief Architect at MDA, talking about JADC2, said that “we need that in this architecture as well. We need to leverage that Joint All-Domain Command and Control to be able to do this to what we need to do in the future. Incorporating cyber defenses, making sure our defenses are layered, making sure that we have the ability to transition capability between different regimes so that we have a more robust defense as we look into the future as well as optimizing our resources.”[xii]

More recently, it was announced that the Air Force had attained a new milestone when it awarded up to $950 million to strengthen developments of its ABMS system for future joint operations. While there has been much debate regarding whether the Air Force could have its ABMS used as a backbone for the greater JADC2, it is nonetheless important to view these news in a positive way, as this massive boost in investment might prove essential in discovering critical ways in which the connection between the two could emerge.[xiii]

While JADC2 will eventually be implemented, there are current questions that must be answered before proceeding. Most importantly, it is still debatable whether the project should go on in a bottom-up or a top-down way. If the latter, or a hybrid, position is adopted, there will be a specific service branch that will need to step up and create a link between combatant commands. One branch that has asserted itself as a main candidate is the Air Force, whose ABMS infrastructure could provide a template for the JADC2, but it is still early to tell whether or not this will be possible.

There are many other obstacles that must be considered before going further with the concept.

Here is a video of Brig. Gen. Dave Kumashiro discussing the concept of joint force integration within the JADC2 framework:

For an in-depth discussion on the future of command and control, check out the roundtable event organized by MDAA here.