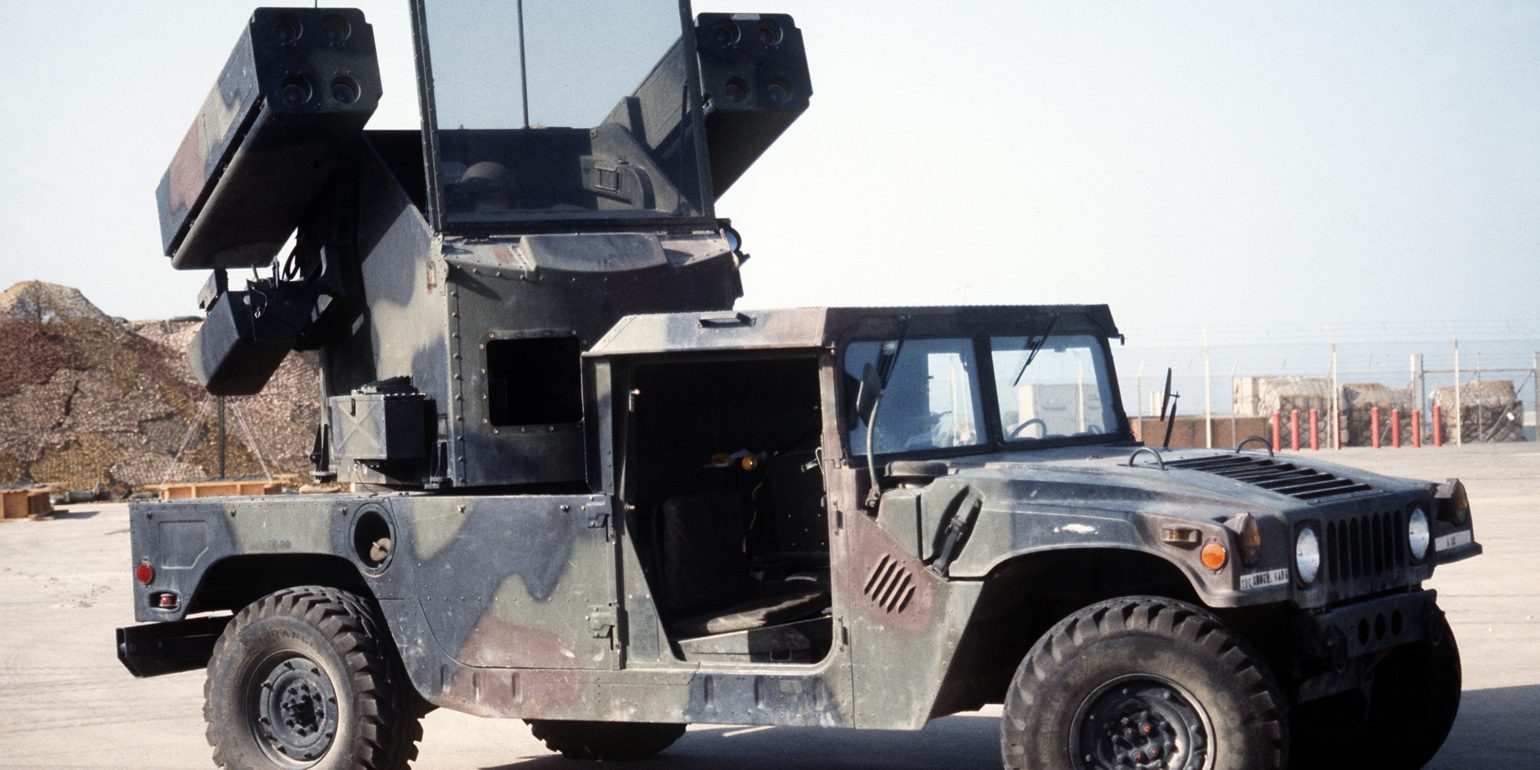 The Avenger features a 360-degree rotating turret with two missile pods—which hold up to four Stinger missiles each (eight total)—mounted on a heavy HMMWV chassis. The turret drive is gyro-stabilized, allowing the missile pod to maintain aiming direction regardless of vehicle motion.

Avenger is manned by a gunner, who operates inside of the firing station in-between the two missile pods. The gunner uses a glass optical sight that displays missile seeker activate, uncage, and fire permit indications. Targets are acquired by using the optical sight or the Raytheon AN/VLR-1 Avenger FLIR (forward-looking infrared), which is a laser range finder and a video auto tracker.[ii] FLIR sensors provide Avenger with a target acquisition capability in obscured battlefields, at night, and in adverse weather.  Due to the Avenger’s low survivability against enemy direct fire, crews can operate the weapons system from a remote control unit up to 50 meters away from the firing line.[iii]

A majority of Avenger systems are in the Army National Guard, with only three Active Army battalions equipped with Avenger systems. The Marine Corps used to operate the Avenger until retiring it during the War on Terror. In 1991, the Avenger was deployed to support NATO troops during Operation Desert Storm. The short-range air defense system has also been fielded in Bosnia and South Korea. In 2003, the Avenger was deployed during Operation Iraqi Freedom and was used as an air defense and ground security system. Since it was first delivered in 1988, the Avenger has undergone numerous upgrades to maintain its interoperability and effectiveness on the battlefield.[iv]

The Avenger system is also an integral part of the National Capital Region Integrated Air Defense System (NCR-IADS) Mission. Avenger equipped Army National Guard units rotate to the NCR to participate in the mission. The Avenger is used for day and night protection using its Forward Looking Infrared (FLIR) and Laser Ranger Finder to target and destroy manned and unmanned ISR aerial systems. Avenger plays a part in preventing any kind of decapitation of the U.S. Government.

The Avenger’s primary role—medium and short-range air defense (MSHORAD)—fell by the wayside during the late 2000s because the United States prioritized other weapon systems in Afghanistan and Iraq.

In 2004, the U.S. Army had 26 battalions with Avenger Short-Range Air Defense (SHORAD) capabilities, but prioritization of other weapon systems during operations in Afghanistan and Iraq caused that number to drop to nine by early 2017, of which two were within the active force and seven were in the Army National Guard. Of the over 1,100 Avengers built, only about 400 remained in service by 2016.[v] In response to renewed Russian aggression, the Army plans to deploy the Avenger system to Europe to fill the critical SHORAD gap in 2018.[vi] The Army has initiated plans to resurrect retired Avengers systems that currently reside at the Letterkenny Army Depot and deploy the Avengers to Europe. So far 72 Avenger systems have been refurbished and moved to Europe to outfit the recently stood up 5th Battalion, 4th Air Defense Artillery Regiment (5-4th ADAR) in Germany. The Army plans to stand-up nine more SHORAD battalions equipped with Avengers, with the next four stood up by 2024. Eventually these battalions will upgrade to the IM-SHORAD Stryker platform equipped with two Longbow Hellfire missiles, four Stinger missiles, a 30mm chain gun, and a 7.62mm machine gun.[vii]  An initial fire unit with 12 systems is projected for fielding in FY21.

The Army desperately needs mobile short-range air defense in its formations as it prepares for near-peer competition. The battlefield of now, and the future, is one in which American air supremacy is not guaranteed; in hybrid environments insurgents and paramilitaries have made use of small drones to provide threats from above. In Warfighter Exercise 19-04 in Europe, the command staff for 1st Infantry division and III Corps learned that without an integrated, layered air defense plan for all systems, forces will fall prey to enemy attack aviation fairly quickly.[viii] Moreover, it is difficult to get the air defense umbrella quickly up again with new replacement systems from the rear. The Army must be able to defend itself and partners from these threats.

According to the Army Space and Missile Defense Command’s “Army Air and Missile Defense 2028” document, the most critical near and mid-term capacity gaps are maneuver force protection and countering air threats.[ix] Maneuver force protection is being addressed by the growth of M-SHORAD battalions. In accordance with the CSA’s directive, four battalions (144 systems) will be fielded by FY23 with a desired end state of one battalion per division in the active and reserve components. The initial battalions will respond to the urgent needs of U.S. European Command. M-SHORAD units will provide capability against Unmanned Aerial Systems (UASs) and fixed-wing/rotary-wing (FW/RW) aircraft threats to maneuver forces. The second capacity and capability gap is countering cruise missiles, FW/RW aircraft, rockets, artillery, mortars (RAM), and UAS threats to fixed and semi-fixed assets. The Army is addressing this gap with the Indirect Fire Protection Capability (IFPC). M-SHORAD/IFPC are designed to work as a pair in the maneuver area in composite, tailored formations.

These needs explain why retired Avengers systems in storage have been rehabilitated and sent to new active duty units to provide air defense to the maneuver force.  These avengers are a stop-gap however as they are extremely vulnerable to enemy direct fire weaponry since they have no armor.  Even in the Gulf War, Avengers were put in semi-permanent prepared positions behind earthen bunkers to protect them from crude Iraqi tanks.  As Avengers roll out, new IM-SHORAD Stryker-based platforms will fill in behind them to fix the issue of survivability.  The advantage of having these Avenger battalions set up now is that the IM-SHORAD systems can fall into formations waiting to receive them.

February 11, 2019: The first 36 of 72 refurbished Avengers arrive to the 5-4th ADAR.  This ends the rotational deployment of National Guard Avenger systems to Germany.[x]

March 27, 2018: The 678th Air Defense Artillery Brigade is deployed to Germany. Equipped with Avenger systems, the 678th is the first American Air Defense Brigade deployed in Europe since the end of the Cold War.[xi]

March 2018: The U.S. announced it will refurbish and deploy a total of 72 Avenger systems that had been retired in the Letterkenny Army Depot boneyard to Europe.

April 2017: An Avenger fired Stingers at two UAVs in a test on Eglin Air Force Base, marking the missile’s first interception of a UAV target.

January 2017: During the protest of the Dakota Access Pipeline near Standing Rock, the North Dakota National Guard deployed an Avenger as an observation platform. It was removed a month later to deescalate tensions.

December 2008: The Laser Avenger acquired and tracked three small UAV targets and shot down one of the three.

June 2006: Boeing was awarded a Foreign Military Sales contract for an additional 25 Avenger units for Egypt.

April 2005: Eight Avenger vehicles in service in Iraq were modified for the ground security role. The right missile pod was removed and the M3P gun moved to the missile pod’s position, enabling 360-degree firing.

March/April 2003: A number of Avenger systems were deployed during Operation Iraqi Freedom to provide air and ground security.

Early 1999: The Army exercised a $14.6 million option on future production of an upgrade kit for Avenger air defense units.

1991: The Avenger was deployed to support NATO troops during Operation Desert Storm.

April 1990: The Defense Acquisition Board approved the Avenger system for full-scale production.

1988: Boeing delivered the first production unit to the US army.

August 1987: The Avenger Project Office contracted with the Defense Systems Division of Boeing Company to build and deliver the Avenger system.