We Have to Stop What’s Coming

Earlier this week, the Defense Intelligence Ballistic Missile Analysis Committee released a Report titled “Ballistic and Cruise Missile Threat,” which states the increasing proliferation of missile technology around the world, as well as the growing ballistic missile threat to the United States and the world. The continued and increased proliferation of advanced ballistic missile technology such as advanced guidance systems, warhead decoys and countermeasures, maneuverable re-entry vehicles, and MIRVs (multiple independently targetable reentry vehicles) continue to create significant challenges for currently-deployed missile defense capabilities of the United States and its allies. Exponentially adding to this is the proliferation of perpetually-progressing cruise missile technologies, the emerging asymmetric unmanned aircraft system (UAS) such as drones, hypersonic non-ballistic missile technologies and asymmetric threat platforms. In the reality of this clear, present and increasing threat to change the strategic and tactical status of the United States, investment in development and deployment of missile defense technologies will provide the necessary protection to retain U.S. status quo in our ability to project power.

Click here to watch video of the Israeli missile launch and learn more about the Long-Range Artillery Weapon System (LORA).

Unmanned Aircraft Systems (UAS), not mentioned in the Defense Department’s report, are a growing asymmetric threat to the United States. The UAS threat is categorized into five groups. Groups 1-3 are considered to be the greatest threat to military forces across the globe due to their unique range of capabilities as well as their relatively low cost and small size. Groups 1-3 can range from over-the-counter handheld drones to medium sized drones with sensors and the capacity to deliver weaponized payloads. However, the main threat that comes from groups 1-3 is intelligence, surveillance, and reconnaissance (ISR). These smaller systems are suited to conduct tactical and operational level ISR missions, as well as have a 100lbs payload for potential ordinance. The United States does not currently maintain and deploy an adequate force structure of weapon systems capable of defeating group 1-3 drones at a reasonable price. Today, most deployed U.S. forces confronting these small drones are forced to either use assault rifles and small arms, or expensive Patriot missile interceptors to destroy the small drone targets.

Groups 4-5 are less widespread but easier to counter because they tend to operate at speeds and altitudes similar to that of manned aircraft; aircraft which U.S. forces are trained to identify and defeat with currently-deployed air defense systems. These UAS also commonly require runways and are similar in size to manned aircraft, however, they are also capable of carrying much larger payloads and travelling much greater distances than the smaller groups of UAS. 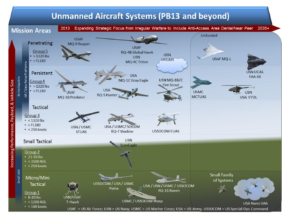 Missile threats from rogue nations such as North Korea and Iran continue to grow and make up the primary missile threats outlined in the report from the Defense Intelligence Ballistic Missile Analysis Committee, however, emerging advanced missile threats from China and Russia are also highlighted. The report underlines the rapid progress of North Korea’s ballistic missile capabilities, discussing missiles such as the KN-08 intercontinental ballistic missile (ICBM) and the KN-14 ICBM, both of which, if tested and operationalized, could be used to threaten or strike the U.S. homeland; possibly with a nuclear payload. Iran’s pursuit of ICBM capability is also mentioned, and the report claims that the country is disguising its ICBM development program as a peaceful space program. Both rogue states are improving the overall ability of their ballistic missile arsenals by developing, testing, and deploying missiles with improved accuracy and defense penetration capabilities.

China, which maintains the most active and diverse missile program in the world, continues to develop and test its offensive missiles by forming specific missile units, upgrading its current missile systems, and developing advanced countermeasures designed to bypass ballistic missile defense systems. These modernization efforts enable China to threaten U.S. forces, allies, and partners in the Asia-Pacific region, and reduce America’s ability to respond to regional crises in the theater. In addition to China’s regional missile capabilities, the report claims that in five years, it is likely that China will possess more than 100 nuclear-capable ICBMs capable of striking the U.S. homeland.

Russia’s missile capabilities also continue to improve, and in September 2014, Moscow surpassed the United States in deployed nuclear warheads with over 1,500 deployed on ICBMs capable of reaching the United States. The U.S. peer adversary continues to spend billions to modernize its ICBM and submarine-launched ballistic missile (SLBM) capabilities, often increasing missile accuracy, survivability, and warhead capacity; all of which create challenges for U.S. missile defense systems.

Land-attack cruise missiles (LACMs) and emerging hypersonic missile technologies are emphasized in the report as emerging missile threats to the United States. LACMs present a major threat for U.S. military operations, as they fly at low altitudes – making them difficult to detect – and can attack a target from multiple directions. Hypersonic glide vehicles– which are launched atop a ballistic missile boosters and glide along the top of the atmosphere to speeds of between 3,800 and 7,500 mph – are being explored by Russia and China, and present significant challenges for contemporary missile defense systems as they fly at ultra-high speeds in unconventional trajectories making them difficult to detect and defeat.

It is critical that the United States invest to stay ahead of these numerous and proliferating missile and aerial threats. Speaking at an event yesterday hosted by the Center for Strategic & International Studies and the Mitchell Institute, Lieutenant General Trey Obering, U.S. Air Force (ret.) and director of the Missile Defense Agency from 2004-2008, stated:

“To be successful in building the required capabilities to meet tomorrow’s needs, MDA’s funding needs to be restored.  A target range today of $10-12B per year would be the right level…which would still only represent < 2% of our annual defense budget. To put this into context, if we took every penny the US has spent on missile defense since the SDIO inception in 1983 it would be ~ $200B. Compare that to the cost of 9/11 which has been put at $3.3T…and that attack did not involve a weapon of mass destruction. So, if we prevent just one attack on a major U.S. city, we will have repaid all of the investment to date for our missile defenses nearly 20 times over.” (Link to Lt. Gen. Obering’s paper)

In leading the United States to technically leap forward by generations ahead of the missile proliferation and the pathway into space, the Missile Defense Agency (MDA) released on June 13th, requirements for a High Altitude Long Endurance (HALE) unmanned aircraft that will be equipped with a high energy laser capability (link).

Directed energy is the future. It starts now!