It’s All About Korea and Japan

The United States Secretary of Defense, James Mattis, is in Asia this week and will be discussing the North Korean crisis in his visits to both Japan and the Republic of Korea (Link). Prime Minster Shinzo Abe of Japan was reelected on Sunday (Link), a strong proponent of missile defense who has recently proposed a $48 billion budget to upgrade missile defense systems, including purchasing U.S. land-based Aegis Ashore interceptors and/or the Terminal High-Altitude Area Defense (THAAD) (Link). The United States THAAD system deployed in Korea was officially declared fully operational this past Sunday (Link). Also, the United States, the Republic of Korea, and Japan began yesterday a two day missile tracking drill in preparation for any missile or nuclear threats from North Korea (Link).

The United States, the Republic of Korea, and Japan have all deployed operational missile defense capability and capacity in this specific region that enables the defensive protection from North Korea ballistic missiles for their population of 200 million and forces, but most importantly provides more decision space, more options on the table, and more stability in resolving this accelerating incendiary Nuclear crisis with North Korea. Missile defense capacity and capability in and around Japan and Korea brings assurance of United States commitment to each of these countries, and allows these two countries not to become a nuclear weapon state to defend themselves from a nuclear North Korea.

The approximate times it would take for a North Korean nuclear ballistic missile to reach targets in South Korea and Japan.

The United States, the Republic of Korea and Japan today have a combination of three ballistic missile defense systems deployed and operational in the region: Sea Based- Aegis Ballistic Missile Defense; Land Based- THAAD and Patriot 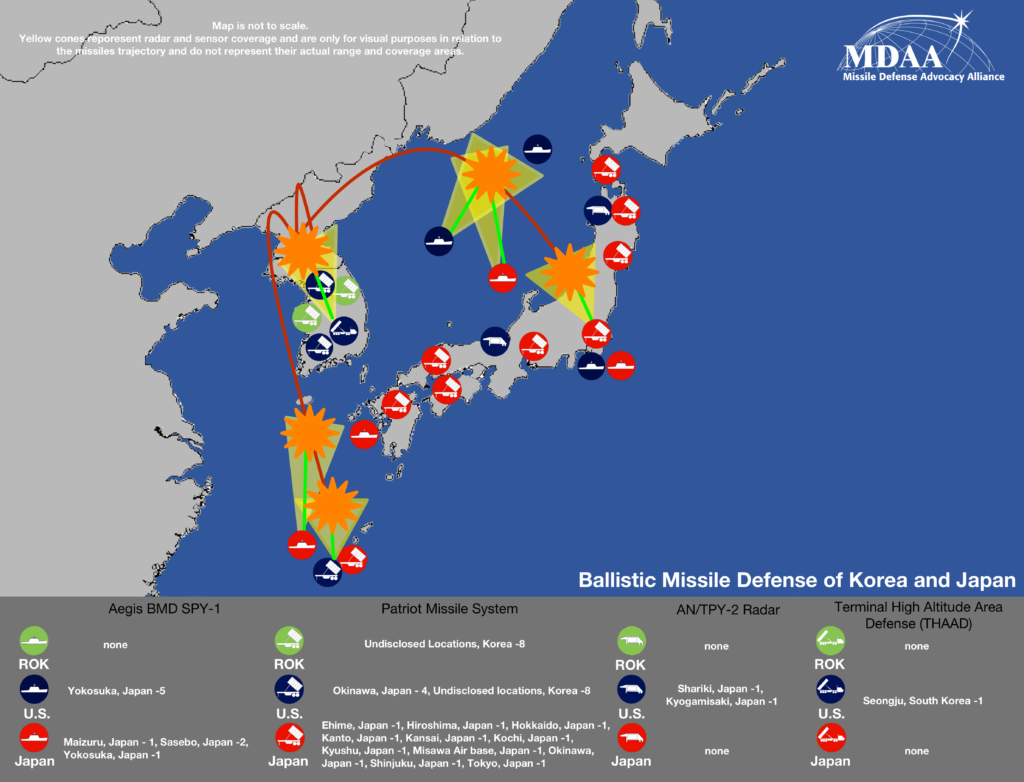 Click here to see a higher resolution version of the graphic.

The newly elected President Moon Jae-In of the Republic of Korea stated in August, “While ignoring our government and the international community’s repeated demands and warnings, North Korea staged its sixth nuclear test following a series of ballistic missile launches. And due to these developments, our security situation has become more serious than ever. Therefore, the government reached a decision that it could no longer delay the temporary deployment of THAAD to prevent war on the Korean Peninsula and protect the lives and safety of its people.” (Link)

President Moon has it right, let’s prevent war on the Korean Peninsula and protect the lives and safety of its people through the deployment of missile defense systems.