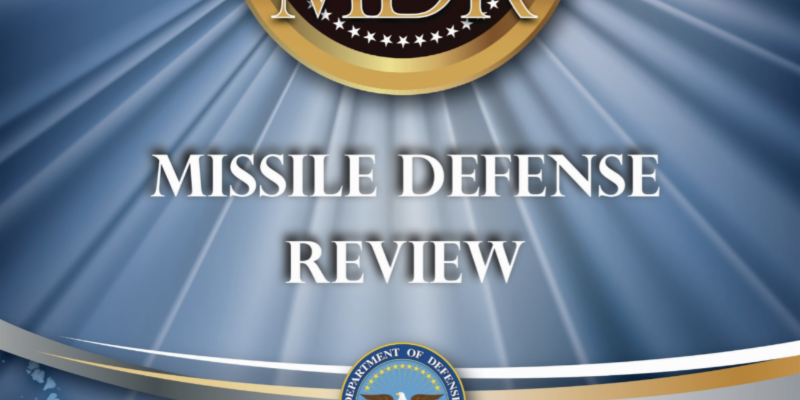 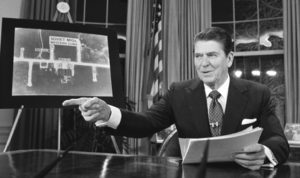 SDI was a program first initiated on March 23, 1983 under President Ronald Reagan. President Reagan called upon the scientific community to give the country the means of rendering nuclear weapons impotent and obsolete. The Strategic Defense Initiative Organization began to research technologies for defeating ballistic missiles at all stages of flight. These technologies included space-based systems and directed energy weapons. SDI programs were ultimately set aside because of political pressure and budget constraints, however, the initiative underlined the importance of missile defense and spurred forth technological breakthroughs that laid the technical foundation for modern missile defense systems.

The commission headed by former Secretary of Defense Donald Rumsfeld produced a report – initiated 6 months prior – assessing the ballistic missile threat to the United States in July 1998. Two major conclusions drawn by the commission:

A month after the report was released North Korea fired a three-stage Taepodong-1 missile over Japan and into the Pacific Ocean. Congress began pressuring the Clinton administration to begin consideration for a national missile defense system, leading to the National Missile Defense Act of 1999.


The National Missile Defense Act of 1999

The 1999 Missile Defense Act was written in response to a report from the Rumsfeld Commission, which stated that rogue nations—such as North Korea—would possess long-range missiles capable of striking the U.S. homeland within the decade. Passed by Congress, the 1999 Missile Defense Act mandated that the United States deploy “as soon as is technologically possible” a missile defense system that can defend the homeland from limited ballistic missile attack—either accidental, unauthorized, or deliberate. Congress was to appropriate annual funding to progress the capability and achieve this objective. The act also pushed for bilateral nuclear arms reductions with Russia. In all, the National Missile Defense Act of 1999 marked a turning point for strategic missile defense and led to deployment of the Ground-based Midcourse Defense system in 2004.


Withdrawing from the Anti-Ballistic Missile Treaty (2001)

In December 2001, the United States withdrew from the ABM Treaty, entering into a new strategic relationship with Russia that was to be less adversarial. Since the Treaty had entered into force in 1972, a number of state and non-state entities have acquired or actively seek weapons of mass destruction (WMDs). Some of these entities are prepared to employ WMDs against the United States and a number of rogue states are developing ballistic missiles, including long-range ballistic missiles, as a delivery system for weapons of mass destruction. As a result, the United States has concluded that it must develop, test, and deploy anti-ballistic missile systems for the defense of its national territory, its forces outside the United States, and its partners and allies. At the time, President Putin remarked, “the decision made by the President of the United States does not pose a threat to the national security of the Russian Federation,” however, Putin’s rhetoric regarding U.S. missile defense has become more condemning in recent years.

Bush administration plans during this period called for a layered missile defense system to intercept warheads at all phases of flight: boost, midcourse, and terminal phases. Although the administration made significant investments in boost-phase programs, they were ultimately cancelled by the Obama administration before reaching fruition. Midcourse and terminal phase ballistic missile defense programs developed and matured during the Bush administration and earned continued funding throughout President Obama’s two terms in office. Bush’s Pentagon also planned to deploy missile defense capabilities to Europe. This included up to 10 two-stage Ground-based interceptors in Poland and an X-band radar in the Czech Republic. These capabilities would have provided additional protection for the United States against intercontinental range missiles, however, they were later cancelled by the Obama administration and replaced by the European Phased Adaptive Approach.

NSP Directive 23 called on the Department of Defense to deploy an initial set of capabilities that would evolve to meet the ever-changing threat and take advantage of technological developments including the following measures:

The Secretary of Defense executed a limited set of initial missile defense capabilities beginning in 2004.

President Obama entered the White House skeptical of missile defense capabilities. As such, he promised in 2008 to “cut investments in unproven missile defense systems.” The Obama White House cancelled boost-phase programs and insisted on only maintaining the 30 current GMD deployments, cutting plans to deploy an additional 14. In 2013, the administration reversed this decision and called for the deployment of 14 additional interceptors by 2017. The Obama administration also cancelled Bush’s European BMD plans, replacing them with the European Phased Adaptive Approach (EPAA) in September 2009. EPAA’s goal was to deploy BMD technology that was proven, cost-effective, and adaptable to an evolving security environment. With the exception of Phase IV (which was cancelled), all phases of the EPAA are on track for deployment by 2018.

The 2010 BMDR report outlined the primary missile threats perceived by the Obama administration, along with the missile defense policies to be implemented in counter. The report concluded that the primary missile threats to the U.S. homeland are North Korea’s long-range missile capabilities and Iran’s progressing missile capabilities. Regional threats include: North Korea, Iran, and Syria. For homeland defense, the review supported maintenance of the Ground-based Midcourse Defense system. To defend against regional missile threats, the 2010 BMDR suggested short-term reliance on THAAD, SM-3, and TPY-2 radar, and long-term focus on SM-3 Block IIA and IIB, launch on remote, precision tracking, and space radar. The phased adaptive approach was implemented—the most famous example being the European Phased Adaptive Approach—employing modern missile defenses in unique ways to counter regional threats. Overall, the 2010 BMDR solidified the Obama administration’s newfound focus on regional BMD.

The 2019 Missile Defense Review outlines the major policy initiatives set forth by the Trump administration regarding U.S. missile defense. This MDR emphasized the protection of the U.S. homeland and its forces from all types of missile threats, as well as recognizing the importance of space as a new warfighting domain. Also, the MDR prioritized the elimination of slow, bureaucratic procedures, as well as developing new technologies instead of simple improvements to existing systems. Major force adjustments set by this review to the United States BMDS include the addition of three new radars, the increase of Aegis BMD-capable ships from 38 to 60, and the addition of 20 new GBIs into the existing GMD infrastructure. Finally, increased burden sharing with U.S. allies is highlighted, to ensure that a global and cooperative approach is taken  as it is more likely to succeed in the missile defense mission.


Click here to visit our resource library with links to policy-related media.