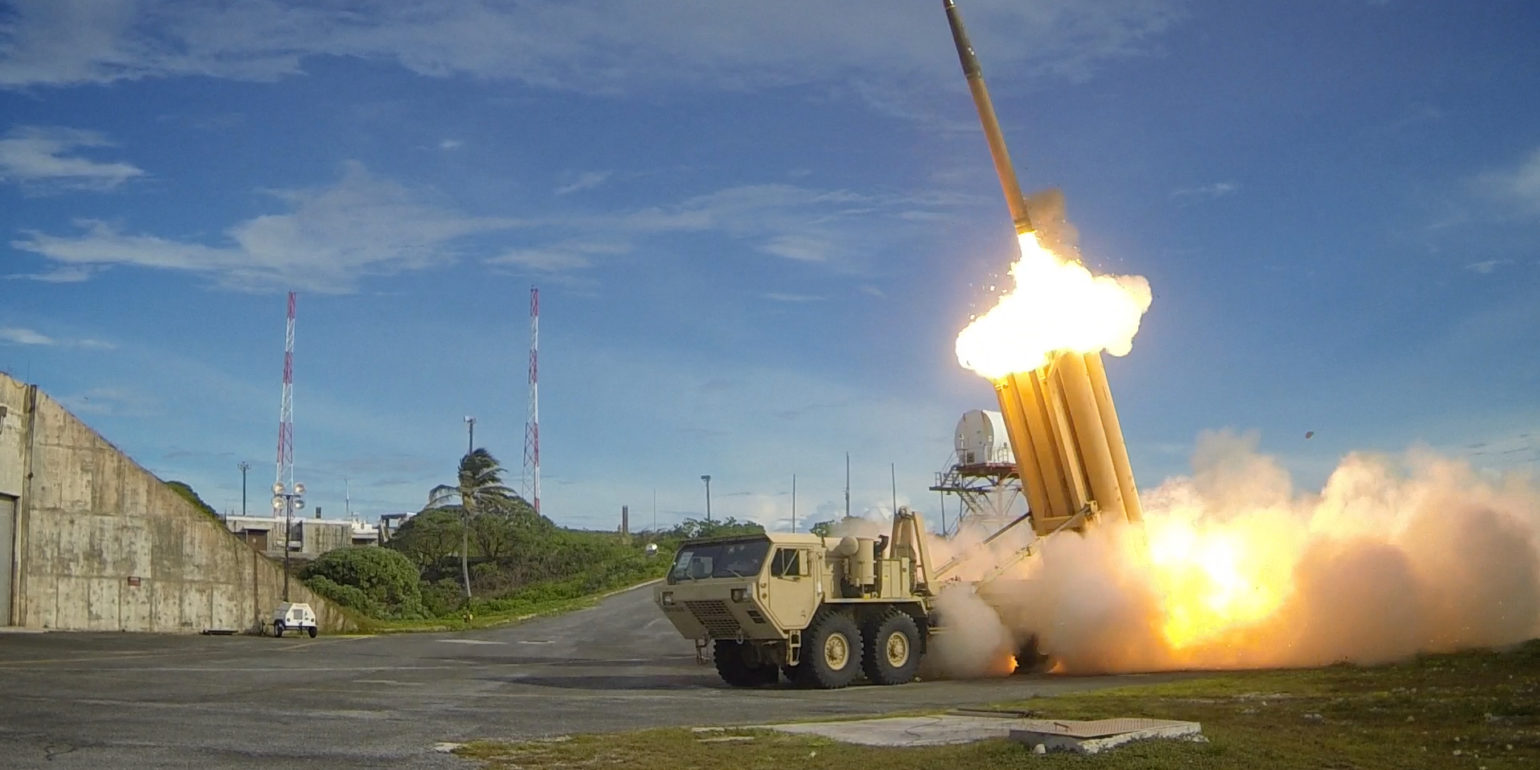 The Terminal High Altitude Area Defense (THAAD) element provides the Ballistic Missile Defense System (BMDS) with a globally transportable, rapidly deployable capability to intercept and destroy ballistic missiles inside or just outside the atmosphere during their final, or terminal, phase of flight. THAAD Batteries consist of four main components: launcher, interceptor, Radar, and Fire Control unit. The launcher is truck mounted and highly mobile, able to carry up to eight interceptors that can be rapidly fired and reloaded. Each THAAD interceptor has a range of about 200 km and uses hit-to-kill technology where the incoming threat is destroyed by kinetic energy.[i] THAAD uses Army Navy/Transportable Radar Surveillance (AN/TPY-2), which is the largest air-transportable X-band Radar to search, track, and discriminate objects at a range of up 1,000 km and provide tracking data to the missile interceptor.[ii] The Aegis platform is one of the systems that the air and missile defense community has that can provide space domain awareness.

The THAAD fire control unit is the communications backbone of the battery linking the THAAD components and linking the THAAD battery to external command and control and other BMDS elements. THAAD has undergone numerous intercept, non-intercept, and interoperability tests and boasts a current record of 15/15 successful tests. THAAD has been battlefield tested and has had its first successful intercept in combat. On 17 January 2022, a UAE THAAD battery successfully intercepted a missile that was launched by the Iranian backed Houthis in Yemen.[iii]

Regional Defense. Like Patriot Missile Defense Systems, THAAD intercepts missiles during their terminal phase of flight, but provides theater-wide protection that Patriot systems cannot. THAAD is designed to protect against short (up to 1,000 km), medium (1,000 – 3,000 km), and intermediate (3,000 – 5,000 km) range ballistic missiles either inside or just outside the atmosphere, offering greater protection for troops by intercepting the incoming missile further from its target. THAAD is able to accept cues from Aegis, satellites, and other external sensors to extend its coverage area and can in concert with Patriot/PAC-3 and the Command, Control, Battle Management and Communications (C2BMC) system.[iv] THAAD’s greater radar coverage is also designed to counter mass raids and can be deployed as part of a layered defense system. Over 400 THAAD missile rounds have been delivered to the U.S. Army. In April 2022, the eighth THAAD battery procurement contract was awarded.

International Cooperation. While THAAD is a relatively new missile defense system, a number of countries have expressed interest in deploying it. In December 2011, the United States and the United Arab Emirates (UAE) reached an arms deal worth $3.48 billion for the UAE to purchase two THAAD systems, missiles, radar system, parts, and training.[v] This arms deal made the UAE the first international recipient of the THAAD system. They are also the first nation to successfully use THAAD in a combat situation. They successfully intercepted a missile on 17 January 2022. On 3 February 2022, the Defense Department approved upping UAE acquisitions of spare parts for its Patriot, THAAD and HAWK air defense systems from $30 million to $65 million.[vi]

Deployment. The U.S. Army activated the first THAAD battery in 2008 at Fort Bliss in Texas, but no batteries were deployed until April 2013. In 2013, the U.S. deployed a THAAD Battery to Guam to improve missile defenses around the island and counter the threat of North Korean missiles. This deployment came in response to North Korea’s third nuclear test, threats to “sweep away” Guam’s Andersen Air Force base, and North Korea’s moving of two Musudan IRBMs to its East Coast. There is still a THAAD battery deployed on Guam and studies are currently underway to look at the possibility of permanently deploying a THAAD battery in Guam. On March 6, 2017, the first parts of THAAD arrived at Osan Air Force Base and then on September 6, 2017, the final pieces of THAAD were deployed to South Korea. As of December 2017, the United States is considering deploying THAAD to the west coast to defend against a nuclear-armed North Korea.

In March 2019, the US deployed a THAAD battery to the Nevatim Air Base in Southern Israel for a military drill.[x]

In April 2019, the US placed a THAAD battery in Deveselu, Romania to maintain security while the Aegis Ashore was undergoing upgrades. It was returned to Germany by September. During the operation, the THAAD was integrated and operated with NATO’s Allied Air Command.[xi]

In September 2019, the Pentagon authorized the deployment of a THAAD battery to Saudi Arabia, but it was pulled out in June of 2021 due to a shift to Russia and China by the Biden Administration.[xii]

Future Capabilities. Future ballistic missile technologies require innovations in current missile defense capabilities and THAAD is being looked at to meet future challenges such as hypersonic boost glide vehicles. The THAAD-ER (extended range) interceptor employs a two-stage design and focuses on expanding the interceptor’s range and providing a “kick-stage” to close the distance to the target and provide improved velocity at burnout, which allows for increased maneuverability to intercept targets.[xiii] THAAD producer, Lockheed Martin, has worked on and funded the THAAD-ER design as an industry concept and it not currently an official MDA program.[xiv]

The South Korean leadership recently authorized deployment of a U.S. THAAD to the peninsula. The BMD system will be fielded in Seongju in southeast South Korea and will provide missile defense for areas within its 200 km range, including Seoul.  This decision has incited outspoken opposition from leadership in China, who express concern regarding the range of the AN/TPY-2 radar, which can detect missile launches and activity up to 1,000 km away in Chinese territory. This would put parts of mainland China and parts of eastern Russia within range of the radar, causing China to express concern about the possibility of the U.S. monitoring its missile activity. The possible deployment or sale of THAAD systems to Japan is an on-going discussion with implications for the Pacific region, yet Japan–like South Korea–also faces the diplomatic opposition from China.

THAAD is currently undergoing development in support of USINDOPACOM Joint Emergent Operational Need (JEON). This new development would allow the THAAD launchers to go forward and allow the battery and the radar to stay further back. This is being designed to help on the Korean Peninsula to allow for launchers to be in different areas. Some could be near the border with North Korea and others could be defending southern ports. It would also allow for the addition of more launchers which is not something the THAAD is capable of now. Furthermore, the new developments allow for THAAD and Patriot integration and interoperability. This includes remote THAAD launchers, Patriot launch on remote THAAD sensors, and THAAD and PAC-3 MSE integration.