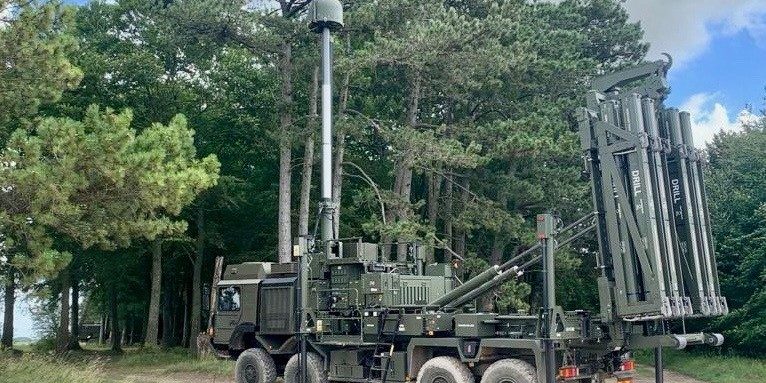 Designed to replace the aging Rapier FSC, the Sky Sabre entered operational capability in 2020 emerging as the premier air defense solution for the United Kingdom. Also known as the Land Ceptor, the air defense system provides short to medium range aircraft and missile defense against saturation attacks. The Sky Sabre was designed and produced by MDBA, Saab, and Rafael Advanced Defense Systems. Using the MBDA-produced Common Anti-Air Modular Missile (CAMM) and the Common Anti-Air Modular Missile Extended Range (CAMM-ER), the Sky Sabre is equipped to provide beyond visual range (BVR) engagement with enemy threats. The Giraffe Agile Multi-Beam (AMB) medium range 3-D radar system, produced by Saab, boasts a 360-degree, 120km detection range capable of picking up low-level targets such as small unmanned aircraft systems (UAS). Lastly, the MIC4AD is an integrated command, control, communications, computers and intelligence (C4I) system designed by Rafael, that allows for information to flow from multiple sensors and platforms, giving the operators control of all the air and missile defense systems under the umbrella of MIC4AD. Ultimately, the Sky Sabre system is capable of controlling 24 missiles simultaneously under saturation attacks of up to 24 separate targets, a major upgrade from the Rapier system.

As an upgrade from the aging Rapier system which reached operational capability in 1973, the Sky Sabre presents the United Kingdom with a much needed upgrade in road mobile, air and missile defense. Specifically, with the enhanced targeting capability, allowing the Sky Sabre to engage 24 different targets with 24 interceptors as once, this represents a major advancement from the Rapier’s ability to engage two targets at once. Overall, the Sky Sabre increases all aspects of the United Kingdom’s ground-based air defense with better interceptors, wider detection ranges, and improved C4I integration.

As the new Land Ceptor system enters its second year in operational capacity, the Sky Sabre has been deployed to Poland to defend NATO members from possible Russian air or missile attacks. It is unclear how many launchers or interceptors were deployed but the systems were confirmed to be in Polish territory by May 2022. The systems were accompanied by 100 military personnel to operate it.