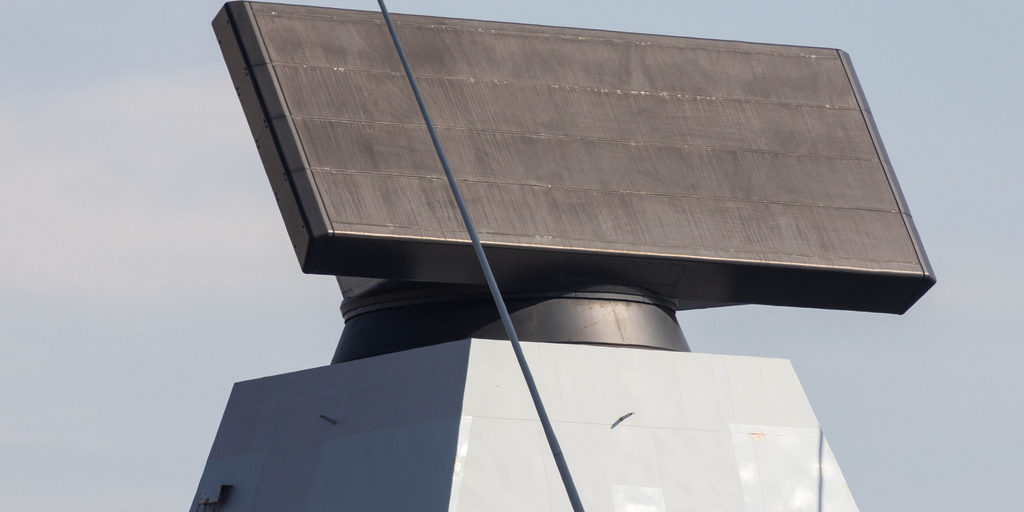 The S1850M, originally named SMARTELLO, is a long-range passive electronically scanned array radar used for wide area search.[i] It is a modified version of the Thales Nederland SMART-L radar, boasting a higher rotation speed, improved anti-jamming capabilities, a flexible signal processor and local consoles.[ii] With a range of 400 km, it is capable of tracking up to 1,000 targets simultaneously, including stealth targets. Currently, the S1850M is used by British Type 45 destroyers and French and Italian Horizon class destroyers that are equipped with Aster 15 and 30 interceptors for air and missile defense.[iii]

The S1850M radar is an especially valuable radar during times of war with multiple incoming threats as it can track up to 1,000 threats simultaneously. For example, it demonstrated this ability during testing when it tracked all aircraft coming into Heathrow, Charles de Gaulle, Schiphol, and Frankfurt airports and still had spare capacity.[iv] Also, its ability to track outer atmosphere objects at short-range make it an invaluable part of a Theater Ballistic Missile Defense system. As a long-range surveillance radar, the S1850M radar identifies and tracks aerial threats and then engages the fire control radar, European Multifunction Phased Array Radar (EMPAR) for the French and Italian ships and the SAMPSON multifunction radar for the British ships to provide information on the threat’s trajectory and calculate a firing solution. This radar allows ships to scan large volumes of air space without external cues enabling earlier detection and a better change of intercepting threats.[v]

January 2011: Thales was awarded an 18-month contract for the maintenance and support of the S1850M volume search radars installed on the Royal Navy’s Type 45 Daring Class vessels.[vi]

April 2005: The first S1850M radar was in full operation at the Horizon Short Integration Facility in Toulon, France.

1994: The S1850M radar system was selected to replace the French Astral radar as the primary long-range search radar for the Anglo-Italian-French Common New Generation Frigate.