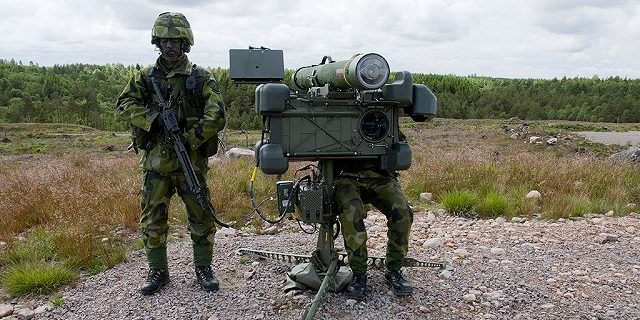 The RBS 70 is a short-range anti-aircraft missile system. The basic system consists of a missile launch container, tripod firing stand, and an optical sight. As a man-portable system, the RBS 70 is operable by one individual and portable by three. The system relies on a laser beam riding guidance system, riding the laser signal being beamed from its own launch station instead of being guided from the front towards a reflected signal from the target.[i]

It can be operated independently in stand-alone mode or configured as a nine system anti-aircraft battery linked with the Giraffe land mobile surveillance radar. The RBS 70 is equipped with a close loop cooled Clip-On Night Device (COND), giving the system day and night capability.[ii]

The RBS 70 operates with the Mk missile family as interceptors, beginning with the Mk 1 in 1977. Upgraded forms of the Mk1, the Mk 1+ and Mk 2 are the current standard missiles used, and the Bolide missile was introduced as an option in 2003. The Bolide missile is an upgrade to the Mk 2 with a new sustainer rocket motor, which increases the missile’s speed and maneuverability.[iii]

Besides upgrades to the RBS 70’s interceptor, the only system variation is the RBS 70 NG which made its public appearance in September 2011. The RBS 70 NG is an upgrade to the original system, featuring a thermal imager, built-in automatic target tracker, and common sight module. It can also operate with all existing generations of RBS 70 missiles.[iv]

The RBS 70 is a strategically valuable air defense system because of its portability and its technical capabilities. As a MANPAD system, the RBS 70 is highly mobile, making it useful in a variety of terrains. Due to the way that the laser guidance system operates, the RBS 70 is extremely difficult to jam. The system can be operated in day and night conditions, and with the Bolide missile it can be used to intercept a range of targets.

The system can be linked as part of an anti-aircraft battery, compensating for its one missile load, and as a part of the battery, its capabilities are enhanced by the use of a surveillance radar. The RBS 70 NG’s common sight module also can be integrated with multiple platforms, from MANPADS to combat vehicles.

March 2017: Saab received an order from the Brazilian Army for the delivery of the RBS 70[v]

September 2011:The RBS 70 NG is shown during the Defense & Security Equipment International exhibition[vi]

January 2010: The Finnish army signed a $35.5m contract for further deliveries of the RBS 70[vii]

December 2004: The Czech Republic orders the RBS 70 with the Bolide missile[ix]

November 2004:Latvia orders the RBS 70, and Norway hands over a number of RBS 70 systems to Lithuania free of charge[x]

2003:Australia orders the RBS 70 with the Bolide missile[xi]