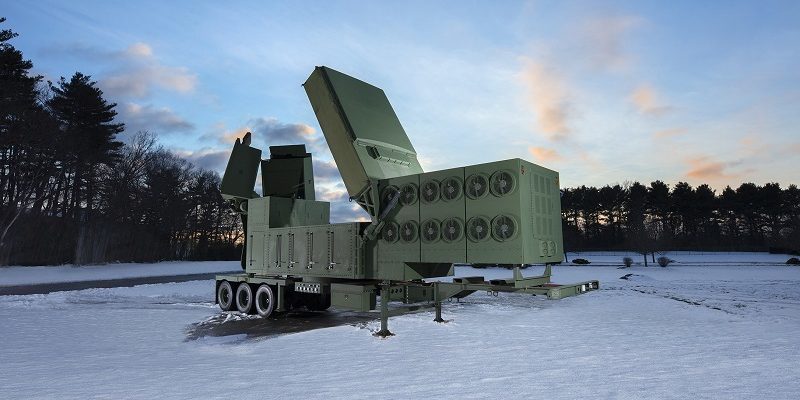 The Lower Tier Air and Missile Defense Sensor (LTAMDS) is a modern 360-degree, multi-mission sensor with a high degree of cross-functionality, interoperability, and modularity. It is the first sensor designed specifically for operations within the Army’s Integrated Air and Missile Defense architecture and provides defense against the most advanced threats including tactical ballistic missiles, aircraft and cruise missiles.  LTAMDS has long reach sensing over 360 degrees of battlespace and the ability to detect and track high-speed maneuvering targets and provide data to the network. Raytheon created LTAMDS to replace their existing AN/MPQ-53/65 Radar in use by the U.S. Army for the Patriot missile system. Six prototypes are being manufactured by Raytheon for testing and they are expected to be ready for testing by the end of the 2022 fiscal year. The LTAMDS is expected to play a key role in the U.S. Army’s future Integrated Air and Missile Defense System (IAMDS).[i] Its advantage over other competing systems comes from its ability to detect threats across a 360-degree view of the battlefield and at ranges exceeding those of today’s current missile defense radars and missile systems.

LTAMDS uses Gallium Nitride (GaN) technology instead of gallium arsenide (GaS) in the LTAMDS semiconductor material to “bring advanced capability to soldiers faster than ever before.”[ii] A major bonus beyond the greater signal strength and sensitivity of GaN-based transmitters is the LTAMDS will not need to be recertified within its lifetime.[iii]  Another advantage of GaN is that it wastes less electrical energy as heat than GaS.[iv] With the ranges of offensive missile systems growing each year, Raytheon’s commitment to improving on their past systems includes a focus on detecting threats at greater distances and from any vector of attack.

The LTAMDS achieves 360-degree detection by having multiple radar panels.  There is a large main radar array on the front of the trailer that folds down to resemble a normal trailer for an 18-wheeler.[v]  On the back of the trailer, there is two smaller fold down radar arrays that face out to the right and left at an angle.  The sectors of the three arrays are enhanced by the utilization of GaN, leading to the sectors being overlapping providing the 360-degree coverage.  According to Doug Burgess, Senior Director of Ground-based Integrated Air and Missile Defense Capabilities at Raytheon, “one of the secondary arrays has more capability than the current Patriot radar, so consider the defense capability of just one of these arrays – a variant of LTAMDS – that could be used for counter-cruise missile defense.”

LTAMDS uses C-band radar for its primary mission, however, the dual-band frequency functionality is an important design feature to meet the needs of the Army to fill capability gaps for decades to come.  The LTAMDS uses S-band and X-band frequencies for missile communication, to include target acquisition through deep surveillance.  The multi-band system leverages the strength of GaN technology and allows the LTAMDS to have the modularity to be plugged into a versatile set of weapons systems as well as provide a more complete data set to IBCS nodes. The S-band frequency is ideal for surveillance and target acquisition while the X-brand frequency provides data for discrimination and fire-control.[vi]

The LTAMDS has gone through rapid development and prototyping. The notice for contract bidders was put out in 2017 and the Army picked Raytheon in October 2019. In between that time the Army had conducted a “sense off” at White Sands Missile Test Range in spring/summer 2019. The program has moved so quickly to fielding due to circumventing the traditional, cumbersome DoD acquisition process known as DoD 5000. The Army has used both the Other Transaction Authority (OTA) and Section 804 Mid-Tier Acquisition processes to shortcut.[vii]

In February 2020, it was announced that Raytheon had finished the first front array radar for LTAMDS. This was completed in less than 120 days after Raytheon had been awarded the contract.[viii]  LTAMDS program’s initial operational capability (IOC) is forecast for 2022. After IOC, Mr. Bob Kelley, the company’s Director of IAMD Business Development and Strategy, offered that Raytheon “expects the government to conduct a competition for low-rate initial production for an additional 16 LTAMDS radars. And then beyond that, the Army has said this will be a one-for-one replacement for the PATRIOT radar. The U.S. Army has more than 80 of these in the inventory.”[ix]

Raytheon has so far chosen two subcontractors to deliver specific capabilities for the LTAMDS radar. Crane Aerospace & Electronics was chosen in November 2019 to provide power systems for power control and conditioning. Raytheon announced Orolia USA as a subcontractor in July 2020. Orolia will deliver position, navigation, and timing (PNT) capabilities for the LTAMDS with their SecureSync program.[x]

The LTAMDS radar will provide Patriot missile battalions with increased sensing capability with visibility and persistence previously unknown. With 360-degree coverage, creating integrated air defense networks would require fewer launchers and radars for a given area. This would allow Patriot battalions to disperse over a wider area, increasing their operational footprint while simultaneously making the formation more resilient to adversary precision fire.

The Lower-Tier Air & Missile Defense Sensor has evolved from a replacement for the aging  AN/MPQ-53/65 Radar Set into a multi-purpose radar that can share data with multiple kinds of command posts and launchers, not just Patriot, over the Army’s new Integrated Air and Missile Defense Battle Command System (IBCS) network.[xi] Integration with the IBCS network is critical to next-generation missile warfare that calls for offense-defense integration (ODI).  IBCS hooks into the Army’s next-generation TITAN battle network, which is part of the Department of Defense’s Joint All-Domain Command and Control (JADC2) initiative to create a joint “network of networks” to connect sensors and shooters across the Joint Force.

October 14, 2019: Mockup of LTAMDS is revealed in public for the first time at AUSA’s annual conference.