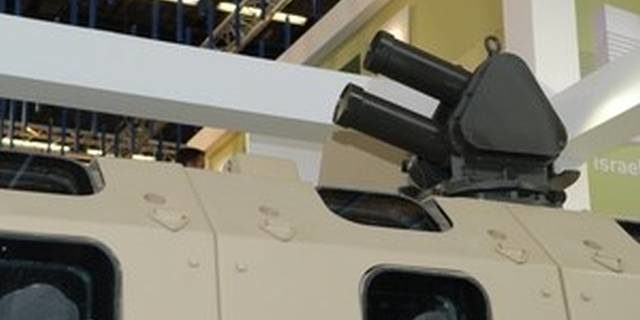 IMI Systems’ Iron Fist uses a radar to detect, track and intercept incoming rocket-propelled grenades and anti-tank missiles among other threats to the vehicle and its crew.[i]Iron Fist is expected to provide multi-level protection against anti-tank threats, from short range tandem-warhead rockets that demonstrated their ability to defeat reactive armor, to sophisticated, heavy guided missiles such as the Kornet, employed by the Hezbollah during the 2006 2nd Lebanon War. The system has also been designed to counter tank fired (kinetic) threats.[ii]The system uses a fixed radar sensor, mounted on the protected platform, to detect potential threats, measure distance and trajectory, providing the fire control system with data for calculation of engagement plans.[iii]The interceptor, shaped similar to a small mortar bomb, is designed to defeat the threat even when flying in very close proximity. Unlike other systems, the Iron Fist uses only the blast effect to defeat the threat, crushing the soft components of a shaped charge or deflecting and destabilizing the missile or kinetic rod in their flight.

Iron Fist may provide greater security for tactical forces, which could lead to greater success strategically. Having the ability for troop vehicles to survive projectile attacks will lead to less casualties in the field, and assist in the mission overall. However, this potential safety provided by Iron Fist may force adversaries to seek alternatives to anti-tank/projectile based attacks, and create a heavier reliance on tactics such as Improvised Explosive Devices (IEDs).