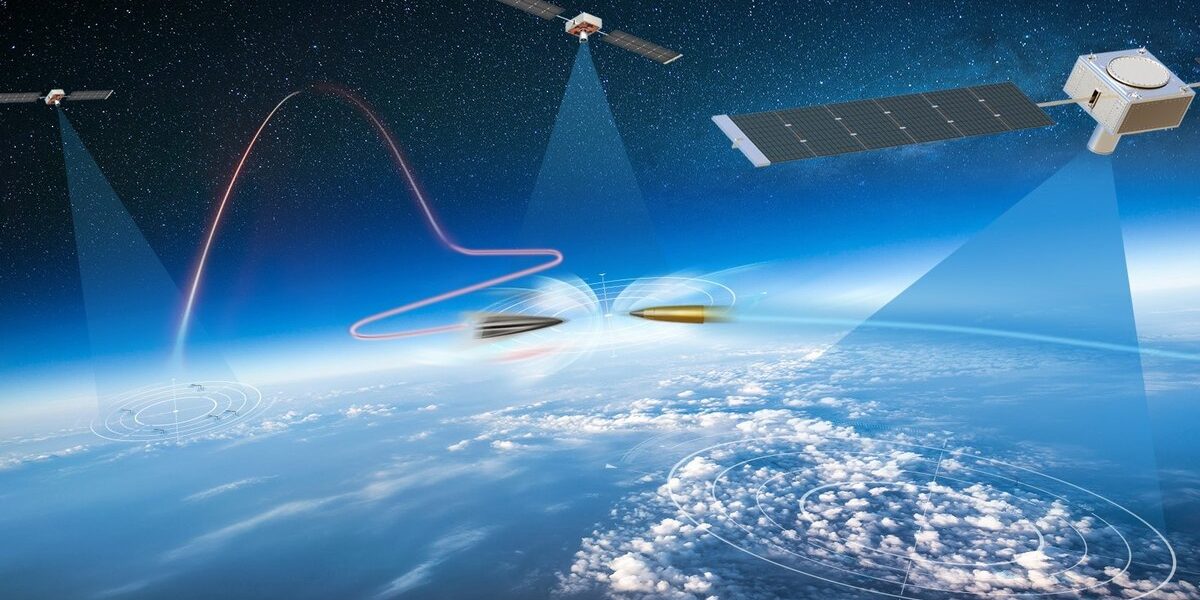 As a part of the 2019 Missile Defense Review (MDR), the Trump Administration called for studies into space-based sensor systems. The Hypersonic and Ballistic Tracking Space Sensor (HBTSS) is the product of that research and the need for continuous tracking of inbound ballistic and hypersonic missiles. HBTSS is expected to provide birth to death tracking of ballistic and hypersonic missiles, which will include detection, tracking, and discrimination of these capabilities. HBTSS will ultimately be folded into the planned sensor infrastructure of the Space Development Agency’s (SDA) missile tracking layer. It will be a part of SDA’s new architecture that will consist of hundreds of satellites in low Earth orbit (LEO) and which communicate with each other and work together to detect and track enemy weapons.[i]

The SDA missile tracking layer itself is a constellation satellites, with wide field of view sensors, in LEO designed to work together in a network to detect and track targets in the land, sea, air, and space domains. The HBTSS will be one of dozens of new satellites with medium field of view sensors (MFoV) and will provide fire control data to missile defense systems to intercept incoming threats. A combination of wide and medium field of view sensors is critical to track and maintain custody of hypersonic missile capabilities, such as the Russian Avangard and Chinese Starry Sky-2 hypersonic glide vehicles (HGVs). The maneuverability and speed of HGVs allow them to travel around and through coverage areas of terrestrial radars and sensors. HBTSS will provide continuous track and custody of these HGVs and ballistic missiles during flight, which will enable missile defense systems to intercept threat missiles before they reach their target.[ii]

Initially, the Air Force Space and Missile Systems Center’s Space Enterprise Consortium received 12 bids on behalf of MDA for the HBTSS. In October 2019, MDA selected four of the bids from Northrop Grumman, Raytheon, Leidos and L3Harris. Each company was provided $20 million to design a prototype sensor payload by October 31, 2020.[iii]

Congress expressed skepticism and concern when the MDA’s Fiscal Year (FY) 2021 budget stated that the funding for the HBTSS had been moved to SDA. MDA Director Vice Admiral Jon Hill responded by saying that these changes would not impact the fact that MDA was still in charge of the sensor developments for HBTSS; the only thing different was that now SDA would provide the funding to MDA which will allow for easier incorporation into SDA’s LEO constellation when the satellites are deployed in 2023. [iv]

SDA recently said in a request for proposals released on May 11 that it wanted to launch an initial constellation of satellites that are able to track hypersonic missiles in in orbit by FY22, known as Tranche Zero. This tranche will see the deployment of 20 small satellites. Eight of these satellites will be Wide Field of View (WFoV) satellites which possess infrared sensors capable of tracking hypersonic missiles. This will be the first step in creating a network of interconnected satellites operating in LEO. Tranche Zero will be followed by Tranche One with approximately 150 satellites reportedly scheduled to be deployed in FY24. It will include both WFoV and MFoV satellites. A second update, Tranche Two, is scheduled for FY26 and will complete the nearly 1,000 satellite mesh-like network.[v]

They will be implemented into SDA’s transport layer satellites as part of the network’s optical inter-satellite cross-links which will collect data and distribute them from one satellite to another.

SDA outlined eight goals for the WFoVs in its report which includes the development of space vehicles with sensors that can detect hypersonics from low Earth orbit, communicate with each other in space and with ground-based units, demonstrate interoperability and successful data transferring between different satellites, and overall good infrastructures and algorithms that enhance the communications bandwidth.[vi]

One of the goals of the space sensor layer is to provide eventual global coverage. SDA Director, Dr. Derek Tournear explained during MDAA’s June 4 event, “What we want is at the end of FY24, which is Tranche 1, we want to have IOC, which will give regional persistence so we could focus on different area. And then Tranche 2 in FY26, we would have global coverage.”

Current missile defense systems are built without the capabilities necessary to effectively track and kill hypersonic weaponry. Hypersonic weaponry is designed to outmaneuver contemporary detection systems through its speed and hyper-maneuverability capabilities. By the nature of its creation, a hypersonic missile such as HGVs is designed to avoid areas known to have missile defense infrastructure, weaving a path to their target unperturbed. While hypersonic missiles are detectable by infrared-sensing satellites, they are 10-20 times more difficult to detect due to their maneuverability as they near their target. Additionally, a possibility exists that during launch a hypersonic missile may not always emit an infrared plume, or one that is large enough to detect. This will prevent current infrared tracking systems from detecting the launch.[vii] Ballistic missiles lack the counter-detection capabilities that hypersonic missiles achieve through their ability to weave paths through traditional anti-ballistic missile defenses and anti-aircraft missile defenses. However, ballistic missiles make up for this lack of maneuverability in their sheer speed, that allows them to outpace and overwhelm tracking capabilities as advancing technologies enables them to increase in speed.[viii] With speeds reaching Mach 8, or eight times the speed of sound, the BrahMos-II, a joint-venture creation of Russia and India, has the potential to simply outrun today’s arsenal of missile defense sensors and batteries. Additionally, with a price of only $2.75 million, this can easily be mass-produced and deployed in a manner that can simply overwhelm a country’s defenses through speed and numbers. HBTSS stands to sew up those detection gaps in our current missile defense infrastructure and assist missile defense batteries in countering the United States’ adversary’s advancements in offensive hypersonic and ballistic missile capabilities.

2023: First HBTSS satellites to be deployed into LEO

June 5, 2020: SDA released request for bids for a tracking phenomenology experiment with the purpose of developing sensor algorithms for the HBTSS satellites.

March 12, 2020: At a Congressional hearing, MDA’s director announces that despite program funding moving to SDA, the development of HBTSS will remain with MDA.[ix]

October 4, 2019: SDA’s budget request is reported to include a five-year plan to develop a communications constellation made of over 250 satellites, including the MDA’s HBTSS system.