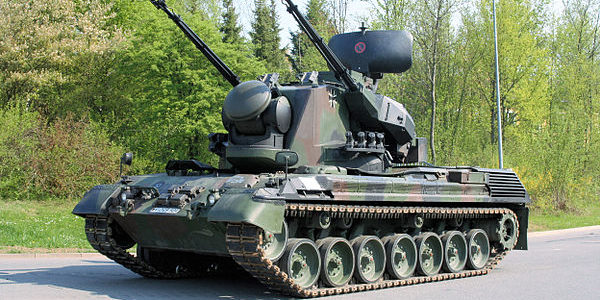 The Gepard Self-Propelled Anti-Aircraft Gun (SPAAG) consists of twin Oerlikon GDF 35 mm guns mounted on a Leopard 1 tank chassis.[i]The turret can swivel 360 degrees, providing a full range of coverage for the system. The Gepard’s search and tracking radars are also mounted on the chassis, behind the turret and in front of it, respectively.[ii]

The system is operational in Romania and Chile, both having purchased systems from Germany. The system’s three original users, Germany, Belgium, and the Netherlands have all retired their units.[iii]

An improved variant of the original Gepard, the Gepard 1A2, was developed to operate a new fire control system, which increased the system’s range and reduced its reaction time. The variant also uses different ammunition than the original.[iv]

The Dutch variant of the German Gepard is the Gepard CA1 which operates different radar than the original.[v]

1973:Gepard entered into service with the German Army.[viii]

1960s: Development of the Gepard begins[ix]