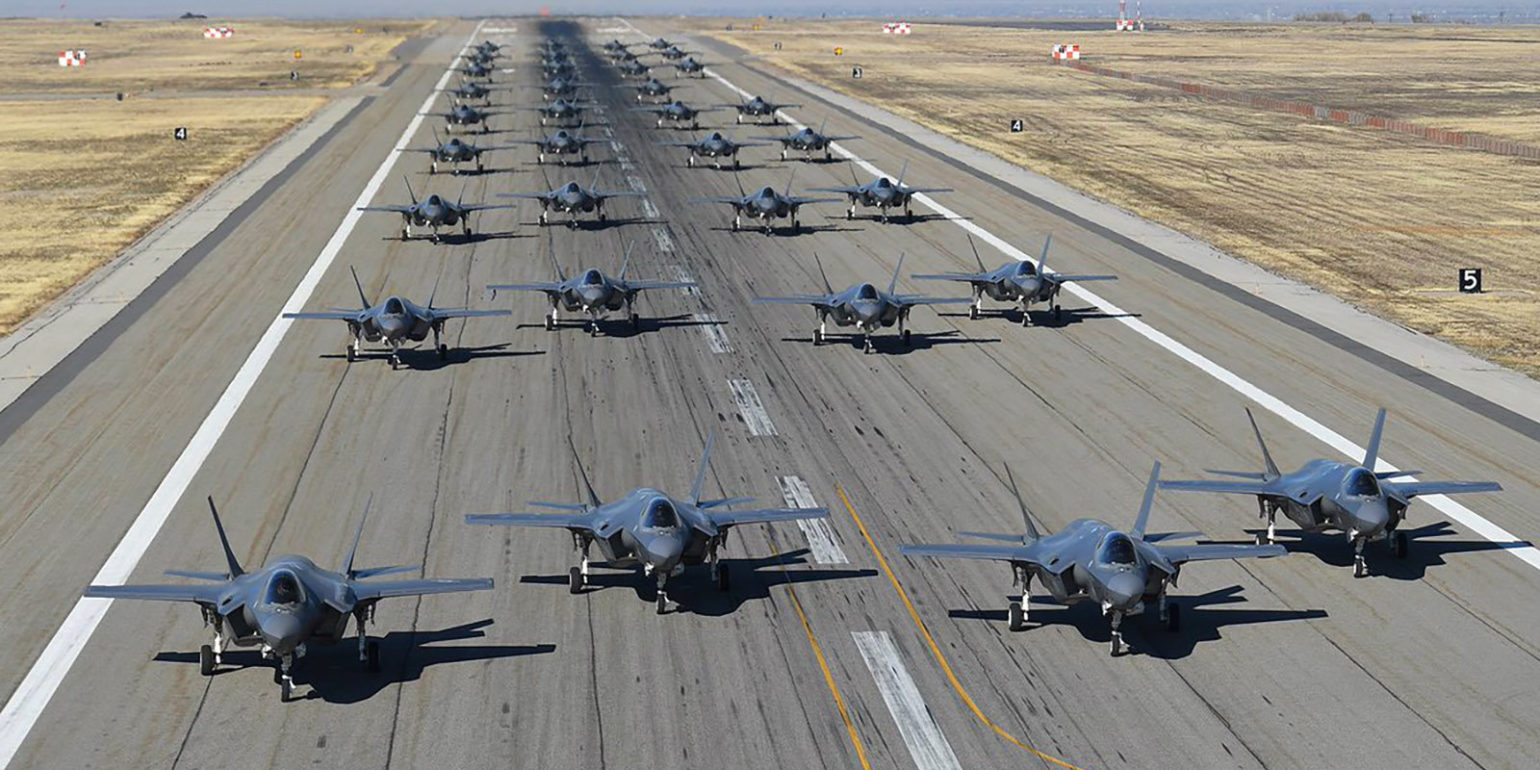 The F-35 Lightning II is one of only two 5th generation fighters in the world. It combines advanced stealth capabilities with fighter aircraft speed and agility, fully fused sensor information, network enabled operations, and advanced logistics and sustainment.[i]More than 400 aircraft have been delivered as of 2019 and production rates are expected to keep increasing over the next few years to fulfill the rest of the F-35s already ordered.[ii]

There are three variants of the F-35, the F-35A, F-35B, and F-35C. The variants were designed to accommodate different methods of takeoff/landing.

F-35A: The conventional takeoff and landing (CTOL) variant, designed for conventional runways. The F-35A is the most popular variant and the most maneuverable.[iii]

F-35B: Designed for short takeoff/vertical landing (STOVL), the F-35B can operate from short-field bases, air-capable ships, or the conventional long runways.[iv]The F-35B features a shorter wingspan, and a shorter range than the other 35A and C variants.[v]

F-35C: The Navy’s first stealth fighter, this variant is designed explicitly to takeoff/land on the deck of aircraft carriers.[vi]The F-35C is the largest of the variants, with an 8 ft longer wingspan and 4 ft longer horizontal tail span.[vii]

Advanced situational awareness for the F-35 is provided by the AN/AAQ-37 Distributed Aperture System (DAS). The DAS is a 360-degree, spherical situational awareness system. It is comprised of six electro-optical sensors, one on each side of the plane, and warns the pilot of incoming threats, provides day/night vision, and supports the navigation function of the F-35s forward-looking sensor.[viii]

A key part of the F-35’s communication, navigation and identification suite (CNI) is the Multifunction Advanced Data Link (MADL). MADL is a high-data-rate, directional communications link which allows pilots to securely and automatically share their situational awareness data with other F-35s.[ix]

The F-35 is equipped with an X-band AN/APG-81 AESA radar. Designed specifically for the F-35, the radar enables pilots to effectively engage targets at long-range and also provides situational awareness for enhanced survivability.[x]

Following the MDA’s study on the integration of the F-35 into the missile defense architecture, the jet fighter may be used for boost-phase interception of missile threats. According to the MDR, and comments from the Undersecretary of Defense for Researching and Engineering Michael Griffin, this would likely require the development of a new air-to-air interceptor.[xi]

The F-35 has a number of advanced systems, including the most powerful and comprehensive integrated sensor package of any fighter aircraft in history.[xii]Included sensors such as the AN/APG-81 AESA radar and the DAS can be used for missile defense purposes in the boost phase, and for integrating with other missile defense systems.[xiii]If a single F-35 senses a missile launch, the quickest and best response can be launched due to the MADL’s fast transmission speed and interoperability.

There are a number of benefits to the F-35’s possible boost-phase intercept capability. Not only are missiles in the boost-phase slower than other phases and more easily intercepted, but they are more likely to land in area controlled by the country or group responsible for the launch. This would make attribution of the launch significantly easier.

The potential missile defense role for the F-35 is game-changing due to its stealth and survivability. The airframe is a major component of Naval Integrated Fire Control- Counter Air (NIFC-CA), in which stealthy platforms penetrate enemy air space and transmit intelligence, reconnaissance, and surveillance (ISR) data to airborne or ground-based command and control centers such as the E-2 Hawkeye. The F-35C will be able to penetrate anti-access/area denial (A2/AD) zones after takeoff from an aircraft carrier and facilitate remote-launching of anti-air or anti-missile interceptors, for example an Aegis SM-6.