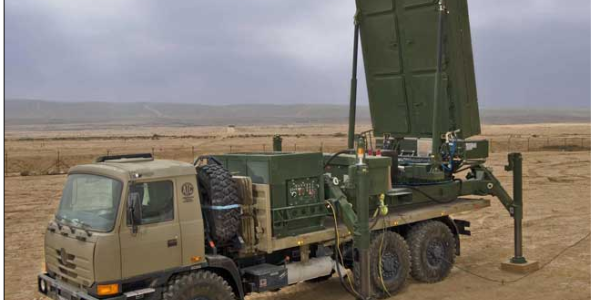 Elta’s ELM-2084 is a Multi-Mission Radar (MMR), purposed for air defense, that detects the nature of incoming rounds and sends that information to the Iron Dome or David’s Sling to intercept the incoming projectile.[i]The system is also purposed to detect artillery and can locate the source of enemy artillery fire and predict the trajectory and point of impact within the friendly zone for incoming artillery shells, missiles and mortars. This radar is equipped with an “advanced active electronically steered array (AESA)” which allows it to compile a 3D Air Situation Picture in real time.[ii]The physical radar rotates in accordance with incoming projectiles to update the air picture and accurately track projectiles through flight.

The ELM 2084 uses an S-Band radar that can detect up to 1,100 different targets simultaneously at a maximum range of 470 km.[iii]  The radar system consists of high mobility features that allow it to be moved on short notice. Additionally, the ELM 2084 has remote operation capabilities, allowing operation from a distance.

The ELM 2084 MMR serves as the primary radar for the Iron Dome. It is estimated that 10 Iron Dome systems paired with the MMR are deployed in Israel.[iv]This system has a 90% success rate with over 1500 intercepts of incoming targets. The ELM 2084 also serves as a radar for David’s Sling which the Israel’s Defense ministry recently delivered to the Israeli Air Force. Singapore is currently in the process of integrating the ELM 2084 in their defense plan. Singapore debuted its MMR at the ‘Cope Tiger 2016 drill in Korat, Thailand.[v]

March 2018: The Czech MoD deferred the ELM 2084 MMR deal over concern for its interoperability with NATO-compliant systems.[vi]

March 2016: Singapore acquired the ELM 2084 MMR. The country added the ELM 2084 as part of their plan for an “enhanced island air defense system.” The MMR was the last edition to their multi-layered defense program against aerial attacks.[viii]

July 2015: Canada’s Defense Department contracted Elta Systems’ to make the ELM 2084 the official Multi-Mission Radar for the Canadian Army. The contract ensures the delivery of 10 systems within three years.[ix]

April 2011: The MMR became fully operational in conjunction with Israel’s Iron Dome defense system. Iron Dome was deployed to Beersheba in March and had its first successful intercept in April with the aid of the ELM 2084.[x]

December 2008: The ELM 2084 was first used in support of military operations in the Gaza Strip.[xi]