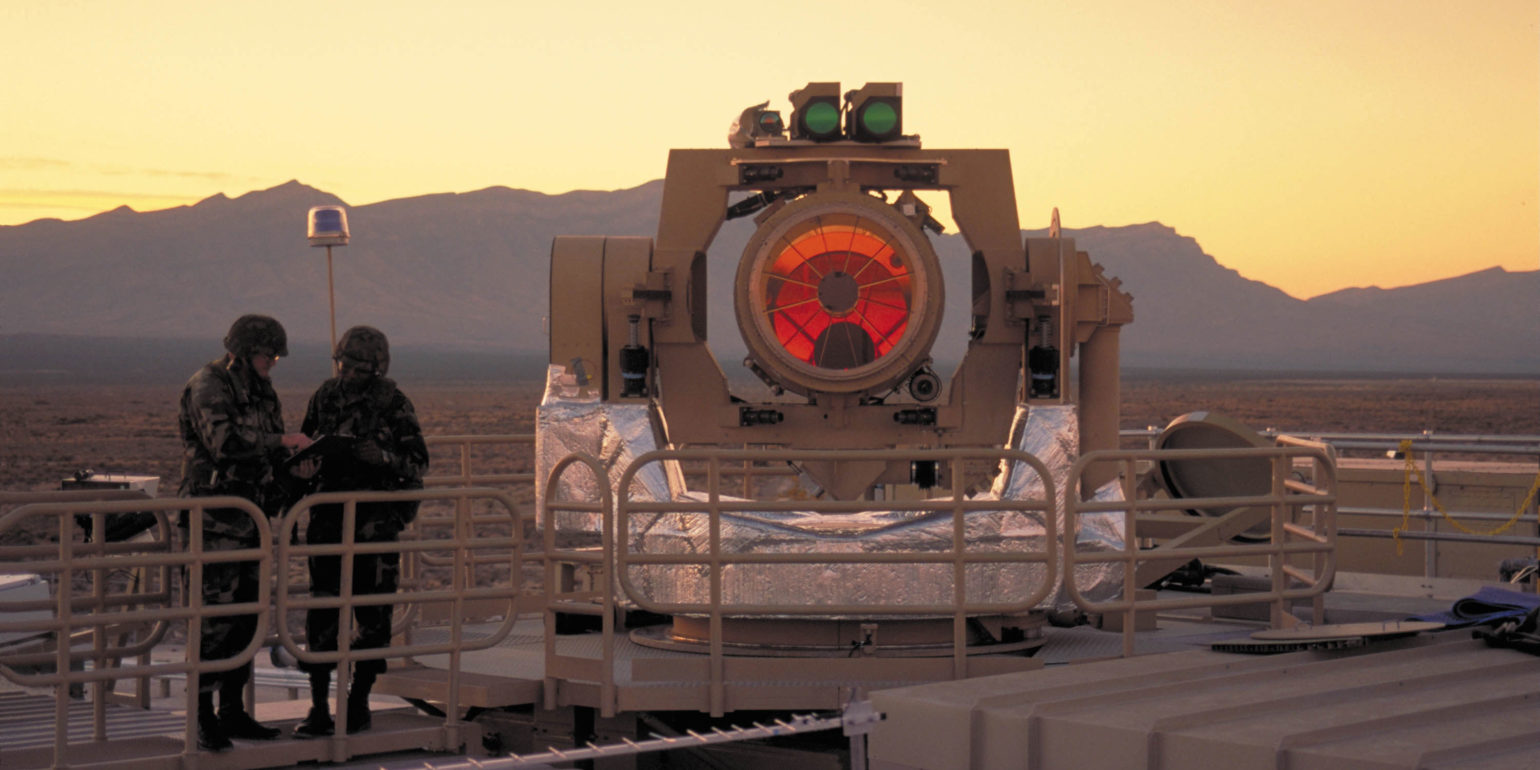 Directed energy weapons stand as a potentially tremendous development for any missile defense system, both in their own right and as a complement to kinetic weapons systems. Directed energy weapons use high-energy lasers or high-power microwaves, as opposed to the projectiles of traditional kinetic weapons. High-powered microwave systems emit electrically-powered pulses of microwave radiation at a wide angle to negate threats, while high-energy lasers direct highly focused beams of lower-powered energy—using chemical fuel or electric power—at their target. To date, most research and development in directed energy has focused on laser-based systems that use chemical, solid-state, or free electron lasers to destroy targets.

Directed energy systems are being developed and demonstrated by the Army, Navy, and Air Force and are viewed as potential weapon systems for targeting missiles during the boost phase of flight, although operational technology with that capacity is still a ways away. In particular the technology could prove useful against enemy missiles in the boost phase – providing a much longer time to get a positive ID and react, a much deeper magazine, rapid retargeting and a safe standoff range. Further, proponents of laser weaponry argue that the expense of lasers would be mostly front-loaded with large investment needed in R&D but relatively cheap operation of the weapons once developed.

Most current laser-based weapons are in the tens of kilowatts of power and are used at shorter ranges for surface and low-altitude operations, where they are meeting or exceeding requirements and helping researchers develop a concept of operations (CONOPS) for future systems. [1] National laboratories and industry leaders are also working to develop a laser-based system able to be outfitted on planes or UAVs due to the deficiencies of stationary ground-based laser air defense systems. Airborne laser systems could cover much more area, but there are issues with deployment of scalable lasers, as well as issues with de-confliction due to the straight path lasers take, creating a high risk for collateral damage. As such there is debate within the military community as to whether the first step with these airborne systems will be to put in place offensive lasers, targeting relatively static soft targets with limited potential for collateral, or the more difficult prospect of deploying airborne defensive lasers.

Chemical lasers use the energy-producing reaction caused by a mix of chemicals in their gaseous states to create atoms and ions in excited states that can be focused on a point by a lasing medium. The reactions must take place at very low temperatures, which requires a series of vacuum pumps, chemical management systems, and low-pressure reaction chambers. All of this equipment takes up a significant amount of space and requires toxic chemicals, limiting the number of platforms that can house chemical lasers. Chemical lasers also require a significant amount of chemical feedstock to equip the war fighter with a large enough magazine to take multiple shots. The ALTB used a chemical oxygen-iodine laser (COIL), which has been the most developed chemical laser concept, to produce the megawatts of power required for boost phase missile intercepts.

In contrast to chemical lasers, solid-state lasers (SSL) use electrical energy and a ceramic or glass-like solid as a lasing media. The shape of the lasing media differentiates the three types of SSLs: bulk lasers, fiber lasers, and thin-disk lasers. Bulk and thin-disk lasers both use glass or crystalline slabs of various thickness coated with elements whose excited ions produce the beam. Fiber lasers use strands of fibers, much like optical fibers, coated in similar elements to slab style lasers. Outputs of multiple SSLs can also be combined to generate a single beam with a higher output. While these systems require less space to house components than chemical lasers, they have yet to produce sufficient power in the beams to pierce ballistic missile casing.

The Navy has worked on developing free electron lasers (FEL), which uses beams of electrons accelerated to nearly the speed of light by rings and powerful magnets.  These rings and magnets then “wiggle” the electron beams into a focused beam of laser photons, which can be tuned to different wavelengths to adjust to different atmospheres, making them adaptable in the maritime environment. The Navy hopes to produce a multi-megawatt FEL in the 2020’s. To accomplish that and turn an FEL into a deployable system, work will need to be done to increase the efficiency of its energy use, regulation of thermal loads and shielding of systems of personnel.

While directed energy systems have tremendous potential, particularly against threats like slow moving UAVs and hypersonic missiles that conventional weapons struggle against – they face numerous technological and operational challenges. They must increase power to cover long distances and be more lethally effective – especially if targeting enemy missiles in boost phase (shortening wavelengths to increase force). The missile must become more scalable towards a deployment module adaptable for integration on a variety of platforms, and with improved cooling capacity. Further, stabilization of the laser and control in cluttered air space must be improved for de-confliction (avoiding collateral damage when shooting at a mobile airborne target).

Even beyond the technological obstacles, massive strides must be taken in developing tactics, techniques and procedures (TTP) and rules of engagement (ROE) before acquisition and operational integration with kinetic arsenals. Additionally, tremendous investment is necessary for integration of HEL systems, beyond even developing the actual technology in a lab. Although initial production on some short range laser systems has taken place, including the Navy’s LaWS, all these obstacles must be further explored and overcome before any effective DE system – particularly against targets like ballistic missiles – can become a program of record, let alone deployed operationally. [2] 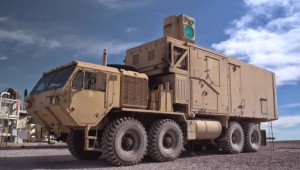 This U.S. Army system is being developed to provide force protection against rockets, artillery, cruise missiles and UAVs. The system was successfully tested in 2013, downing more than 150 targets, including mortar shells and UAVs in flight. During testing, the HEL MD also showed an ability to operate in inclement weather, including rain, high wind and fog.

The HELLADS is a Defense Advanced Research Project Agency (DARPA) project to develop a 150 kW, solid-state laser weapon that is ten times smaller and lighter than current lasers with similar power. The smaller size of the laser would enable it to be integrated onto tactical aircraft to reduce threats from the ground. In May 2015, HELLADS moved from laboratory development to field testing at White Sands Missile Range in New Mexico. 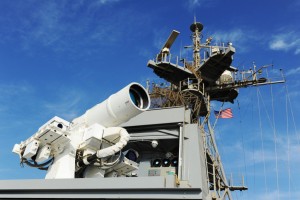 The U.S Navy’s LaWS is designed to address multiple threats using a range of options, from non-lethal, optical “dazzling” and disabling, to lethal destruction of targets such as small attack boats, helicopters, and UAVs. It could prove to be a pivotal asset against what are termed “asymmetric threats,” which include small attack boats and UAVs. LaWS is operated by a video-game like controller and is guided by the Phalanx system. In summer 2014, LaWS was mounted on the USS Ponce for further testing and successfully engaged its targets, leading to the system’s deployment in the Persian Gulf. In the future, the Navy hopes to expand the power available to lasers to allow them to counter antiship ballistic missiles.