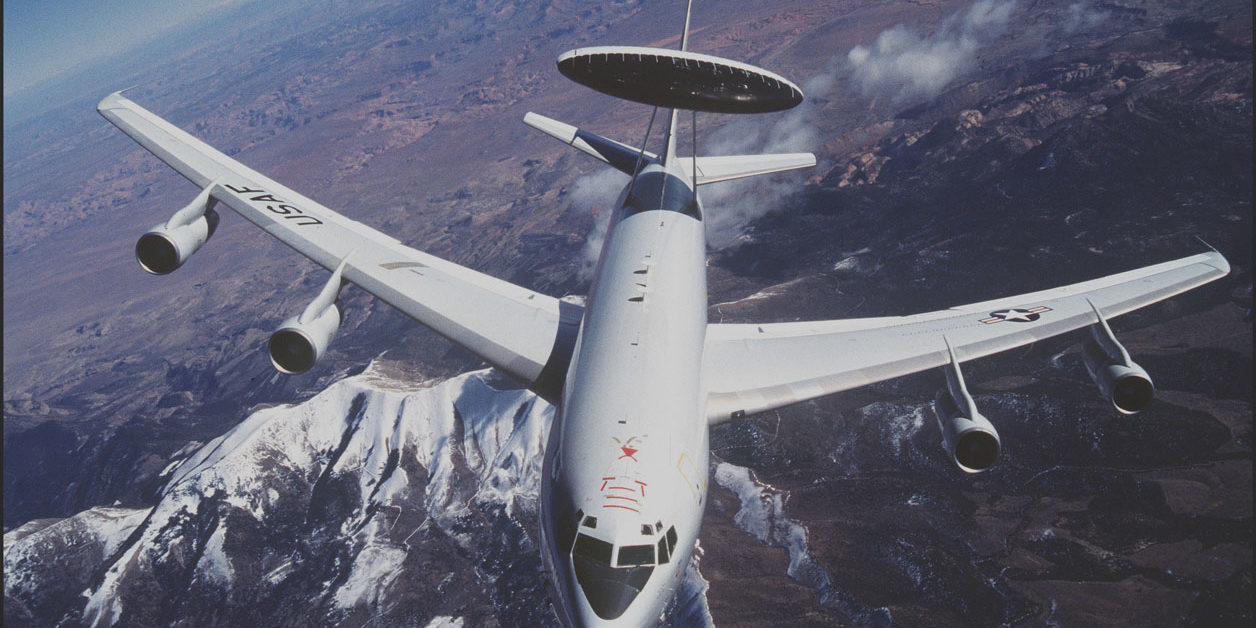 An AWACS from the 966th AWACS, Tinker AFB, OK, flies over the New Mexico mountain ranges while on a training mission.

The Boeing E-3 Sentry Airborne Warning and Control System (AWACS) contains an integrated command and control battle management (C2BM) system, designed to provide battlespace situational awareness to Air Operations Centers. It is operated by 5 countries as well as jointly by NATO, and has played a key role in NATO operations like Libya, Afghanistan, and the fight against ISIS. This airborne C2BM platform is equipped with Link 11 and Link 16, two near real-time data-sharing network systems.

The AWACS is a modified Boeing 707, with long-range radar and sensors that enable it to “see” the battlespace and transmit data to commanders and warfighters in near real time. It is marked by its signature rotating radar dome, 30 feet in diameter, which houses a Northrop Grumman-made AN/APY-1/2 radar. Since Japan ordered its E-3s after Boeing had ceased production of the 707 airframe, the E-3 mission systems have been adapted for the Boeing E-767 for the Japan Air Self Defense Forces.

NATO’s E-3 fleet is due to be phased out by 2035. Also, Pacific Air Forces (PACAF) commander Gen. Kenneth Wilsbach has called for the Air Force to procure the E-7 Wedgetail and replace the AWACS.

Aside from its tactical defense role of providing battlespace knowledge to commanders by tracking low-flying hostile aircraft, the E-3’s original role was to replace the EC-121 as a strategic early-warning system. The AWACS has seen extensive use in combat, in engagements such as Afghanistan, Iraq, and the Balkans.

January 1973: The USAF gives Boeing approval to proceed with full-scale production of the AWACS.

March 1977: The first AWACS is delivered to the 552nd Airborne Warning and Control Wing at Tinker AFB, Oklahoma.

April 1981: In a deal announced by then-President Ronald Reagan, Saudi Arabia becomes the first foreign nation to purchase the AWACS.

1990-1991: The E-3 sees significant combat use in Operation Desert Storm, where over 800 AWACS sorties were flown.

November 1997: Boeing is awarded a contract to upgrade mission systems on the USAF’s E-3 fleet.

A Quarter Century of AWACS