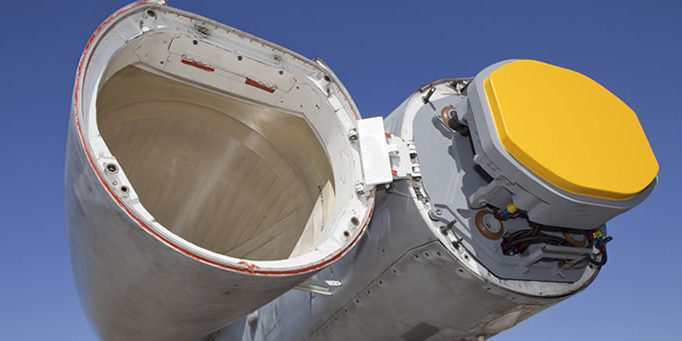 The AN/APG-79 active electronically scanned array (AESA) radar is an airborne radar made for F/A-18 E/F aircrafts.[i] It is comprised of numerous solid-state transmit and receive modules to practically eliminate the possibility of mechanical breakdown. With a range of 150 km, the AN/APG-79 provides instantaneous track updates and multi-target tracking capabilities. Its X-band radar allows for higher resolution imaging, helping with target identification and discrimination. The AN/APG-79 is the replacement radar for the AN/APG-73.[ii]

The AN/APG-79 is strategically valuable because of its active electronic beam scanning. This feature allows the radar beam to be steered at nearly the speed of light, optimizing situational awareness and providing superior air-to-air and air-to-surface capabilities.[iii] In turn, the agile beam enables the multimode radar to interleave in near-real time allowing the pilot and crew to use both modes simultaneously. Also, unlike previous radars in this family, the AN/APG-79 has internal monitoring diagnosis that can be interpreted in the field and on the front lines, lowing costs and improving readiness during wartime.[iv]

November 2016: Raytheon was awarded a $9.6 million Navy contract to provide engineering technical services and field services for the AN/APG-79.

January 2007: The radar had been installed in 28 aircraft.

2001: Contract awarded to Raytheon to begin fielding of the AN/APG-79 as a replacement for the AN/APG-73.