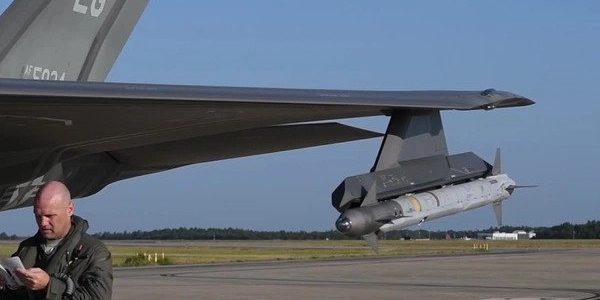 The Advanced Medium Range Air-to-Air Missile (AMRAAM) is a combat-proven air dominance weapon with more than 30 years of design, upgrades, testing, and production. Today, the AMRAAM continues to meet warfighting requirements beyond visual range. In total, the AMRAAM has been demonstrated in over 4,900 test shots and over 13 air-to-air combat victories; for this reason, 40 countries have purchased AMRAAM missiles.

The AMRAAM is a lightweight, cost-effective missile that uses a combination of inertial guidance, midcourse updates, and an onboard active radar to find the intended target and complete the intercept. The AMRAAM is a dual-role missile, offering operational flexibility in air-to-air and surface-launch engagements. In the air-to-air role, the weapon’s advanced active guidance section and mature seeker design allow it to quickly find targets in the most challenging environments. In the surface-launch role, it is the baseline weapon on NASAMS, allowing countries to use the same missile in either role with no modifications.

The AIM-120 AMRAAM was first entered into service in 1991. As the most popular beyond-visual-range missile, the AIM-120 has been produced by the U.S. Air Force, the U.S. Navy, and 33 other international customers. It has also had 16 confirmed air-to-air kills in the conflicts in Iraq, Bosnia, Kosovo, India, and Syria. The AIM-120 is a longer-range missile that possesses the duel-use feature requiring no modification on the missile from aircraft to land battery. It can be launched from an array of aircraft and land-based weaponry: F/A-18E/F Super Hornet, Hawk 200, Typhoon, F-16 Fighting Falcon, FA-50 Golden Eagle, F-22 Raptor, F-35 Lightning II, AV-8B+ Harrier II, F-4 Phantom II, F-15 Eagle, F-15E Strike Eagle, F/A-18 Hornet, F-5 S/T, Tornado ADV, Sea Harrier FA2, JAS 39 Gripen, JA37 Viggen, and National Advanced Surface to Air Missile System (NASAMS).

Improving on the AIM-9 Sidewinder—which entered into service in 1956—the AIM-9X Sidewinder first entered service in 2003. A U.S. Navy-led joint program with the U.S. Air Force, the AIM-9X also has 28 Foreign Military Sales partners. AIM-9X was selected as the Enduring Indirect Fires Protection Capability (IFPC) effector: “AIM-9X features the most advanced IR seeker in use today, providing warfighters a highly effective solution to track and intercept hard to detect, fast-moving cruise missiles.” Additionally, the US Air Force shot surface launched AIM-9X during the September 2020 ABMS Demo. Procured via all three services (US Air Force, US Navy, US Army), AIM-9X serves in the surface-to-air, air-to-air, and air-to-surface domains. The AIM-9X can be installed in a wide range of modern weaponry, including the F-15C Eagle, F-15E Strike Eagle, F-16 Fighting Falcon, F/A-18 Super Hornet, E/A-18G Growler, F-22 Raptor, all F-35 Joint Strike Fighter variants, and the National Advanced Surface-to-Air Missile System (NASAMS).

One of the new developments in the AMRAAM family of missiles is the AMRAAM Extended Range (ER). It is designed specifically for a new, ground-launched solution to can intercept targets at longer distances and higher altitudes. It features a larger rocket motor and enhanced flight control algorithms. The interceptor is being designed for integration with the NASAMS launcher to broaden the effectiveness of medium-range air defense systems. The first AMRAAM-ER test fights were completed successfully in 2021, and production deliveries are expected to start in 2022.