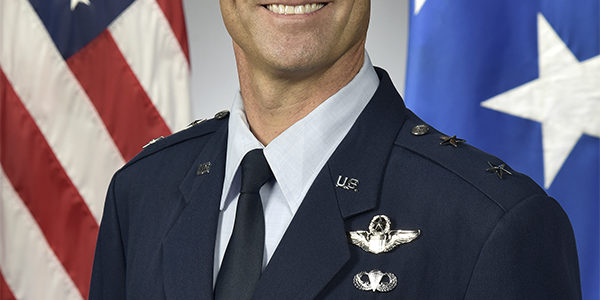 Maj. Gen. Kevin A. Huyck is Director of Operations for headquarters, U.S. Northern Command, Peterson Air Force Base, Colorado. He is the principal advisor to the USNORTHCOM Commander on all matters of homeland defense, including providing strategic guidance to plan and execute missions within the area of responsibility; including land, maritime, and air operations, defense support to civil authorities, and theater security cooperation, to include the Arctic.

Maj. Gen. Huyck is a 1990 graduate of the U.S. Air Force Academy and earned his wings at Sheppard Air Force Base, Texas. He was a distinguished graduate and instructor at the U.S. Air Force’s Weapons Instructor Course and attended National War College. His assignments include F-22 Initial Cadre, F-22 Follow-on Operational Test and Evaluation Director of Operations, combat Joint Staff and Deputy Chief of Staff for Operations at NATO’s Allied Air Command. He has commanded at the squadron, group, and wing level.

Prior to his current assignment, Maj. Gen. Huyck served as the Director of Operations, Headquarters Air Combat Command, Joint Base Langley-Eustis, Virginia. He was responsible to the Commander, ACC, on all matters pertaining to the direct operational planning, training, command, and controlling functions to deploy and employ regular and Reserve component combat air forces, including more than 1,900 aircraft, in support of U.S. security objectives.

Maj. Gen. Huyck is a command pilot with more than 3,000 flying hours in the F-15 and F-22, and 295 combat hours in support of Operation Southern Watch.