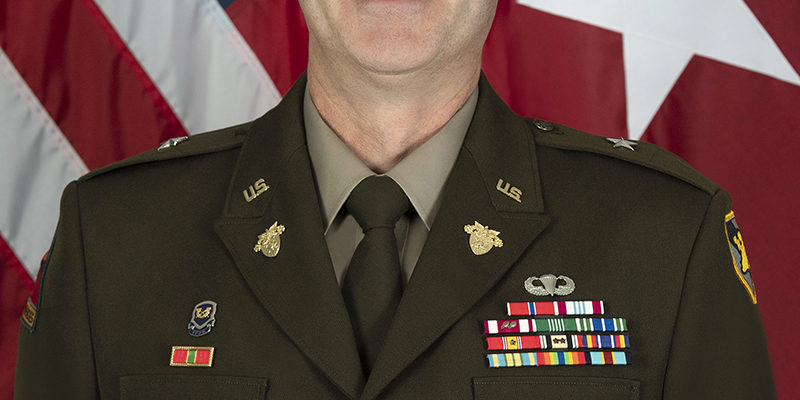 Brigadier General Shane Reeves serves as the 15th Dean of the Academic Board. He holds a Master of Laws in Military Law from the Judge Advocate General’s Legal Center and School, a Juris Doctor degree from the College of William and Mary, and a Bachelor of Science from the United States Military Academy. He is admitted to practice law before the Virginia State Bar, the United States Court of Appeals for the Armed Forces, and the United States Supreme Court.

Brigadier General Reeves was commissioned in 1996 from the United States Military Academy and served seven years as an Armor Officer in the 11th Armored Cavalry Regiment at Ft. Irwin, California. After attending law school in 2003, he transitioned into the Judge Advocate General’s Corps. As a Judge Advocate, he served in several legal positions, including as the Chief of Legal Assistance for Ft. Riley, Kansas; Brigade Judge Advocate in the 1st Armored Division in Taji, Iraq; Senior Trial Counsel for the 1st Infantry Division at Ft. Riley, Kansas; Professor of International and Operational Law at the Judge Advocate General’s Legal Center and School in Charlottesville, Virginia; and as the Deputy Staff Judge Advocate of Joint Special Operations Command at Ft. Bragg, North Carolina.

Brigadier General Reeves taught for ten years in United States Military Academy’s Law Department, most recently serving as the Head. He has taught and spoken on International Law and the Law of Armed Conflict. His recent speaking engagements include presenting at the 9th Quadrennial Federal Judges Association in Washington D.C., lecturing at Columbia Law School and the University of California-Berkeley Law School, and speaking in Tel Aviv and Jerusalem, Israel as part of the Academic Exchange Program. He is also a founding member and Director of the Lieber Institute for Law and Land Warfare located at West Point.

Brigadier General Reeves has written on the Law of Armed Conflict and national security issues. His articles have appeared in various publications, including Foreign Policy, Lawfare, Just Security, and Articles of War. He has written over 30 articles and book chapters in academic publications, including the Harvard International Review, the Harvard National Security Journal, Texas Law Review, Marquette Law Review, Cardozo Law Review, University of Pennsylvania Journal of International Law, and Berkeley Journal of International Law. Additionally, he served as the Co-Editor-in-Chief of the blog Articles of War, the editor and contributing author to U.S. Military Operations: Law, Policy, and Practice, and Managing Editor of the Lieber Studies Series published by Oxford University Press.

Brigadier General Reeves is married to Kimberly Reeves. They have called West Point their home for over ten years, where they have raised their three children, Charlie, Samantha, and Beth.