Thirty-seven years ago tonight, l was a graduating senior at the University of Southern California taking a class under Dr. William Van Cleave, with Dr. Rob Soofer as the Graduate Assistant, gaining a graduate certificate in Defense and Strategic Studies. Dr. William Van Cleave, who was Governor Ronald Reagan’s National Security Advisor during the 1980 Presidential Campaign, during the past year had introduced me to Dr. Edward Teller, one of President Ronald Reagan’s chief scientists on the White House Science Counsel. President Ronald Reagan’s Strategic Defense Initiative (SDI) speech of vision, magnitude, and leadership to change the world with ways to defeat the greatest threat to mankind was monumental in shifting paradigms and destinies. The speech had no solutions given or suggested, it was a call to action to break the norm of reliance on mutually assured destruction (MAD) with the confidence and belief in Americans to find the solutions. As successive President’s prior – President Richard Nixon, President Gerald Ford, and President Jimmy Carter did not believe in missile defenses and did not believe technologies could be developed to defeat nuclear ballistic missiles. President Reagan brought credibility and made it honorable to work on missile defense thus bringing some of the best and brightest with this vision.

“I’m taking an important first step. I am directing a comprehensive and intensive effort to define a long-term research and development program to begin to achieve our ultimate goal of eliminating the threat posed by strategic nuclear missiles. This could pave the way for arms control measures to eliminate the weapons themselves. We seek neither military superiority nor political advantage. Our only purpose — one all people share — is to search for ways to reduce the danger of nuclear war.” – President Ronald Reagan on March 23, 1983

“Free people must voluntarily, through open debate and democratic means, meet the challenge that totalitarians pose by compulsion. It’s up to us, in our time, to choose and choose wisely between the hard but necessary task of preserving peace and freedom and the temptation to ignore our duty and blindly hope for the best while the enemies of freedom grow stronger day by day.” – President Ronald Reagan on March 23, 1983

“Yet, current technology has attained a level of sophistication where it’s reasonable for us to begin this effort. It will take years, probably decades of efforts on many fronts. There will be failures and setbacks, just as there will be successes and breakthroughs. And as we proceed, we must remain constant in preserving the nuclear deterrent and maintaining a solid capability for flexible response. But isn’t it worth every investment necessary to free the world from the threat of nuclear war? We know it is.” – President Ronald Reagan on March 23, 1983

The legacy of SDI brought to bear two great technical concepts that stand as the rudimentary pillars and physics of today’s deployed missile defense systems around the world: kinetic energy intercept and the use of space for missile sensors and intercepts. The legacy of SDI is marked in history as it was a major contributor to forcing the Soviet Union to breakup in 1989 as the Russians economically could not compete with the United States on missile defense.

One of the solutions proposed but never implemented, “Brilliant Pebbles” was presented to President Reagan by the White House Science Council five years later by Dr. Teller, Dr. Lowell Wood, and Dr. Greg Canavan. It put forth the concept of many thousands of small satellite interceptors with sensors in low earth orbit using kinetic energy intercept as not to carry extra weight of a warhead but have the accuracy to run into the incoming missile during the boost phase of threat missile’s assent into its apogee in space. The reason for the high numbers was the lack of range each satellite had with technology of that time and to have a significant number over the Soviet Union covered at all times. What followed the never deployed “Brilliant Pebbles” was a de-weaponized small satellite constellation that was called “Brilliant Eyes”. That too did not get implemented but ended up through many adaptations and bureaucracy as operational demonstrators called the Space Tracking and Surveillance System (STSS), which is two satellites that have been operating for the Missile Defense Agency (MDA) since September 2009. Today the Space Development Agency (SDA) overseeing MDA is asking Congress to fund, test, develop and deploy a small satellite constellation of missile discrimination sensors to track hypersonic glide vehicles (HGV) and ballistic missiles. It is called the Hypersonic and Ballistic Tracking Space Sensor (HBTSS) and requested $99.6 million for next year fiscal year 2021. 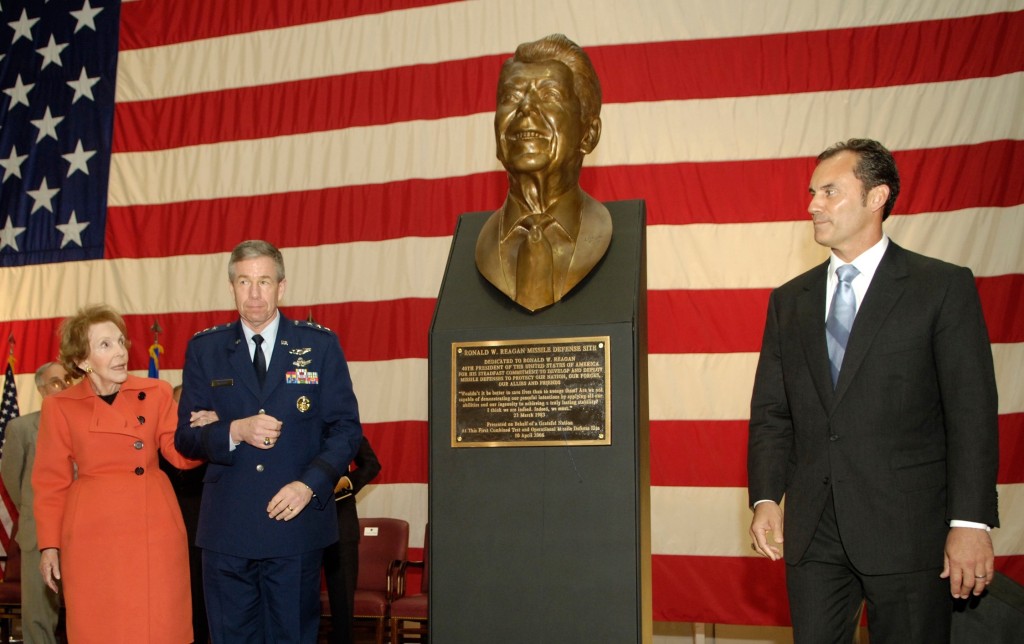 We have taken great honor to provide tribute to President Ronald Reagan‘s vision as we created with Mrs. Nancy Reagan the Ronald Reagan Missile Defense Site, that is a permanent memorial at Vandenburg Air Force Base in California overseeing the Pacific Ocean and four of the 44 current Ground Based Interceptors (GBIs) defending the United States of America.

Leadership, vision, courage and belief to negate and defeat the threat to the world was as admirable and doable 37 years ago, as it is today. It takes a first step! We recognize that first step.

“I’m taking an important first step. I am directing a comprehensive and intensive effort to define a long-term research and development program to begin to achieve our ultimate goal of eliminating the threat posed by strategic nuclear missiles. This could pave the way for arms control measures to eliminate the weapons themselves. We seek neither military superiority nor political advantage. Our only purpose — one all people share — is to search for ways to reduce the danger of nuclear war.” – President Ronald Reagan on March 23, 1983

Accelerate and Change, or Lose

Say Something that Says Something

A Marriage Made in Space