In the apogee of recent decades of the Missile Defense Agency’s budget of $11.5 billion for Fiscal Year 2018, 1.6% of the Department of Defense’s (DOD) $700 billion budget for the year, one crucial element of our national security has gone line item unfunded and unnoticed — hypersonic glide vehicle defense.

Hypersonic Glide Vehicles (HGV) can go to 20 times the speed of sound, maneuver in the atmosphere, use a ballistic or non-ballistic means of entry into the atmosphere, and can skip unpredictably across the upper atmosphere like throwing a stone across flat water. Though the Hypersonic Glide Vehicle can easily be seen bouncing off the atmosphere, it cannot be predicted where it will be to place an interceptor on it or near it for intercept, making it extremely challenging to defeat. Due to the extreme heat resistance shields for bouncing and reentry, HGVs also makes it challenging for future directed energy weapons. It is the offensive weapon platform of choice, both conventional and nuclear, and it is for the United States the prompt global strike solution once it is perfected and deployed.

The HGV offense has the distinct and clear advantage. Unlike HGV Defense there are line item investments in DOD budgets across the three major services – the U.S. Air Force (USAF), U.S. Navy, and the U.S. Army – on Hypersonic offense. President Trump has put in place Michael Griffin, Undersecretary of Defense for Research and Engineering, as the new Czar over the development of U.S. HGVs.

China’s HGV — the WU-14 — has undergone nine publicly known successful tests. Most recently, its HGV was mounted on a Dong-Feng 17 (DF-17) short range ballistic missile (SRBM) for two tests in November 2017. These tests utilized the same, elusive “skipping” scheme mentioned earlier. The U.S. Intelligence Community (IC) believes that the DF-17 has a range of 1,800 km to 2,000 km (approx. 1,118 mi to 1,243 mi). During the first test, on November 1, the DF-17 was launched from the Jiuquan Space Launcher Center in Inner Mongolia, and it flew for about 1,400 km (approx. 870 mi), landing almost exactly on its target in Xinjiang Province. The WU-14 was flying at an altitude of about 60 km (approx. 37 mi) once it separated from the ballistic missile and reentered the atmosphere. The WU-14’s development poses a direct threat to U.S. naval forces in the Pacific, which China has been very critical of. 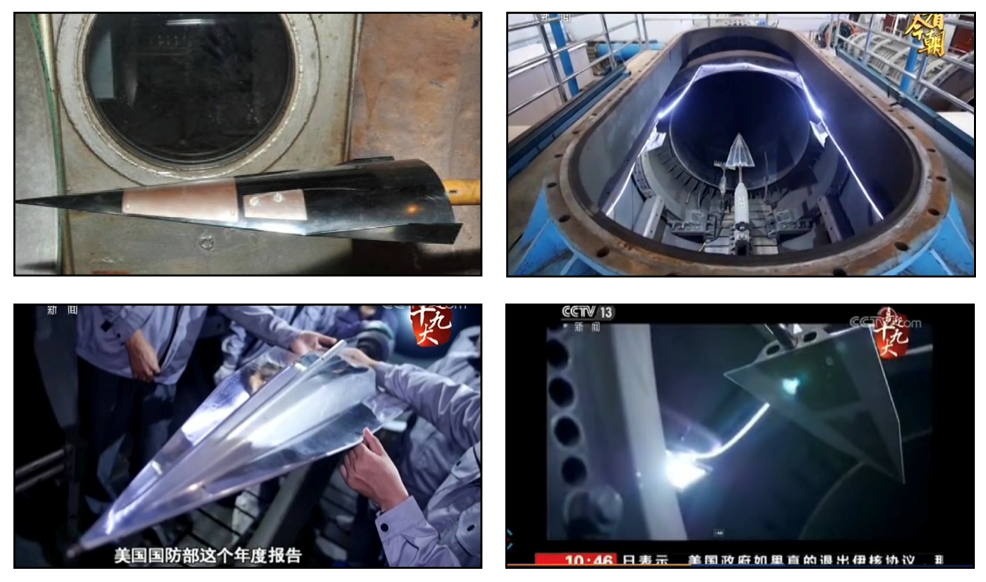 Russia’s hypersonic missile development is not as grand nor as successful as China’s to date but shows innovative technical merit in its development. In his State of the Nation address on March 1, 2018, Vladimir Putin remarked that his country was developing a slew of new nuclear delivery systems, including a hypersonic glide vehicle dubbed “Avangard,” also knows as the Yu-71 which is can be fitted onto intercontinental ballistic missiles (ICBMs). On March 12, 2018 Russia’s Deputy Minister of Defense Yuri Borisov commented that a contract has been signed for the production of the Avangard system. In October 2016, Russia successfully tested an RS-18 (NATO: SS-19 “Stiletto”) ICBM with a hypersonic glider called “Object 4202,” another name for the Yu-71. The Avangard is not the only HGV available to Russia. ​ Russia also has an HGV known as Yu-74 which can allegedly reach speeds up to 7,680 miles per hour. Russia reportedly tested its Yu-71 HGV on an RS-18 (NATO: SS-19) ICBM in April 2016, and then again in October 2016.

The U.S. is at a much smaller scale of investment, testing, and development in the field of hypersonics. The Defense Advanced Research Projects Agency (DARPA) has led this effort in proving our concepts. They developed the X-51A WaveRider hypersonic flight test demonstrator for the U.S. Air Force. The X-51A has undergone four powered flight tests, with the fourth and most recent one resulting in a success in 2013; the missile reached a speed of Mach 5.1 after being fired from a B-52 Stratofortress. In 2014, a hypersonic test weapon — known simply as the Advanced Hypersonic Weapon — launched from Kodiak Launch Complex in Alaska but exploded four seconds after launch.

Two other concepts in development under DARPA are the Hypersonic Air-breathing Weapon Concept (HAWC) and Tactical Boost Glide (TBG) weapon. On October 30, the U.S. Navy conducted a test of the Intermediate Range Conventional Prompt Strike Flight Experiment-1 (CPS FE-1) from the Pacific Missile Range Facility in Kauai, Hawaii. The test was used to gather information on hypersonic boost-glide capabilities which will be used by the Department of Defense for future hypersonic testing and development. Additionally, DARPA’s Hypersonic Test Vehicle 2 (HTV-2) has undergone two partially successful test flights. Both tests, in 2012 and 2011, reached a speed of Mach 20, but could not sustain it due to substantial damage caused by the high speed.

In the words of the U.S. Pacific Command (PACOM) Commander Adm. Harry Harris, “we’re falling behind.” Once the martial envy of the world, we are now falling behind in defense and deterrence, and a major contributor to this decline is the lack of funding afforded and policy to the development of capabilities to protect the homeland beyond the threat of North Korea.

DARPA’s pursuit of hypersonic weapons has garnered some funding hikes over the years, but hypersonic defense has largely been ignored. While ballistic missile defense remains paramount to the security of the United States and its allies, Russia and China are developing and testing ways to get around those defenses and render them obsolete. The inescapable truth of global security today is that Great Power competition is back, and the global power game is not just about ICBMs and ballistic missiles this time.

The Commander of U.S. Strategic Command, General John Hyten, has warned that the United States will need new missile defense technologies in order to stop hypersonic threats. In a March 2018 testimony before Congress, Hyten plainly admitted that “we don’t have any defense that could deny the employment of such a weapon against us, so our response would be our deterrent force, which would be the triad and the nuclear capabilities that we have to respond to such a threat.” Relying on the nuclear triad’s deterrence, however, has not prevented Russia and China from modernizing and expanding their nuclear arsenals. ​

We look forward to policy changes and investment to address the defeat of Hypersonic Glide Vehicles. HGV vulnerabilities that are extremely challenging to be defeated and would be driven by new advanced concepts developed by American ingenuity and our brightest people. Amongst these concepts are:

– disrupting the ionic atmosphere airflow of the HGV

– missile defeat capabilities during the short window of boost phase

– terminal point defense inside the atmosphere

Only one missile defense system deployed today has the range and within its capability to defeat ballistic missile reentry vehicles that fly in the range of the HGVs bouncing on the edge of the atmosphere, the Terminal High Altitude Area Defense (THAAD) system. THAAD has not been tested or developed for HGVs, but it is capable of striking ballistic trajectory targets just inside and/or just outside the atmosphere. THAAD-Extended Range (THAAD-ER) advancement of this system that would extend the system’s battlespace that could allow it the potential time and opportunity needed if predictability of HGV path is assured to have potential to defend against HGVs skipping across the upper atmosphere.

Certainly, with the Chinese focus on Anti-Access and Area Denial (A2/AD) in the Pacific and within the island chains in the South China Sea, having an operational electric rail gun on our aircraft carriers would look to be a necessity. An Electric Railgun type concept has been recently operationally deployed as a catapult for propelling 71,000 lb aircraft off of the USS Gerald R. Ford (CVN 78) Aircraft Carrier. The technical jump to propel a 6 lb smart projectile out of a 30-foot barrel, leaving at 4,500 MPH repeatedly, is not a leap it is a small step and close to reality today.

We need to be skipping ahead not skipped by to defeat the Hypersonic Glide Vehicle, assuring our strategic deterrence, global stability and national security.