In hyperbole, President Vladimir Putin of the Russian Federation claimed advanced ballistic missile, cruise missile, and hypersonic missile technology, along with underwater drone development, to defeat current U.S. missile defense systems. It is a misconstrued statement, endorsing the credibility of U.S. ballistic missile defense systems in an attempt to defeat them in other means that ignores current U.S. superiority and supremacy in space, air, underwater, electronic warfare, and cyber domains and oblivious to future American technology breakthrough developments, directed energy among many that would bankrupt the heavy investment of Russian development. It’s a race they should not start, a race they cannot afford, and a race they cannot win. It’s a plea vailed in Cold War propaganda to bring World pressure and American focus to Russia, while ignoring the overt and covert Russian aggression upon Ukraine, the Baltics, Eastern Europe, and NATO Europe.

“Nonetheless, it is concerning the direction that is going on in Russia. Certainly, the direction of the country, and the numbers of us over the years that have worked over the years to find ways to build a closer relationship between the United states and Russia. But as I think as our national security strategy and national defense strategy have said, we are in an era of great power competition again, and Russia has clearly chosen that as an approach. The number of capabilities that President Putin has talked about in an openness about them being orientated at the U.S. and its allies is very noteworthy. That intention and that focus is not merely articulated in that speech. Some of the large scale Russian exercises that have been conducted that identify NATO and the U.S. as that which is being exercised against is certainly another indicator of concern.” – Undersecretary of Policy Department of Defense John Rood – March 1, 2018

To counter the aggression of the Soviet Union towards Europe, the North Atlantic Treaty Organization (NATO) was formed almost 80 years ago on April 4th, 1949. Since its inception NATO has grown to 29 countries and all but Canada and the United States, are from Europe. Today, only eight (United States, Greece, United Kingdom, Estonia, Poland, Latvia, Lithuania, and Romania) of them live up to the intent to spend 2% of their GDP on defense. In direct response to escalation of the Russian threat to NATO since 2014, when only three countries spent 2% of their GDP on defense and in 2016 when only five countries met that goal, there are now 8 countries. Today, of those eight countries, five (Estonia, Latvia, Lithuania, Poland, and Romania) of them feel directly threatened by Russia. It is NATO and upon NATO, that has to fulfill its obligation to its original charter to deter the Russian threat and stabilize continued peace in Europe. It will require participation to be effective and a strong coalition of the willing NATO nations to lead. 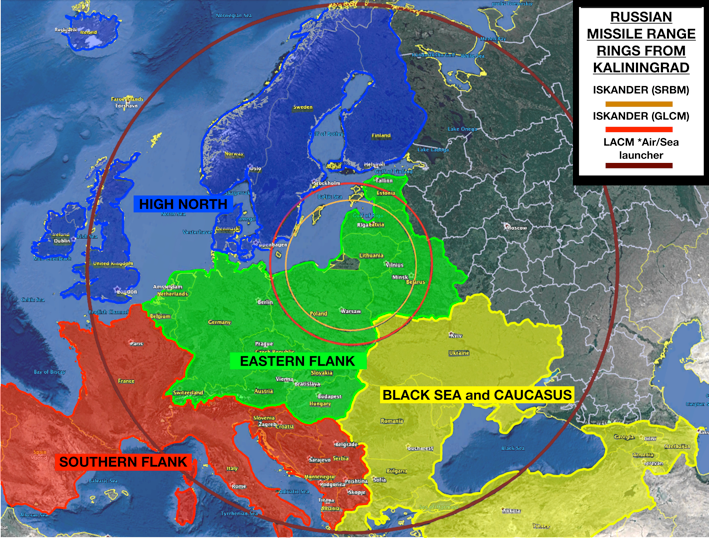 Russia has blatantly aggrieved the Intermediate-range Nuclear Forces (INF) treaty, with breaches of intermediate-range missiles upon Europe. Russia has created an area and access denial area of airspace in Kaliningrad, that extends over 36 European nations. Russian aggression towards the Baltics has forced a NATO Very High Readiness Joint Task Force (VJTF) and an Enhanced Forward Presence NATO force in each of the Baltic States and Poland. These NATO Forces to have the deterring value of these investments of strategic statements require integrated ballistic, air and missile defense systems against the current Russian missile capabilities and the future ones that President Putin announced.

Nobody likes a Bully, whether it’s in Russia or in North Korea. You have to stand up to Bullies and we must stand together firmly from NATO, Korea, and Japan and not waiver to veiled threats, have systems to negate the capabilities they threaten with, and be committed to peace through strength.