As a result of the 6th ballistic missile flyover of Japanese territory by an undeterred North Korea this past weekend, the Prime Minster of Japan, Shinzo Abe, wrote an opinion piece for the New York Times – published today (Link) – compelling the world community and the United Nations to join together to enforce harder sanctions, acknowledge the blatant facts of what North Korea has done, and call on unnamed countries that continue to support North Korea’s efforts in nuclear and ballistic missile proliferation to change their ways and for all countries to strictly enforce sanctions. When speaking about U.N. Resolutions, Abe stated, “They are an important step, but the leadership in Pyongyang has consistently ignored previous resolutions. The international community must stay united and enforce the sanctions.”

Secretary of Defense, Jim Mattis, stated the North Korean missile launch “put millions of Japanese into duck and cover,” before the missile landed in the Pacific. More capacity of upper tier and higher altitude missile defense interceptors such as Aegis Standard Missile-3 (SM-3) IBs, THAAD, Patriot Missile Segment Enhancement (MSE), and the upcoming SM-3 Block IIAs can exponentially help protect the millions of Japanese that have to duck and cover from missile debris, missiles that fail during flight, or that actually target Japan, making the population safer than it is today, as North Korea will continue to increase its ballistic missile flights over Japan.

Development of an early assent missile defense capability for the Aegis Ballistic Missile Defense (BMD) ships was attempted, using faster interceptors like as the proposed and promised SM-3 Block IIB  for the European Phased Adaptive Approach (EPAA) phase four that was to intercept Intercontinental Ballistic Missiles (ICBMs) from Aegis Ashore sites in Poland and Romania to defend the United States of America with a first shot opportunity, but was ultimately canceled by the previous administration in 2013 (Link). From Aegis BMD ships positioned correctly in the Sea of Japan, this much larger interceptor would have been capable of chasing down and intercepting a North Korean missile in the early assent phase. Today there remains inherent capability in the Aegis BMD system for ascent phase intercept, but it has been deemed operationally unfeasible with the speed of the current SM-3 interceptors and the required positioning of the ship in North Korean waters. The Aegis BMD ships are much more valuable defending Japan with their terminal phase defense capabilities and providing key sensor discrimination of the North Korean ballistic missiles targeting the United States of America. 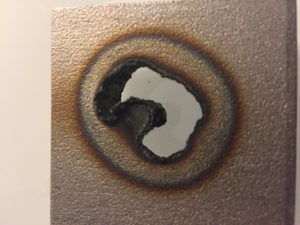 A hole burned into a half inch piece of steel from a 30-kilowatt laser.

The development of boost phase and early assent missile defense is essential to providing the most efficient means to negate ballistic missiles before the payloads are released. Today, the United States has directed energy solid-state (non-chemical) lasers that can burn through a half inch of steel six miles away in under two seconds with a low yield 30-kilowatt laser. There are solid state lasers today being developed, but not yet programs of record for the Department of Defense, that have 150-kilowatt solid-state power and weigh under 5,000lbs that can be put on reapers and Unmanned Aerial Vehicles (UAVs) that can stand off in international waters and burn through any North Korean ballistic missile material during its boost phase in under a second. This capability is a technology game changer and this technology needs to be developed, tested, and made into programs of record for the United States Department of Defense. Having an unmanned capability that can loiter in international airspace with the capability to intercept in the boost phase at speed of light is where North Korea is driving the United States and Japan to go in order to defend their people the best that they can.