President Trump has clearly called out China to fix the North Korean problem (Link to article from the Financial Times-subscription required) of which MDAA stated China was the solution on February 13, 2017 and thereafter (Link to MDAA alert titled North Korea: Clear, Real, and Dangerous) which is the correct and only true path to resolve the North Korean nuclear ballistic missile proliferation.

“China has great influence over North Korea. And China will either decide to help us with North Korea, or they won’t…If they do, that will be very good for China, and if they don’t, it won’t be good for anyone.” – President Trump, March 30, 2017

As has North Korea galvanized the United States to team up with regional nations to solve the issue and protect the populations from the threat, Iran’s continued growing ballistic missile threat has also galvanized the United States with Israel, the GCC (Gulf Cooperation Council) and in disproportion with Europe (link to MDAA Alert titled Disproportionate) in teaming up to defend their populations against Iranian ballistic missiles and their development of complex air breathing threats with the caveat of a future possible breakout of nuclear capability.

In that later team effort, the newest missile defense system was called out to the world this week in Israel as the David’s Sling reached initial operational capability (IOC) announced on April 2, 2017 at an official ceremony involving Israeli Prime Minister Benjamin Netanyahu. A joint venture between the United States and Israel-in which the United States has invested over $400 million with Israel over the past ten years -to produce a vertical launched atmospheric highly maneuverable high speed hit-to-kill interceptor that can destroy with reliability and confidence incoming rockets, ballistic missiles, maneuvering cruise missiles and air-breathing threats. This unique interceptor and its land-based system adds a seamless second layer of defense to the upper edge of the defensive rocket and mortar defensive layer provided by the Iron Dome and to the lower edge of the deployed operational Israel Arrow 2 fragmentation interceptors and system. The David’s Sling is now in full operation and deployed today in Israel covering a tremendous area that has not been covered in defending Israel’s population of over eight million from current and future sophisticated and complex threats from Iran, Syria, Hezbollah, and Hamas.

The signature mark is unique kill vehicle of the David’s Sling which is shaped like a dolphin to handle high maneuverability with abundant mach speed. The David’s Sling interceptor system operates off the same radar as Iron Dome, making the system integrated with the lower layer of Iron Dome rocket defense protection. Israel will look to have at least six David Sling units/batteries with a possibility of nine total units/batteries in operation for Israel. 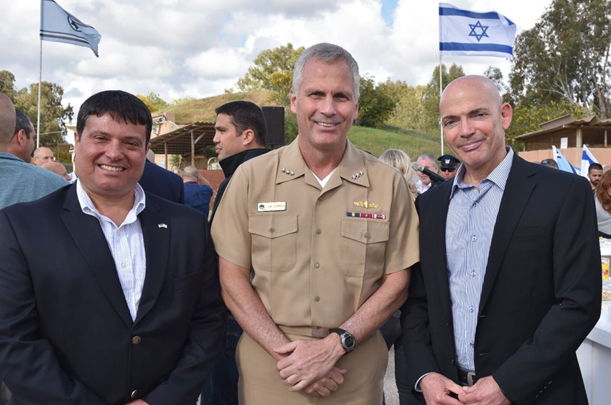 It is a tribute and of great historic merit to the Missile Defense Agency (MDA) and Israel Missile Defense Organization (IMDO) teams in putting forward this investment of engineering and teamwork to produce an outstanding interceptor and its culminating IOC to defend Israel and that could be used and considered in other places of the world for its unique capability and affordability.

Below is a statement from the Israel Missile Defense Organization:

“Yesterday, the Israel Missile Defense Organization (IMDO) under the Directorate of Defense Research and Development (DDR&D) at the Ministry of Defense, together with the American Missile Defense Agency (MDA), celebrated the delivery of the operational David’s Sling missile defense system to the Israeli Air Force. After over ten years of joint U.S.-Israeli development, David’s Sling is one of the most advanced missile defense systems in the world. Its operational capabilities complete Israel’s multi-layered defense array, which also includes Iron Dome, Arrow-2 and Arrow-3.”