“As President Trump has made clear, it is no longer sustainable for the U.S. to maintain a disproportionate share of NATO’s defense expenditures,” Secretay of State Rex Tillerson told the foreign ministers last Friday in Brussels. “Allies must increase defense spending.” Secretary of State Rex Tilerson has given all 28 NATO nations until May at the NATO Summit to come up with a plan for budget increases in defense. (Link to article from the Washington Post) 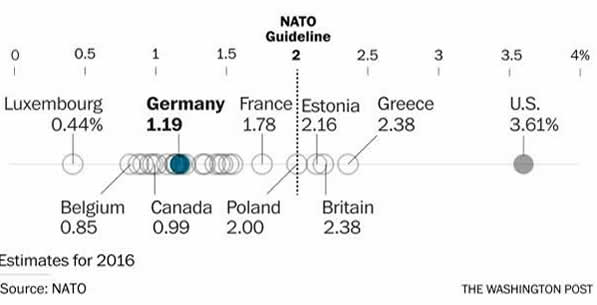 Emerging with even greater disproportionate investment, development, deployment and manning is the integrated cross domain/services of air and missile defenses in NATO Europe against cruise missiles, UAVs, drones and UAS (Unmanned Aerial Systems) threats to NATO Europe from Eastern Europe, the Middle East and Northern Africa. There is lack of consensus in NATO policy, integration, interoperability and investment of NATO European nations in addressing this real and proliferating threat to NATO Europe. Not only is this city and major urban areas point defenses, it is the lack and tremendous gap of air defenses for the maneuvering deterrent NATO offensive forces and their logistical support bases of ports and air bases.

The United States has 30,000 soldiers in NATO-Europe and thousands more of U.S. airmen and sailors. There are three United States Combat Brigade Teams deployed to NATO Europe facing the challenge of providing integrated air and missile defense for those deterrent forces that helps to preserve peace and stability for NATO Europe. It is unthinkable and unwinnable because the deterrent is not effective without providing air and missile defenses of this deterrent. NATO’s equivalent of its deterrent forces from its collective Air Force, Navy and Army have the same challenge of an unprotected force and a gap of capability that has to be addressed by the collective will of NATO nations to assure that they have credible deterrence.

NATO European nations need to show up, step up, lead and share the burden of resourcing on capabilities that defend its population, its territories, its major cities and its deterrent to keep Europe stable and safe against the emerging threats that border NATO. Europe has a tremendous lot to offer in technologies, manpower, investment, development that can be integrated and deployed in Europe.

NATO Europe lives in a different time then it has ever experienced with growing complex air and missile threats to Europe. No longer can NATO separate ballistic missile defense from integrated air and missile defense, or have a policy for one and not for the other. They are combined, they are integrated, they cross the NATO domains of Air Force, Navy and Army. For efficiency, for effectiveness, for investment, NATO has to change its course, increase its contributions to its defense and adapt collectively to the threats, or it will become irrelevant.

It’s a team game, there has to be contribution and sacrifice by each of the members of the team to win as a team.