During its first 75 days, President Biden’s administration has been probed, challenged, tested, and deceived with malign intent at unpredictable frequencies. The risks of strategic surprise are high, and the margins for strategic error are thin.

The global threats posed by China, Russia, North Korea, Iran, and their non-state proxies have grown, especially through missile proliferation. These actors seek to erode, change, bend, and break the established international rules and norms of behavior. They threaten the sovereignty and confidence of free nations.

This is what they have been doing over the past 40 days, in follow on to the first 35 days of the Biden presidency. 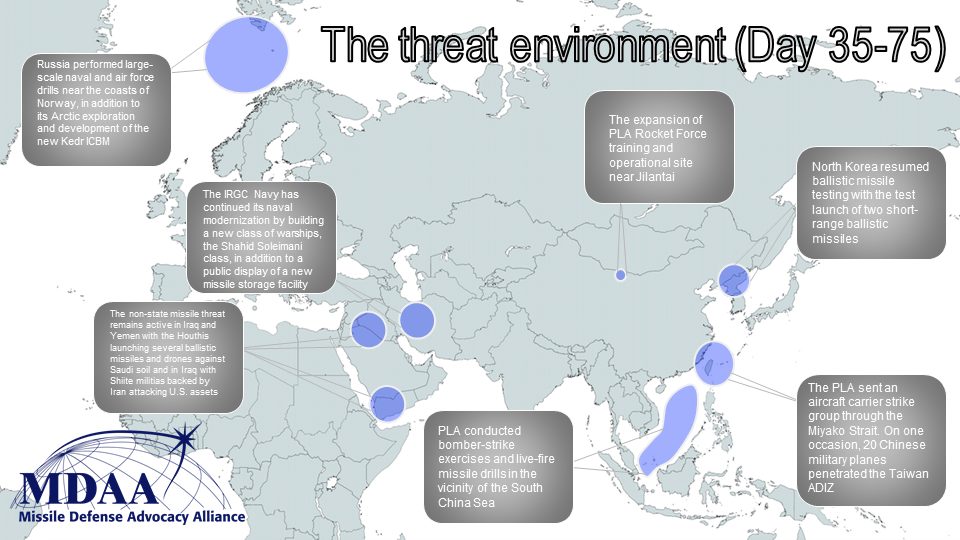 The PRC continues its frequent and intense effort to coerce Taiwan and other Pacific countries into submission, with deliberate violations of Taiwan’s air defense identification zone (ADIZ) (January 29th, for example). During this period, a noteworthy instance of 20 Chinese military planes penetrating that ADIZ took place, setting a record for these kinds of malign incursions by the PLA Air Force (March 1st). Last weekend, the PLA provocatively sent an aircraft-carrier strike group through the Miyako Strait, a 250 km-wide waterway between Japan’s Okinawa Island and Miyako Island (April 4th). All of these activities involve platforms and vehicles that carry missile systems and capabilities on them capable of long-range and precision munitions. At the same time, a flotilla of some 220 Chinese fishing boats has moored near the disputed Whitsun Reef, leading the Philippines to deploy Navy and Coast Guard ships.

The expansion of a PLA Rocket Force training and operational site, near Jilantai, was also revealed during this period (February 24th). It involves the construction of at least 16 new missile silos. Chinese military exercises and drills have increased in depth and provocation; the PLA conducted bomber-strike exercises and live-fire missile drills in and in the vicinity of the South China Sea (February 26th and 28th, respectively). Regarding research, development, testing, and evaluation (RDT&E) of weapon systems, it was announced that the PLA is working on hypersonic-strike-vehicle swarming technology, with the goal of securing an overwhelming offensive capacity against U.S. and allied air & missile defense systems and capabilities (April 5th).

Russia is currently engaged in the escalation of the eastern Ukraine conflict, known as the Donbass War, with the recent breakdown of the July 2020 ceasefire and large deployments of troops and equipment to the border with Ukraine taking place just last week. The U.S. European Command and the Department of Defense are closely monitoring the Ukrainian situation along with the NATO allies and U.S. partners in the region.

At the start of March, Russia performed large-scale naval and air force drills near the coasts of Norway, to parallel a similar NATO exercise that was taking place simultaneously in the area (March 1st). In recent days, Russian air force fighters and bombers have encroached on NATO air space, forcing NATO allies to scramble fighter jets up to 10 times in a single incident, and have coincided with Russian littoral breakthroughs in the Arctic and new routes through the ice, using nuclear submarines. Additionally, two Russian Tu-142 maritime patrol aircraft entered the Alaskan ADIZ (March 29th).

Of note during this period is the Russian RDT&E in pursuit of newer strategic strike capabilities. A couple of announcements (April 3rd being the most recent one) have been made regarding the ‘Kedr’ new-generation, solid-fuel intercontinental ballistic missile (ICBM), which is now set to begin testing in 2023, ultimately aiming to phase out the older ‘Yars’ ICBM by 2030. Finally, it was announced that the Russian Naval Forces Pacific Fleet’s cruise-missile-capable vessels are set to be armed with the newer and more advanced ‘Kalibr’ cruise missile, some variants nuclear capable, that are tailored for both naval and long-range land strikes (March 10th). The fielding of ‘Kalibr’ to this fleet is set to begin this very year.

The Islamic Republic of Iran continues to develop its ballistic and cruise missile capabilities, and its proxies carried out combat launches on U.S. and allied forces in Iraq.

The Islamic Revolutionary Guard Corps Navy has continued its naval modernization by building a new class of warships, the Shahid Soleimani class, named after former IRGC Quds Force head Qasem Soleimani (March 29th). The warship will be low-observable by radar and will be equipped with air-defense missiles, and is a shift away from the IRGC’s traditional doctrine of emphasizing asymmetric warfare and using fleets of tiny speed-boats for swarm tactics. With a larger conventional naval force, Iran is capable of directly engaging in combat with other regional navies.

In Yemen, the Houthi militia, another Iranian-backed force, engaged in multiple missile and drone attacks on Saudi Arabian soil. Saudi Aramco oil refineries and facilities, in particular, have been targeted by Houthi fires on over half a dozen occasions in the last month alone; including on March 27, when the Saudis reportedly intercepted a ballistic missile over the city of Najran.

President Biden’s administration turned 75 days old on Sunday, April 4. The international missile-threat environment has escalated and evolved both strategically and regionally, as tensions have elevated on multiple fronts.

The threat from missiles remains a clear and present danger, and a significant weapon of our adversaries. Strategic readiness, speed, and agility for defense and deterrence is absolutely essential.

President Biden must strengthen and advance our missile defense and deterrence capabilities.