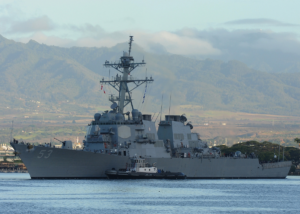 A U.S. Missile Defense Agency review of a failed ballistic missile intercept test showed that a mistaken input into the combat system by a sailor on the destroyer John Paul Jones caused the missile to self-destruct before reaching the target.

A tactical datalink controller, in charge of maintaining encrypted data exchanges between ships and aircraft, accidentally identified the incoming ballistic missile target as a friendly in the system, causing the SM-3 missile to self-destruct in flight, according to a source familiar with the test.

The head of MDA did not comment on the sailor error, but said in a statement that the ongoing review confirmed it wasn’t an issue with the SM-3 Block IIA missile or the Navy’s Aegis combat system.