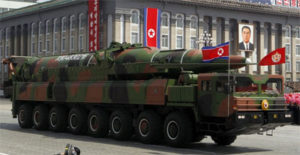 North Korea’s two failed missile tests earlier this month could have involved the KN-08 intercontinental ballistic missile capable of reaching the continental U.S., not the shorter-range Musudan missile identified by the U.S. and South Korean militaries, an American expert was quoted as saying.

Jeffrey Lewis, a nonproliferation expert and director of the East Asia Nonproliferation Program at the James Martin Center for Nonproliferation Studies (CNS), raised the possibility, citing satellite photos of the launch site, which was enhanced with a near infrared band of light.

The U.S. Strategic Command said that the two missile tests, which took place on Oct. 15 and Oct. 20, are presumed to have involved the Musudan intermediate-range ballistic missiles. South Korea’s military gave the same assessment. The two countries said the North’s missile exploded after take-off in both tests.

“We’re not fully persuaded that it was a Musudan,” Lewis told the Washington Post. “We still think people are being too quick to jump to the conclusion that this was a Musudan. Even if it’s only 50/50, being shocked half of the time is still bad.”

Lewis said that the satellite imagery shows burn scars left on the pavement and grass at the launch site in the North’s northwest after the missile tests, and the scars are much bigger than what had been seen after the previous Musudan tests.

He also said that one of the scars was “really big,” noting that it was possible that the explosion damaged the launch vehicle on which it was mounted. The second scar was smaller, suggesting that the missile flew some distance before whatever went wrong, he was quoted as saying.

The KN-08 missile has been considered a key concern for the U.S. due to its potential capability to reach the U.S.

Referring to the missile, U.S. Director of National Intelligence James Clapper said Tuesday that the communist nation is capable of launching “a missile that has a weapon on it that potentially could reach parts of the United States.”