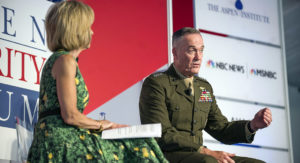 North Korea is the United States’ most immediate foreign concern, the chairman of the U.S. Joint Chiefs of Staff said over the weekend.

Speaking at the Aspen Security Forum, USMC Gen. Joe Dunford referred to Russia as the biggest threat facing America — a position he’s held for years — but said Pyongyang’s global security threat is the most immediate concern.

“Kim Jong Un’s regime is tied to nuclear program, and what I can tell the American people today is North Korea is capable of launching a limited missile attack,” he said. “The United States military can defend against a limited North Korea attack on Seoul, Japan, and the United States.”

Dunford stressed, though, that diplomatic and economic pressures are the best current way to approach the issue. He said the U.S. State Department is working to contain North Korea, and that further economic sanctions should cause the East Asian nation to curtail its nuclear and missile ambitions.