February 3, 2015 —Iran launched a small reconnaissance satellite into orbit on Monday at approximately 3:50am, a demonstration of 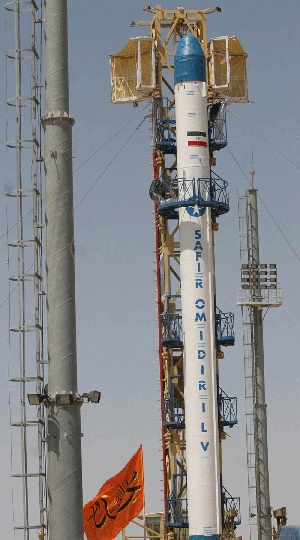 the country’s growing competency in rocket and missile technology. This is the fourth satellite Iran has launched since 2009. The satellite was carried by a 72-foot Safir rocket, the booster of which is based on the Iran Shahab-3 intermediate-ranged ballistic missile. According to Iranian news sources, both the rocket and satellite were “home-made.”

There has been long standing concern that Iran has used its space program as a cover for developing more advanced ballistic missiles. When asked to comment on the launch, U.S. State Department spokesperson Jen Psaki said that “Iran’s missile program continues to pose a dangerous threat to the region and is an issue we monitor closely. And our longstanding concerns regarding Iran’s missile development efforts are shared by the international community.”

Iran has forcefully refused U.S. attempts to include limitations on Iran’s missile developments in the ongoing negotiations on its nuclear program. Iran’s chief negotiator, Abbas Araqchi, said just today that “Iran’s missile program…is not up for any type of negotiations with any foreign side.”

The Safir rocket’s first successful space launch occurred in 2009. Since then, Iran has developed a larger space launch vehicle, the Simorgh, which is reportedly capable of carrying larger payloads than the Safir. In October 2014, Iran’s space program announced its intention to carry out three Simorgh launches starting late next month.