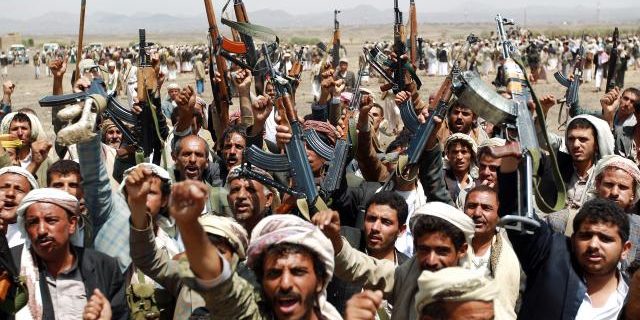 The Houthis – officially “Ansar Allah” – are a Yemeni rebel group adherent to Zaidism, a branch of Shia Islam shared by 30-40% of the Yemen population. Zaidi Imams ruled Yemen for one thousand years until the 1962 revolution.[1] The new Yemeni government excluded Zaidi regions from the economic and political development southern Yemen experienced.[2] In the past few years, the Houthis have stormed to power in north and west Yemen, pushing out government forces and prompting a war with the Saudi Arabian-led coalition.

Facing growing Wahhabi influence, endemic poverty, corruption and Saudi Arabian interference in the early 1990s, marginalized families in northern Yemen started voicing their opposition to such radical changes in the country’s political climate. Here, the al-Houthi family – for whom the movement is named – began a “Zaidi revival” in Saada, a major city in northern Yemen. Aided by Iran and the recently formed Hezbollah, the Houthi movement began to rapidly grow.[3]

Following the 2003 US invasion of Iraq, the al-Houthi followers began radicalizing, threatening  the government’s control. Tensions exploded in 2004, ultimately giving rise to the the militant arm of the Houthi movement. Led by Hussein al-Houthi, the militants clashed with government “Islah” forces led by President Ali Abdullah Saleh. Although Hussein was killed shortly after by government forces, his family led a continuous series of insurgencies against Saleh’s government for the next 6 years.[4]

Emboldened by the success of the Arab Spring in Tunisia and Egypt, Houthi rebels participated in widespread pro-democracy protests and rebellion against President Saleh in 2011. During this offensive they began taking control of both Yemeni military bases and their missile arsenals. In 2012 Saleh vacated the presidency, passing it to his Vice President Abd Rabbuh Mansur Hadi. The National Dialogue Conference (NDC), created to establish democracy after the 2011 revolution, promised representation for the Houthis. However, new Hadi/GCC-drafted policies essentially ignored this, instead gerrymandering the country to eliminate Houthi power.[5]

In 2014 Houthi forces allied with a returned Saleh and his supporters who splintered from the military, stormed through Yemen, and took control of the capital and much of the western and northern territories. They have established a rival government and pushed Hadi’s forces to refuge in the South, while Hadi himself fled to Saudi Arabia. In the face of blockades and strikes from the Saudi coalition, along with ISIS attacks that have killed over 2,200 children and pushed millions to starvation, the Houthi militancy has swelled to approximately 100,000 fighters. As of 2018 , the group has continued to stage missile strikes against Saudi coalition forces.[6]

The Houthi rebel campaign has been steadily increasing in strength and capability since 2014, when President Hadi and his regime formed a coalition with Saudi Arabia in direct opposition to the Houthi strongholds and their attempted government formation.

Missile and weapon capabilities of the Houthis can be directly traced to 1990, when the Yemeni government purchased arms from North Korea and the then-Soviet Union. Just prior to these sales, Yemen had been divided into a northern, Saudi-supported state and a southern, Soviet-supported, Communist regime. The National Liberation Front and Yemeni Socialist Party both maintained control over the South, purchasing Scud-B and -C missiles from the Soviets to use against the North Yemen Republic. [7][8]

After the unification of Yemen in 1990, the Yemeni government took possession of the Soviet Scud missiles from the South, along with the Soviet Tochka (SS-21 Scarab) missiles and the North Korean Hwasong 5 and 6, which are based on a scud design. In 2002, a North Korean trade ship was stopped on the Arabian Sea under the suspicion it contained 15 Hwasong missiles meant for the Yemeni army, later confirmed to be true by the Pentagon. [9] The ship was allowed to proceed with its route, and the missiles were securely delivered to the government.

Once the Yemeni government under Hadi started to target Houthi strongholds, previous Yemeni President Salah and his supporters allied forces with the rebel group. Salah’s followers included many past military members, who had access to the main government’s weapons arsenals and ballistic missile stores making it possible to seize many of the aforementioned missiles after pushing Hadi’s forces out of the capital, Sanaa.

Since 2014 Saudi Arabian authorities have reported over one hundred Houthi missile interceptions, with dozens more that were fired at the Yemen government and strategic Saudi checkpoints. [10] The Houthis are known to be in possession of the Scud-B and -C missiles, the North Korean Hwasong variants, the Tochka missile, the Qaher-1 missile, the Zelzal-3 ballistic missile and the C-802 anti-ship cruise missile. The first three missile types were most likely acquired from the Yemen government, but the U.S. and other Western countries are labeling Iran, Russia and Hezbollah as suppliers for the remainder of the systems in Houthi possession.

Although Iran has officially denied all allegations surrounding involvement with the Houthis, U.N. experts claimed to have identified ‘missile remnants, related military equipment and military unmanned aerial vehicles that are of Iranian origin’ within the rebel group’s arsenal [11]. There is evidence that the Iranian Revolutionary Guard uses Kuwaiti waters in the Persian Gulf to smuggle these weapons, yet Kuwait denies these allegations. [12]

The Qaher missile first debuted in 2015 and was a modified version of the S-75 surface to air missile. March 2017 saw the operational use of the Qaher-2 missile, with greater range and payload capabilities than the first of its kind. [13] Repurposing the S-75 to have a 350kg warhead instead of the original 195kg required extensive development, which many experts claim the Houthis are not capable of without foreign state support. Further suspicion arose after the Houthis debuted missiles called Burkan-1 and Burkan-2 in early 2018, almost an exact replica in range and shape as the Iranian Qiam-1 missile. It is possible that the Houthis developed the Burkan technology domestically using technology already possessed but given the improved guidance systems and stabilizing fins the Burkan has, it is unlikely that it was developed without Iran’s assistance. [14]

There is no direct connection between the Houthi forces and Russia post the 1990s civil war, but Russia has, on several occasions, come to Iran’s defense pending possible U.N. Security Council sanctions on Iran and its support of the Houthis. Besides the Scud-B and -C missiles from the 1990s, Houthi officials have stated their willingness to purchase Russian arms, but there have been no known recent transactions between the two parties.

Hezbollah is also thought to be supporting the Houthi rebels, despite denials from the Lebanese militancy. Saudi Brigadier General Ahmed Asseri, leader of the coalition forces, recently acknowledged the financial aid and training Hezbollah provides the Houthis, as well as a way of replenishing their missile arsenal. Hezbollah also possesses the Zelzal rocket technology from Iran, proof of their relationship. The Houthi rebels previously fired Zelzals into Saudi Arabia in 2017, this shared missile capability lends further credibility to the theory Iran is funding the Houthi resistance. All weapons transfers to the Houthis are done through smuggling and background networks, shrouding the Houthi support base in some shadow of mystery.

The Houthi rebels have rapidly gained momentum, averaging an attack or a missile strike nearly every week in 2018. This increase in action started in October 2016, when Houthi rebels launched numerous anti-ship cruise missiles at a catamaran vessel carrying wounded Yemeni and other passengers operating off the coast of Yemen. The attack ultimately pronounced an act of terrorism by the United Nations. Just a few days later a military ship from the United Arab Emirates, a coalition member-state, was attacked in its passage to the port of Mokha in the Red Sea by Houthi missiles. The vessel was severely damaged.

The conflict escalated further after an attempted Houthi attack on a U.S. Navy ship, the USS Mason. Intelligence sources confirmed after the attack that the missiles fired on the ship on October 9, 2016 were guided anti-ship C-802s, of Chinese descent.  Houthi possession of this missile system at the time was unknown, and with a warhead designed to penetrate hulls and disperse shrapnel the Houthis demonstrated a newfound ability to target and attempt to destroy naval ships. However, the USS Mason was an Arleigh-Burke guided missile destroyer and effectively defused the attack using Standard Missile-2 and Evolved Sea Sparrow missile interceptors. The Houthis continued attempting to attack the Mason for the remainder of October 2016 but were deterred each time. Despite this failure, the Houthis proved themselves to be a formidable force through their possession of such powerful missile systems.

After these attacks, the Houthis began to target Saudi Arabia more frequently. The target locations are often heavily populated areas or military bases, such as the Saudi Arabian capitol of Riyadh. The Houthis only began targeting the capital city in March of 2018, proof of their growing missile system capabilities. In conjunction with coalition air strikes, Saudi missile defense systems have proved rather effective at diminishing Houthi missile damage- the Saudi government has claimed that over 100 Houthi missiles have been successfully intercepted. Despite using their Patriot Pac-2 and -3 systems, however, Saudi Arabia has been unable to completely deter the onslaught of Houthi attacks in recent months. The series of strikes between the two parties has been labeled a proxy-war, with Iran backing the Houthis against its foe in the Middle East, Saudi Arabia. As of June 2018, there seems to be no end in sight to the conflict.