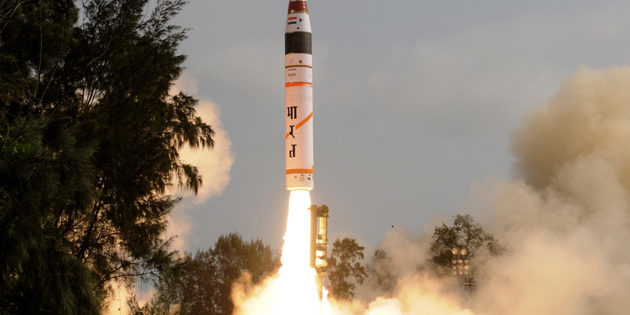 India is developing a solid-fueled three stage intermediate range ballistic missile (IRBM) known as the Agni-V. [1] The Agni-V is a three staged solid propellant missile with a range of over 5,000 km. [2] China though argues that the missile range could be up to 8,000 km. [3]   The weapon has a payload of 1.5 tons. [4]  However; the United States Air Force classifies the Agni-V as not yet deployed. [5] The first flight test of the Agni V was in April of 2012. [6] The Indian Defense research and Development Organization has claimed that the Agni-V will be outfitted with multiple independently-targeted re-entry-vehicles. That claim, however is viewed some suspicion due to the cost financially as well as potentially exacerbating the tension between India and China. [7]

The Agni-V missile using its 5,000 km range would be the first missile developed by the Indian military to reliably threaten Beijing. [8] Theoretically, this would be credible threat against China in the Indian government’s minimum deterrence policy. [9] However, the ability to strike China elicits a concerned reaction from the Chinese government. India and China have a history of conflict along their border. [10] While India has not achieved nuclear or conventional parity with China, India’s consistent pursuit of that parity causes some concern within the Chinese government according to China Central Television they do not believe that it “pose[s] a threat in reality”. [11]