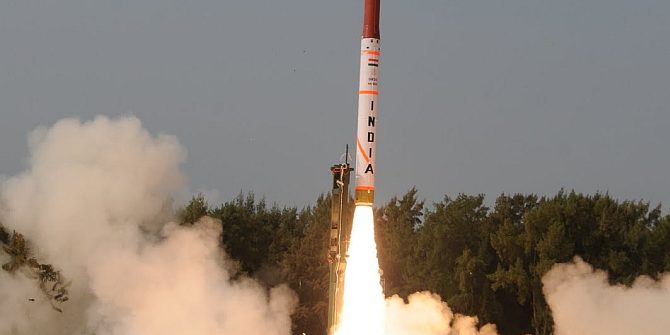 The Agni-I is the first model of the Agni missile family and is a road-mobile, surface to surface, single-stage ballistic missile. With a range of 700km, the Agni-I is a SRBM powered by both solid and liquid propellants that uses an inertial guidance system for an accuracy of 25m CEP.[1] The Agni-I is designed to be deployed from a TEL-vehicle on either road or rail-mobile platforms.[2] The first test of the Agni-1 occurred in 1994 however the missile was not deemed operational by military sources until 2004.[3] Longer-ranged variants of the Agni-I, such as the Agni-II, Agni-III, Agni-IV, and Agni-V, have been developed however they have not replaced the original model. The last Agni-I missile test occurred on November 22, 2016.[4]

After 1994, the Agni was no longer operationally deployed, but instead used for testing purposes. More specifically, the SRBM became  a technology demonstrator project to develop MIRV capabilities.[5] However, as the Agni-V succeeded in developing a MIRV-capable ballistic missile, the Agni-I has had to search for new purposes like testing the technical parameters of the Indian Army.[6] The 2016 test-launch, developed and conducted by the Defence Research and Development Organization, was meant to follow a pre-coordinated trajectory tracked by ground radars, telemetry stations, and by naval ships stationed near the target.[7] According to the DRDO, the missile successfully fulfilled its mission objectives. Variants of the Agni-1 pose a larger threat due to their increased range, payload, and MIRV capabilities, however the short to medium-range missile fills the gap between the Privthi and other Agni systems.[8]