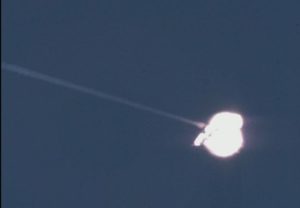 The missile – launched by the Houthi militias who control large parts of the country, including the capital Sanaa – was intercepted over the airspace of the frontier province of Najran.

Meanwhile, unknown sources informed the Saudi civil defense in Jazan, another southern province, that missiles were fired from Yemen territory, hitting a civilian’s home and injuring a child.

In recent days, clashes between Yemen’s Popular Resistance – backed by the Arab coalition – and the Iranian-backed Houthi militias have been continuing across several districts in Yemen amid UN-sponsored peace talks between Yemen’s warring sides taking place in Kuwait.

Three months of talks between the government and the Houthis militias have failed to make headway, forcing the host country to issue an ultimatum Wednesday for the warring parties to reach a deal within 15 days or leave.