The successful test comes amid ongoing tensions between the United States and Russia over Russia’s annexation of the Crimea region of Ukraine earlier this year.

The new capability tested Thursday is due to be installed on U.S. Navy Aegis destroyers, and will be part of the “Aegis Ashore” system that will become operational in Romania next year, providing parts of Europe a defense against potential ballistic missile attacks.

Riki Ellison, founder of the nonprofit Missile Defense Advocacy Alliance, said the test of the Baseline 9 upgrade for Aegis would boost the U.S. military’s ability to defend against multiple threats, and save money in the future.

“This long-awaited capability will exponentially increase our air and missile-defense capabilities, allowing Navy ships to defend themselves against incoming cruise missiles while simultaneously tracking and defeating ballistic missiles threatening other areas,” Ellison said.

He said it would eliminate the need for U.S. Aegis destroyers to have backup defenses or “shotgun” ships as protection while providing ballistic missile defense.

Raytheon said the test demonstrated the capability of its missile technology.

“These successful engagements demonstrated the extraordinary capabilities of Aegis BMD and Baseline 9 and the readiness of our sailors aboard the USS John Paul Jones, to continue to defend our nation in the air, on land and at sea,” he said. (Reporting by Andrea Shalal; Editing by Ken Wills) 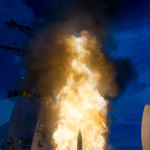