With a Great Defense Comes a Great Offense

December 7, 2017
Soldiers of Task Force Talon in front of a THAAD launcher (Left) and pilots in front of a B-1 Bomber (Right) at Anderson Air Force Base, Guam. December 6th, 2017

With a great defense comes a great offense that defines a great strategic deterrence, a deterrent that has shut down and shut out North Korea’s intent and nuclear ballistic missile capacity to strike the United States of America, the Republic of Korea, and Japan.

North Korea is testing their nuclear capability and ballistic missile capability for regime survival, international prestige, and strategic power projection that is bumping up to the fringes of the “red line,” but not crossing it, is the carefully orchestrated policy of North Korea. A North Korean policy that China supports and will come to the aid of North Korea if the United States pre-emptively strikes North Korea. A North Korean policy that China will not support, nor aid, is if North Korea pre-emotively strikes the United States, Japan, or South Korea. North Korea’s relentless drive for a strategic nuclear ballistic missile capability is its only method to force a settlement of a future Korean War and guarantee the status quo of armistice and regime succession.

The United States and the Republic of Korea are holding one of its biggest Air Force and air power exercises with over 150 sorties on and off the Demilitarized Zone (DMZ) border of North Korea this week. Paramount to that demonstration of complete air supremacy and direct lethal overwhelming Air Force power projection to the North Korean regime, are the United States B-1 Bombers that fly from Guam. A single B-1 Bomber can put precisely on target 24 Joint Direct Attack Munition (JDAM) 2,000 lb bombs from beyond standoff ranges, without being remotely close to the North Korean border or DMZ and any possible air defenses of North Korea. The B-1 Bomber is invincible to North Korea, flying alone and unafraid, the bomber is able to continually stay in the air at standoff ranges to target the North Korean Regime’s critical infrastructure and the Transportable Erector Launchers (TEL) of the North Korean Strategic Rocket Force. The B-1 Bomber which has never been shot down, is the number one close air support platform for the United States Air Force, dropping over 80% munitions in current and previous U.S. conflicts in the Middle East. The B-1 Bomber was designed in the 1970s and deployed in the 1980s to be a low flying nuclear bomb carrier against the Soviet Union, but it is now a non-nuclear bomb platform today, as designated by the Strategic Arms Limitation Talks (SALT) treaty with the Soviet Union.

A contingent of U.S. Air Force B-1s from the 37th Tiger Bomber Wing, out of Ellsworth Air Force Base, South Dakota, is co-located with the U.S. Army Echo 3, Terminal High Altitude Area Defense (THAAD) missile defense battery on Anderson Air Force Base, Guam. Though Guam is strategically located in the South Pacific within bomber striking distance of North Korea and far enough away to challenge North Korean ballistic missile power projection, North Korea has demonstrated the Musudan, Hwasong-12, Hwasong-14, and last week the Hwasong-15 that can threaten Guam and North Korea has directly threatened Guam in August. In resolve to defend the nearest United States territory and its citizens from North Korea, the United States under President Obama deployed THAAD to Guam in 2013, the most capable regional land-based ballistic missile defense system in the world today. After two years of Task Force Talon being a rotational deployment from Fort Bliss, Texas, the United States permanently placed Echo 3 THAAD Battery in Guam. Around 150 United States Soldiers operate and defend the THAAD Battery at Anderson Air Force Base, Guam.

Yesterday, MDAA along with the Lieutenant Governor of Guam, Ray Tenorio recognized and honored Task Force Talon at their site on Anderson Air Force Base, Guam and their best missile defenders operating the THAAD battery and National Guardsman from Hawaii National Guard defending the THAAD battery. In the audience of U.S. soldiers and in their support, were U.S. Air Force B-1 Bomber pilots from the 37th Tiger Bomber wing. Bringing together one team for one mission.

With a great defense comes a great offense that defines a great strategic deterrence. 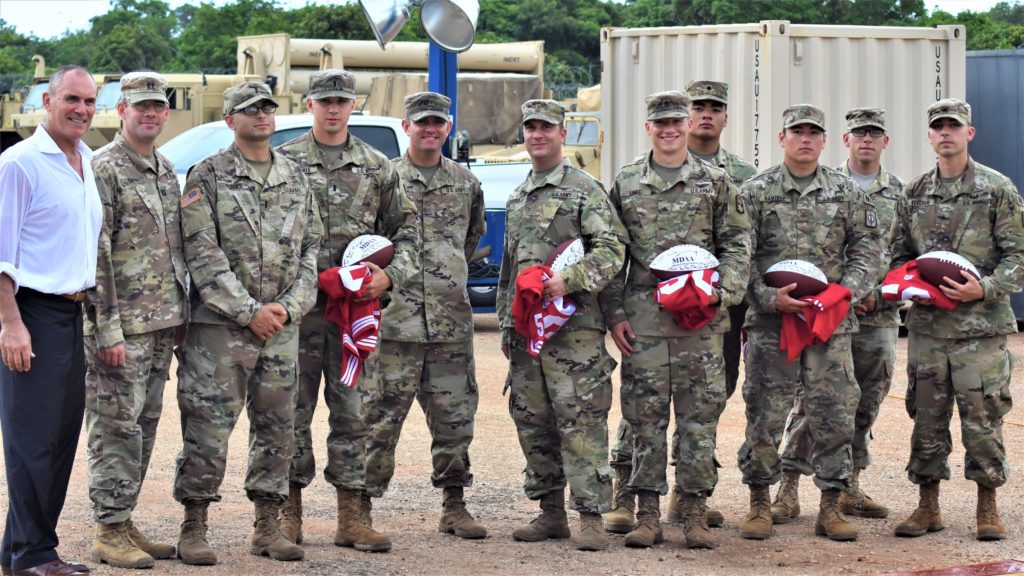 The eight best leaders of excellence recognized in the ballistic missile defense mission of Guam for 2017 at our third annual Guam Missile Defender of the Year Fiesta: