What Happened in Vegas, Does Not Stay in Vegas

In respect of the national Democratic Party and our organization’s commitment to bipartisanship in our advocacy of missile defense, which includes our creation with one of the great legacy Senators of our nation, Senator Daniel Inouye, of the Kauai Veteran’s Eternal Memorial and Missile Defense Viewing Site at the Pacific Missile Range Facility in Kauai Hawaii, we were invited to attend the Democratic Presidential Debate at the Wynn Hotel last night in Las Vegas, Nevada. It was an opportunity to hear the visions of the candidates, understand the Democratic platform, and see in person the character and chemistry of leadership for the Democratic Party of their eventual nominee and possibly the next President of the United States of America. We were honored to accept this invitation on behalf of our mission and purpose. 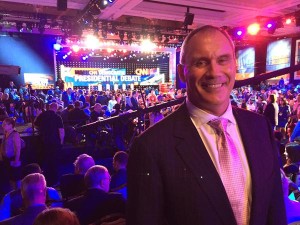 Although many important issues were highlighted, from immigration and increasing wages, to gun control, U.S. national security did have a few moments of the  candidates’ attention. The following are some key quotes on this topic from each of the candidates that took part in the main debate.

When asked what the most important national security threat facing the United States was, the candidates responded:

It’s certainly the chaos in the Middle East. There’s no doubt about it.

I believe that nuclear Iran remains the biggest threat, along with the threat of ISIL; climate change, of course, makes cascading threats even more (inaudible).

I think it has to be continued threat from the spread of nuclear weapons, nuclear material that can fall into the wrong hands. I know the terrorists are constantly seeking it, and that’s why we have to stay vigilant, but also united around the world to prevent that.

The scientific community is telling us that if we do not address the global crisis of climate change, transform our energy system away from fossil fuel to sustainable energy, the planet that we’re going to be leaving our kids and our grandchildren may well not be habitable. That is a major crisis.

Our greatest long-term strategic challenge is our relation with China. Our greatest day-to-day threat is cyber warfare against this country. Our greatest military-operational threat is resolving the situations in the Middle East.

Here are some other important highlights from the candidates view points on the emerging aggressive Russia that will certainly have to handled over the next four years in U.S. national security policy:

Well, first of all, we got a lot of business done with the Russians when Medvedev was the president, and not Putin. We got a nuclear arms deal, we got the Iranian sanctions, we got an ability to bring important material and equipment to our soldiers in Afghanistan. There’s no doubt that when Putin came back in and said he was going to be President, that did change the relationship. We have to stand up to his bullying, and specifically in Syria, it is important — and I applaud the administration because they are engaged in talks right now with the Russians to make it clear that they’ve got to be part of the solution to try to end that bloody conflict. And, to — provide safe zones so that people are not going to have to be flooding out of Syria at the rate they are. And, I think it’s important too that the United States make it very clear to Putin that it’s not acceptable for him to be in Syria creating more chaos, bombing people on behalf of Assad, and we can’t do that if we don’t take more of a leadership position, which is what I’m advocating.

Well, I think Mr. Putin is going to regret what he is doing. I think that when he gets into that… I think he’s already regretting what he did in Crimea and what he is doing in the Ukraine. I think he is really regretting the decline of his economy. And I think what he is trying to do now is save some face. But I think when Russians get killed in Syria and when he gets bogged down, I think the Russian people are going to give him a message that maybe they should come home, maybe they should start working with the United States to rectify the situation now.

Let’s start with why Russia is in Syria right now. There are three strategic failings that have allowed this to occur. The first was the invasion of Iraq, which destabilized ethnic elements in Iraq and empowered Iran. The second was the Arab Spring, which created huge vacuums in Libya and in Syria that allowed terrorist movements to move in there. And the third was the recent deal allowing Iran to move forward and eventually acquire a nuclear weapon, which sent bad signals, bad body language into the region about whether we are acquiescing in Iran becoming a stronger piece of the formula in that part of the world. Now, I say this as someone who spent five years in the Pentagon and who opposed the war in Iraq, whose son fought in Iraq, I’ve fought in Vietnam. But if you want a place where we need to be in terms of our national strategy, a focus, the greatest strategic threat that we have right now is resolving our relationship with China. And we need to do this because of their aggression in the region. We need to do it because of the way they treat their own people. I would say this to the unelected, authoritarian government of China: You do not own the South China Sea. You do not have the right to conduct cyber warfare against tens of millions of American citizens. And in a Webb administration, we will do something about that.

I believe that, as president, I would not be so quick to pull for a military tool. I believe that a no-fly zone in Syria, at this time, actually, Secretary, would be a mistake. You have to enforce no-fly zones, and I believe, especially with the Russian air force in the air, it could lead to an escalation because of an accident that we would deeply regret. I support President Obama. I think we have to play a long game, and I think, ultimately — you want to talk about blunders? I think Assad’s invasion of Syria will be seen as a blunder.

I just have to answer one thing that Senator Webb said about the Iran deal, because I’m a strong proponent of what President Obama — and he said that because of that the Iran deal that enabled Russia to come in. No, that’s not true, Senator Webb. I respect your foreign policy chops. But Russia is aligned with Iran and with Assad and the Alawite Shias in Syria. So that Iran deal did not allow Russia to come in.

In the circumstances described above by all of the Democratic presidential candidates, the strategic deployment of United States integrated air and missile defense systems will be used as an effective tool in their national security policy.