We Will Not Wait, The Risk is Too Great

16 years ago, the first ground based missile defense interceptor to defend the 50 states of America was lowered into a GBI silo in Fort Greely, Alaska. Four more of these Interceptors followed, with one of the four deployed in Vandenberg AFB, California. This was the first time in history that any nation could intercept an ICBM targeted on their entire country. This GMD system was created, designed, developed to defeat North Korean ICBMs and deployed to defend the U.S. Homeland under President George W. Bush’s directive announced December 16, 2002. On September 30, 2004, the GMD system became operational with 5 GBIs to defend all 50 states of the United States of America from a North Korean ICBM. In remarkable rapid acquisition to deployment, it took less than four years after the announcement by President George W. Bush for the entire Nation to have a missile defense system that remains a historical marker for stability and peace against a nuclear ICBM capable North Korea, and for deterrence against all ICBM threats to the United States.

“This is a proud day of our joint team and a historic day for our country. Our soldiers are trained and ready to defend the Nation with the exceptional tools the Missile Defense Agency has worked so diligently to produce and perfect. We are looking to the future with great pride and determination.” Col. Jeffery Horne, deputy commander for operations for U.S. Army Space and Missile Defense Command, remarked at the ceremony on July 22, 2004.

We at MDAA were present at the dedication of the Fort Greely Missile Defense Complex on July 3, 2004, and at Missile Field One at Fort Greely, Alaska on September 3, 2004 with the first GBI deployed in a silo, 27 days prior for the GMD system becoming operational. 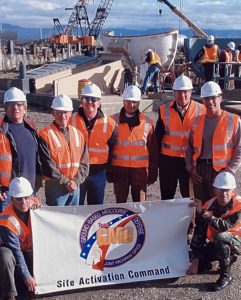 Riki Ellison and MDAA board members at Fort Greely for GMD activation, 2004.

Today, the nation has chosen to add twenty more GBI silos to Fort Greely for a total of 60 silos and 4 silos in Vandenberg AFB, California with 44 of those silos filled with GBIs. These 44 interceptors are made up of 3 generations of upgrades and modifications done over the past 16 years with the latest generation proving a dual salvo intercept. The Nation has made the decision to replace and add to these interceptors to best defend the United States with the Next-Generation Interceptor (NGI), which will take a decade to be developed, tested and deployed at the earliest for initial operational capability in 2030.

These 44 Interceptors of 3 generations that require multiple shots at single ICBMs with the first generation having to take many more shots than the third generation to have confidence and reliability for successful intercepts. Over the next decade the ICBM threat to the United States will substantially grow in capacity from current nuclear ICBM nations of North Korea and China as well as the clear possibility of rogue nations obtaining nuclear ICBMs such as Iran.

The requirement and demand for increased interceptors to defend America and its citizens is clear, resound and resolute over the next 10 years. It cannot be ignored or be accepted to live with taking the risk of not being best defended. Deterrence against War and Peace is the end and current state that we as a leading nation in the world must enhance and preserve with our ability to defend ourselves. The proliferation of the Ballistic Missile threat, the Cruise Missile threat and the Hypersonic threat to the United States has to be mitigated for peace, stability, world order and sustaining western democracies way of life. It is in the US constitution that a core government responsibility is to “provide for the common defense”, and protect the United States homeland, all 50 of its states and its territories.

The President of the United States, his administration, validated by the United States Congress in 2017, put forth a plan for 64 ground based interceptors. In compliance to that plan, twenty new silos at the cost of $417 million will be finished in September 2021, leaving twenty empty silos in the Missile Fields of Fort Greely, Alaska until the NGI is deployed in 2030.

Interim and Permanent solutions to best defend the United States are being calculated, authorized and appropriated by Congress, led by Combatant Commanders, the Department of Defense and the Administration of the President.

Solutions being discussed are:

– The Underlayer comprised of in production, in development and in operational deployed SM3 and THAAD interceptors.

We have reached 16 years of national security with U.S. Homeland Missile Defense that took less than 4 years to be deployed. We now require rapid acquisitions as fast as we have done in the past to continue peace and stability for the United States, it’s Allies and the World.

Wait we will not, as the risk is too great.