“We Cannot Escape Our Destiny”

May 8, 2019
Chart showing China's conventional weapons and missile-related customers from 2002 to 2017, from the DIA's 2019 China Military Power report.

“We cannot escape our destiny nor should we try to. The leadership of the free world was thrust upon us two centuries ago in that little hall of Philadelphia. In the days following World War II, when the economic strength and power of America was all that stood between the world and the dark ages, Pope Pius XII said, ‘The American people have a great genius for splendid and unselfish actions. Into the hands of America, God has placed the destinies of an afflicted mankind.’ … We are indeed, and we are today, the last best hope of man on earth.” – President Ronald Regan on January 25, 1974, nearly a year after the return of POWs John McCain, Bill Lawrence, and Ed Martin from Vietnam.

Leveraging the advantages of “no strings attached” polices, China is excerpting its One Belt, One Road Initiative, so all ‘roads’ lead to China across the globe and creates dependency and influence on those nations it invests in. Not only the continent of Africa, but nations that border international sea lanes from Asia to the Arctic have been acutely targeted with vast Chinese investments. Coupling these investments with data mining, internet weaponization, space control, technology theft, cyber-attack, 99 year leases, hypersonic missiles, artificial islands, Anti-Access/Area-Denial (A2/AD) strategies with the world’s most advanced weapons growing in both capabilities and capacity. China which has endured western humiliation over the last century is re-positioning itself to regain world dominance and bring back its Ming Dynasty legacy.

The Department of Defense, the National Security Council, and the State Department are very clear on naming China as a strategic competitor. America is great at competing, it is in our DNA, it is throughout our history. Competing against China in this great power competitive cauldron will produce some of the best technologies and systems ever seen by mankind, but can also move the competitor closer to western values, western norms in respect, and implementation for the best future of the marketplace and mankind in the globe and in space that we all share.

“With more than 5,000 years of civilized history, the Chinese nation created a brilliant Chinese civilization, made outstanding contributions to mankind and became a great nation of the world” – China’s President Xi Jinping

We must be vigilant, efficient, resourced, and risk oriented to fail fast in order to develop and deploy new technologies faster and new ways to compete and win. America has done this before after World War II as the single world power confronting a global competitor of the Soviet Union that challenged democracy with totalitarian rule. America won that competition.

Weaved throughout this history of strategic competition against the Soviet Union is a rich fabric of national and global leadership of the missile defense mission, lead and supported by Arizona and its legendary United States Senators. Senator Barry Goldwater, Chairman of the Senate Arms Service Committee from 1969 to 1987 – supported and oversaw the initiation of Nike and Hercules national missile defense system, deployment of the Grand Forks National Missile Defense, and supported President Ronald Regan’s Strategic Defense Initiative. Senator John McCain III, Chairman of the Senate Arms Service Committee from 1987 to 2018 ensured proper funding for the key missile defense systems that proliferate throughout our forces today, as well as the construction, modernization, and maintenance of our Aegis Fleet, which includes the USS John McCain III (DDG 56)named after him, his father and grandfather. Senator Jon Kyl, Senate Minority Whip from 1995 to 2013 was known as one of the Senate’s greatest advocates for missile defense and led the support for the ABM Treaty withdrawal in 2002.

In addition to the leadership and legacies of Arizona Senators, the State of Arizona has developed, engineered, and produced critical missile defense systems from the components of the Ground Based Interceptors and Aegis Standard Missile-3 (SM-3) interceptors to training for the F-35s at Luke Air Force Base. These Arizonian missile defense capabilities were fully demonstrated in the most complex missile defense test ever seen on March 25, 2019 in deployed operational configuration defending the United States of America against an ICBM.

Coming from an Arizona public school education that began in a one room school house in Rimrock, Arizona, through Camp Verde Middle School, Mingus Union in Cottonwood, to Amphitheater High School in Tucson, it brings great pleasure to highlight the State of Arizona. We took the time and honor this week to recognize the State of Arizona for its leadership on missile defense and the future of missile defense with the Honorable John Rood, Under Secretary of Defense for Policy, whom was educated at Alhambra High School in Phoenix, Arizona and at Arizona State University in Tempe, Arizona. 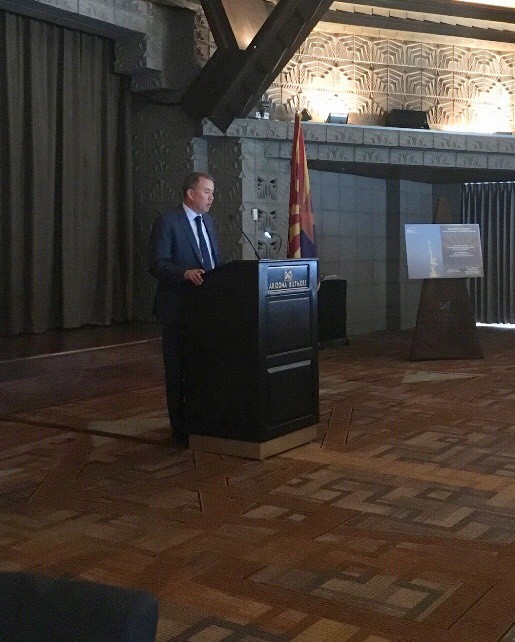 Honorable John Rood speaking at MDAA’s event to Recognize Arizona’s Contributions to Missile Defense on May 6, 2019.

United States missile defense advanced capability and increased capacity across the domains, joint with our military services and interoperable with our allies brings stability in this competition and helps to negate and deny our strategic competitor’s advantage and influence for global dominance upon the United States and our allies in the Pacific, in the Arctic, and in Space.

This afternoon, the United States House of Representatives brings forward and hears about these missile defense capabilities and their future in a public hearing at 2pm EST. It will be broadcast live by the House Armed Services Subcommittee on Strategic Forces: FY20 Priorities for Missile Defense and Missile Defeat Programs.