This past Friday afternoon, off the banks of the Severn River on the grounds of the United States Naval Academy in Annapolis, Maryland, the Chief of Naval Operations (CNO) for the U.S. Navy changed command from Admiral Jon Greenert to Admiral John Richardson. Joining and making remarks on this prestigious change of authority of the world’s most powerful navy was the Secretary of Defense, the Honorable Ash Carter and the Secretary of the Navy, the Honorable Ray Mabus.

The significance of this event was the stable transition of the head of the world’s only global navy that provides security and freedom of access of international waters for the global economic trade of goods. In addition to this critical role, the United States Navy provides mobility and strength in security and defense for the nation’s armed forces forward and its allies. In both capacities, the Chief of Naval Operations relies on integrated air and missile systems on his ships to prevent denial of access to international waters, defense of his global surface fleet, defense of the U.S. Homeland and defense of U.S. Armed Forces and Allies from ballistic and cruise missiles.

“In the months and years ahead the Americas navy will continue to be called upon. With global challenges that span every domain. Not only the sea, but also the air, land, space and cyber space. The navy is critical to our military ability to project power around the world. Protect the global commons and flow ready forces wherever they are needed. Given the advance systems being fielded by other nations today this will include helping ensure our forces and access denied areas. Our navy has long been a lynchpin of a long security and prosperity. Ensuring the free flow of commerce to allow many nations to rise and prosper. That won’t change causes our sailors, naval aviators, and submariners continue to sail, fly, and operate where any international law allows. From the Artic, to the South China Sea our military is first and foremost a war fighting force. While we seek to deter wars. We must also be prepared to fight and win them This means that overall strategic future must require focusing more on posture not only on presence, more on new capabilities not only ship numbers, and the navy is more enough for this task. Under Admiral Greenert’s leadership, the navy is already ready to research, developing and acquiring what we need to stay ahead of emerging threats. And to sustain our militaries technological superiority. This includes submarines, long range anti-ship missile, i.e. magnetic rail gun, numerous unmanned under sea, surface, and aerial vehicles, and a wide variety of payloads, from weapons to electronic warfare systems.”

As CNO, Admiral Jon Greenert has pushed for future technologies to both reduce the cost curve of engagement and to establish the foundation of electromagnetic “left of launch” technologies and force structure to better accomplish the Navy’s core missions in the future. His leadership efforts have put the meat on the bones of the “pivot to Asia” strategic re-balancing of U.S. Naval Forces to international waters where the status-quo is being challenged. Through excruciating times of reduced and sequestered budgets, Admiral Greenert has had to make tough decisions on investments into the Navy’s capability to fulfill its mission. Some of these decisions have had direct effects on the modernization of ships and taking ships off mission in order to reduce expenditures.

“John Greenert has infused leadership with new innovative initiatives. He understood where the future of technology lies spearhead new concepts for magnetic maneuver and cyber warfare. Expanded the use of unmanned systems across all the means. Deployed laser technology for the first time pushed the magnetic rail gun in testing, and we saw the future together with the first carrier landing and refueling of an unmanned aircraft. He understand as particular as we all do that secretary of defense of getting these new capabilities into the hands of our warfighters faster has got to be our priority.”

The single biggest challenge to the United States Navy and its Chief of Naval Operations is allocating resources required for the up and coming replacement to the Navy’s fleet of strategic nuclear submarines, a massive expenditure of billions of dollars that still lacks a line item in Congressional appropriations. The Navy must also balance this while maintaining and growing the rest of the of the fleet, all within an environment of downward trending budgets. This critical challenge for the Navy’s leadership, now the responsibility of Admiral John Richardson, has the potential to make or break the United States Navy as we see it today. Both Admiral Greenert and Richardson are immensely qualified by their experience as submariners and were the best choices by the Secretary of Defense and the President of the United States to manage this monumental change in seascape for the Navy and its mission.

“Continuing and building upon all this work will be critical in going forward and Admiral John Richardson was a clear choice to carry it out, like Admiral Greenert he is exceptional, strong, Hawaiian, centered, a bold and innovative thinker, tremendous leader, and go-to officer for many of the Navy’s tough issues in recent years. He has been its best troubleshooter. From handling problems of integrity and ethics, to preparing for the Ohio-class replacement ballistic missile submarine, to leading the navy’s advanced capability efforts. We need to get all that right in the years again. I know he will be the man to do it.”

We were honored to have CNO Jon Greenert attend and recognize our United States Missile Defenders of the Year over the years, and we thank him for his leadership and service to our nation under his critical watch.    .

” Unconditional trust, that is the foundation of us. Issues are transitory, the come and go, but principles will get us through.” 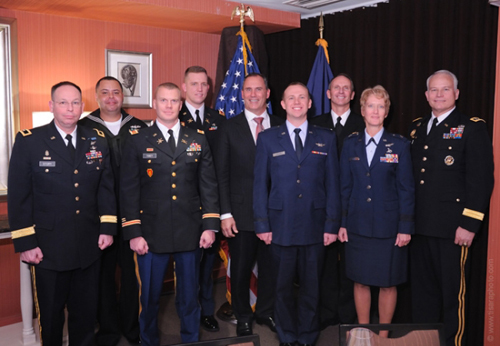