At a time of boisterous threats, an acknowledged North Korea nuclear warhead capability (The Washington Post’s article), and a direct threat of intent – “The KPA Strategic Force is now carefully examining the operational plan for making an enveloping fire at the areas around Guam…” – by North Korea to strike Guam, a U.S. territory, the Director of the Missile Defense Agency (MDA), Lieutenant General Sam Greaves, assured total confidence in our deployed missile defense capability to defend Guam, Hawaii and the United States of America against the North Korean ballistic missile threat today and in the near future (Link to Marine Corps Times Article). As the nation’s and the world’s top expert and commander on missile defense capabilities, their testing, their development and their evolution, LTG Greaves stated, “We will not over promise, especially in today’s threat environment.”

On July 10, 2017, the United States proved it could successfully intercept a North Korean Intermediate-Range Ballistic Missile (IRBM), when it intercepted a IRBM target missile with the Terminal High Altitude Area Defense (THAAD) system during a test (Link). The United States has an operational THAAD Battery deployed today in Guam, with launchers loaded with THAAD interceptors, that can fully protect the population of 175,000 from any and all North Korean IRBMs that could reach Guam today and in the near future. Further U.S. Aegis Ballistic Missile Defense (BMD) ships in the Pacific Fleet have ample capability to detect and defeat this same IRBM threat to Guam.

Rest assured that we have total confidence and enough capability and capacity to defend Guam today from North Korea.

“The nation should be very confident on our ability to defend against the threats today.” LTG Greaves, Director of MDA on August 9, 2017. 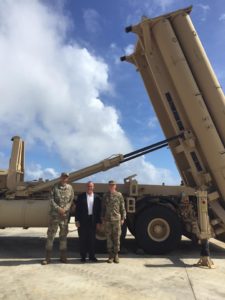 Riki Ellison with soldiers from Task Force Talon in front of a THAAD launcher operationally deployed in Guam on November 16, 2016.