To Be the Best on the Pen

On the peninsula and in the midst of the hyperbole of North Korea’s Intercontinental Ballistic Missile (ICBM) test to the world last Tuesday – relevant to the masses but irrelevant to those that operate the systems that easily defeat the 54 minutes of fame and its leader – we honored 42 warriors, game changers, and winners of missile defense on the Korean Peninsula that evening at the U.S. Army Garrison Yongsong in Seoul, South Korea. No stop, no attention, no panic, no relevance given to the “one shot” rocket man of North Korea who is desperately trying to change the game, in a no win situation, with a losing third world country. We honored the best of the best on the Peninsula, surrounded and in a thriving top 10 world economy and a bustling innovative and cutting-edge metropolis of nearly 10 million people that were not dictated, distracted, or effected by the actions of a desperate North Korean leader earlier that day.

Our winners, your winners of excellence in leadership, represented the best missile defense crews from the United States and the Repbulic of Korea, the U.S. Army 35th Air Defense Artillery (ADA) Brigade and the Republic of Korea Air Force 3rd Missile Defense Brigade. For the first time in history anywhere in the world, we brought the best United States deployed layered land-based missile defense systems together that have shut down and deterred North Korea’s missile striking capability on the Korean Peninsula. For the first time at our 6th annual Peninsula Missile Defender of the Year event, we recognized the crews of the THAAD Battery, the Patriot Batteries, the Avenger Batteries, and the Sentinel Radars with their best supply and maintenance crews and their command crews at the battery, at the battalion and brigade levels that are all deployed and operational today, defending the Korean Peninsula over the past year.

These very special selected soldiers competed to win and to be the best in a competitive cauldron competition of many disciplines, held earlier this year against all those serving in the Air Defense Artillery mission on the Korean Peninsula.

Watch a highlight video of the 35th ADA’s Missile Defender of the Year competition October 16-26, 2017.

The Republic of Korea and its Air Force have three Brigades of Air and Missile Defense, with the 1st Brigade for short range air and missile defense, the 2nd for Patriot missile defense outside of Seoul, and the 3rd for the Patriot missile defense for Seoul and its critical infrastructures. With the South Korean General Officer and Commander of the 3rd Brigade, Brigadier General Park Chan Sik, we recognized their best Patriot crews made up of Airmen that were chosen for their excellence of leadership.

The United States will never fight alone on the Korean Peninsula, they will always fight with their partner, the Republic of Korea in “we fight tonight.” The Republic of Korea’s (ROK) Army strength dwarf the United States Army presence on the Peninsula, as the U.S. has a little over a division size of 22,000 soldiers deployed. The ROK has 11 divisions off the Demilitarized Zone (DMZ), which are more divisions than the United States Army has today. This loyal partnership has endured the Korean War, where over 33,000 Americans were killed and over 137,000 Koreans were killed. With this atrocious memory of war, we brought our 2017 Peninsula Missile Defenders of the Year to the Korean War Museum earlier in the day to pay homage, honor, and embed the inspiration never to let this conflict happen again. We are fortunate and honored to have this air and missile defense mission supported, manned, and operated by both partner nations that contribute to not allowing a Korean War to happen again. This Peninsula one fight, one team, we fight tonight has to be exercised and led with partnership and integration across the fires domain to include all joint services. 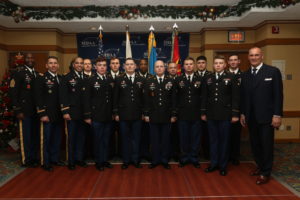 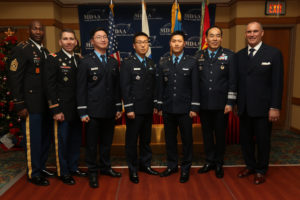 Our Peninsula Missile Defenders of the Year for 2017