The Other Eastern Front

The sudden emergence of an evolving Russian threat to NATO Europe driven by strategy to deny NATO air access and strike all of NATO is being developed and tested in Russian combat in Ukraine and Syria. With Russian air defense systems of the SA-20 and the SA-21 covering altitudes of 98,000 feet and creating an area denial of over 400 kilometers, strategically deployed in Kaliningrad, Crimea, and Syria infringes on NATO controlled airspace in Poland, Latvia, Estonia, Lithuania, Syria, and Iraq; thereby effectively restricting NATO ground forces and air forces in operations in those NATO and non-NATO countries where NATO troops are deployed. Due to persistent and overt Russian aggression to NATO boarding states, in 2016 NATO made the decision to deploy four battlegroups in Poland, Latvia, Estonia, and Lithuania – each coupled with a NATO country (U.S. -Poland, Lithuania- German, Estonia -UK, Latvia -Canada) – that are deployed today in operations. These four NATO battlegroup forces do not have, nor have been assigned by NATO a land-based layered air and missile defenses, that are both fixed and maneuverable, to defend their own force and capability from the current deployed evolving Russian military systems that are combat proven from Ukraine and Syria. NATO today has yet to put forward a full integrated live exercise that represents combining all of its offensive and defensive forces to defend, defeat, and attack in a contested area of denial.

Consequences of the NATO peace dividends from the 1989 Cold War victory and U.S. air supremacy in Europe enabled the U.S. to eliminate and NATO to drawn down significantly their short-range air defenses in Europe that were prolific during the Cold War. Russia seized upon this gap of vulnerability with NATO focused on Iraq and Afghanistan, to advance the Unmanned Aerial System (UAS) threat, the standoff range cruise missile threat, and the intermediate-range land-based ballistic missile – of which Russia has been accused of breaking the Intermediate-Range Nuclear Forces (INF) treaty – all coupled with a modernized “state of the art in the world” S-21 air defense system.

NATO at its height of military might had 100s of air and missile defense units deployed in Europe to defend against Russia and help to win the Cold War with the advent of the Strategic Defense Initiative (SDI) to defeat Russian intercontinental ballistic missiles (ICBMs) announced by President Reagan. Each of these air defense units (NIKE and HAWK) beginning in 1967 were required to be annually tested and fired at the NATO Missile Firing Installation (NAMFI) in Crete, Greece. Over 400,000 interceptors have been fired since 1968 out of NAMFI that include from systems on the ground, the sea, and in the air.

This past week at NAMFI in Crete, Greece, under the leadership of the United States Army Europe and the German Luftwaffe – hosted by the Greek Army – a live fire exercise of over 80 interceptors launched against short-range air and ballistic missile targets represented by drones and ballistic missiles. Proving out multi-national integration and interoperability that enabled a German Wing Commander, Surface Air and Missile Defense Wing 1 (SAM Wing 1), to command both a U.S. ADA Battalion (5/7 ADA) and a German ADA Battalion (SAM Wing 1) that each had Patriot Batteries and Short-Range Air Defense (SHORAD) capability attached (U.S. Avenger/Stinger) and (German LeFlaSys/Stinger) hand held and on vehicles to successfully engage multiple missile threats.

These ballistic missile and air breathing live firings exposed the ability to leverage different launchers and different radars from the two participating countries in the “fog of war” to provide the best firing solution. These firings also served as technical firings for NATO certification and evaluation that is required for the Germans and other participating NATO countries, but not for the United States. The end result provides confidence and brings battle experience for the many crews and multiple level of commands that launched the 80 interceptors.

The live multi-nation cross service live fire exercise in Crete enhanced trust, integration, and leadership with the two strongest capability and capacity air and missile defense nations of NATO – the United States and Germany – which will be at the forefront for the deterrence and defense in Europe on the eastern front against Russian aggression.

This technical live firing in Crete is not enough to quantify the requirement and the existing gap of a layered air and missile defense with U.S. Forces Europe, NATO Forces, and those four NATO battlegroups in the Baltic states and Poland. Bringing forward the U.S. and NATO Air Forces to provide air to air missile defense on cruise missiles in “live fly” with “live fire” of the land layered forces of Patriot and Stinger, that have also been provided early cuing from U.S. and NATO naval ships and connected by command and control of the Air Operations Center, on an annual basis is where NATO needs to be. To have true deterrence and true defense for the 700 million Europeans is to demonstrate and exercise annually the full multinational, joint cross domain capabilities that NATO has today.

NATO and the United States must be able to defend their forces in Europe from the complex layered air and missile threats that Russia has demonstrated and to have the means to penetrate the Russian anti-access and area denial over NATO territory.

In attendance at NAMFI, Crete for the live firing: 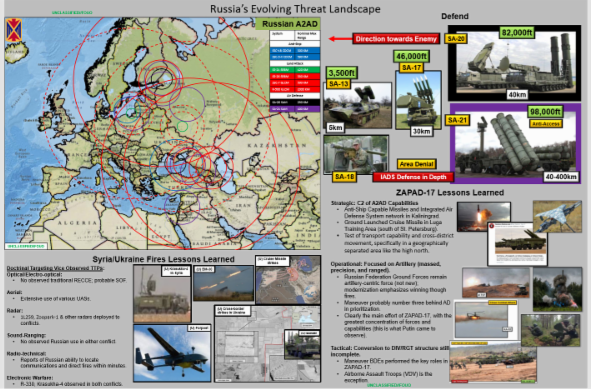