The Holy Grail of Missile Defense

On July 31st, 1979, Governor Ronald Reagan after visiting NORAD and its base in Cheyenne Mountain, Colorado for the first time, he noted:

“We have spent all that money and have all that equipment, and there is nothing we can do to prevent a nuclear missile from hitting us…We should have some way of defending ourselves against nuclear missiles.”

Earlier that year, the University of Southern California (USC) won the National Championship after defeating the University of Michigan in the Rose Bowl on Jan 1, 1979, I was a member of that great team (link) starting as a freshman linebacker for the season. Challenged with an engineering major, I met Dr. William Van Cleave, a professor at USC that headed the Defense and Strategic Studies graduate program and was persuaded to change my major, take a few of his recommended courses and apply for his graduate studies program. Dr. Van Cleave during this time from 1979 to 1981 was the Senior Advisor and Defense Policy Coordinator to Ronald Reagan and the Director of the Department of Defense transition team between the administrations of President Carter and President Reagan. He was also a former officer in the U.S. Marine Corps. More relevant, Dr. Van Cleave was a Special Assistant for Strategic Policy and Planning in the Office of the Secretary of Defense, member of the Team B effort to review national intelligence on the USSR and to produce a competitive National Intelligence Estimate. Dr. Van Cleave returned to resume his academic post at USC after his service to President Reagan. With many of Dr. Van Cleave’s graduates at USC placed and flourished in positions in Congressional Staff, DoD and State Department from the 1970s and 1980s; some are still involved today in missile defense and strategic policy including Dr. Robert Soofer who is appointed as the Deputy Assistant Secretary of Defense for Nuclear and Missile Defense Policy and the Assistant Secretary of Defense for Strategy, Plans, and Capabilities; David Trachtenberg, nominated for Principle Deputy Undersecretary of Defense, Policy; and Peppino DeBiaso, Director of the Office of Missile Defense Policy for the Department of Defense. Both Dr. Soofer and Mr. DeBiaso taught me at USC as graduate assistants for Dr. Van Cleave. 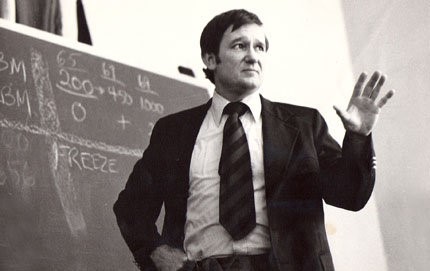 Dr. Bill Van Cleave introduced, taught and educated me and significant major policy makers inside and outside of class on missile defense and its vision to make the United States and the world a safer during my years at USC and in the decades following until he passed in 2013. During those formative years Dr. Bill Van Cleave enabled personal visits and discussions with Dr. Edward Teller (link) and Dr. Lowell Woods, who justified the science behind missile defense to President Reagan. 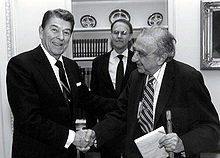 In 1983, one month prior to graduating from USC and Dr. Van Cleave’s program, President Ronald Reagan addressed the nation on March 23, 1983 on the Strategic Defense Initiative (link). This speech, inspiration and education positioned a lot of Dr. Van Cleave’s graduates including me to apply for policy positions inside President Reagan’s Administration and the Department of Defense upon graduation. However, the next month on April 26-27, 1983 (link), I was selected by Head Coach Bill Walsh and the San Francisco 49ers and was drafted into the NFL and could not directly pursue my passion for missile defense working in policy positions for the U.S. government. The following year, as a starting middle linebacker for the San Francisco 49ers, our team led by Joe Montana and Ronnie Lott went on an epic season to win the Super Bowl Championship (link). That year, the Super Bowl was held in Palo Alto, California with Apple being first introduced to the public and President Ronald Reagan providing the first coin toss from the White House as well as a call into our locker room after the game celebrating our victory (link).

With passion for missile defense fueled by President Ronald Reagan, Dr. Van Cleave provided me a position under Dr. Julian Davidson (link) in Huntsville, Alabama to work on the ERIS (Exoatmospheric Reentry Interceptor System; link) as a business developer under Bill Loomis the program manager for ERIS out of Lockheed Martin in Sunnyvale, California in my off seasons while playing for the San Francisco 49ers as those teams won two more Super Bowls in 1988 and 1989. The ERIS performed experimental intercepts of ICBM-like targets that had GPS beacons that were amplified further proving out the science after the Homing Overlay Experiment (HOE) that had one out of four successes (link). In 1986, the data and video of the HOE was shown to Russian Mikhail Gorbachev by President Reagan at the Reykjavik Summit in Iceland which contributed to the downfall of the USSR in 1989. During these years in the late 80s working on the ERIS, I met with President Ronald Reagan’s Dr. William Graham, the then Director of the White House Office of Science and Technology Policy and Science Advisor to President Reagan (1986-89), at the White House a few times. With visiting the White House as Super Bowl Champions after the 1988 Season, I had the opportunity to address missile defense directly to the President of the United States President George H. Bush Senior.

After retiring from the NFL and taking a sabbatical, I was brought to Washington D.C. To work on the lead systems integrator competition for the Ground Based Missile Defense (GMD) system as a business developer (link). This movement to have a national missile defense was led by Senator Stevens, Senator Inoyue that would move to Alaska our missile defense system from North Dakota to cover all 50 states and latter fueled by North Korea’s first ballistic missile launch over Japan in 1998 (link), the missile defense act of 1999 and the Rumsfeld Commission (link) of which Dr. Bill Van Cleave was on. In December of 2002, the United States formally withdrew from the 1972 ABM (Anti-Ballistic Missile) Treaty that prevented a full missile defense capability to defend the United States. In 2003, I founded the Missile Defense Advocacy Alliance (MDAA), a non-profit organization to support, advocate and educate the public on our nation’s movement to develop, deploy and evolve missile defense in making our nation and our world safer.

During these early years of testing the first generation GBIs (Ground-Based Interceptors), fitted with the CE-I kill vehicle, prior to the initial deployment in 2004, building a GMD and GBI site in Fort Greely, Alaska, I was asked to brief the President of the United States, George W. Bush, in the Roosevelt Room of the White House on North Korea and our nation’s ballistic missile defense. In 2004 we visited Fort Greely to see the first GBI in the first silo and on another visit dedicated the Fire Control Building that is in place today to Senator Ted Stevens with Senator Stevens.

On June 5, 2004, President Ronald Reagan passed away. Due to his significance and inspiration of missile defense later that year, I proposed to Mrs. Nancy Reagan a memorial and missile defense viewing site at Vandenberg Air Force Base overseeing the nation’s four GBIs and the testing silos for GMD. She accepted that proposal and we worked diligently with her team to get the memorial exactly to her expectations of the vision we provided her. With Mrs. Reagan, Senator Ted Stevens, Lt. Gen. Frank G. Klotz, and Lt. Gen. Henry A. “Trey” Obering III at Vandenberg AFB on April 10, 2006, we dedicated the Ronald Reagan memorial to be built (link). In 2008 we opened the memorial and it has been in place as a public viewing site for all the GBI tests the United States has conducted since 2008. 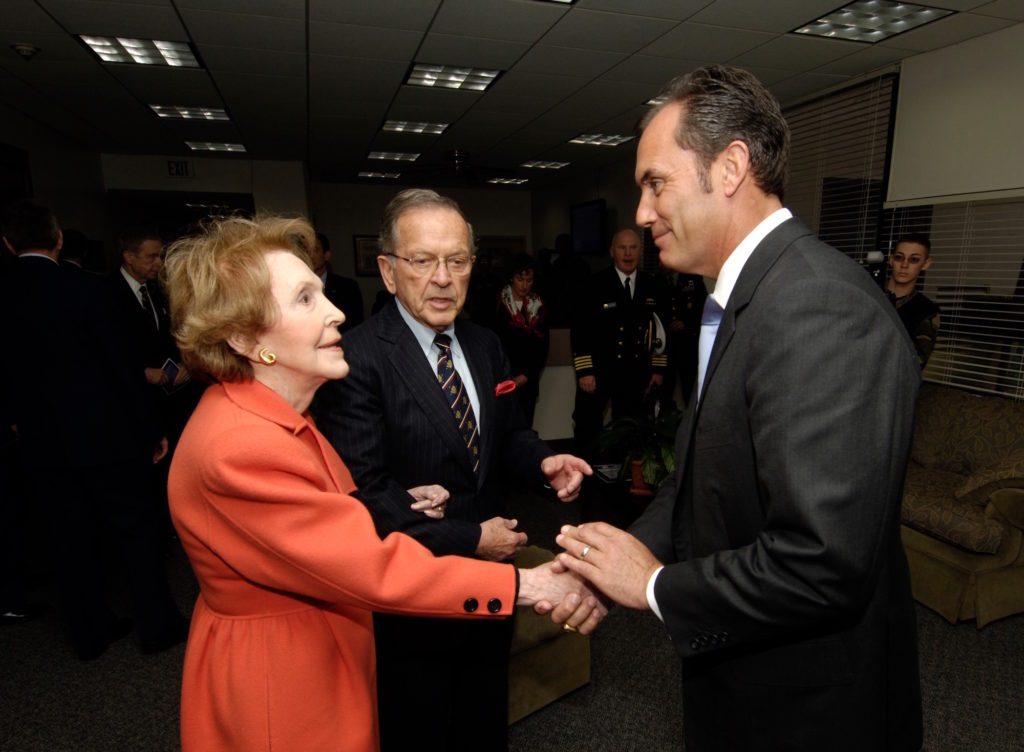 On May 30th, 2017, at the Ronald Reagan Memorial Missile Defense site in Vandenberg AFB, California, we watched and witnessed the first test of the new generation of GBI kill vehicle, the CE-II Block 1 and a new C2 Booster linked into the nation’s deployed operational missile defense capability on its historic first intercept of an ICBM (intercontinental ballistic missile) the world has ever seen. A completion of a remarkable quest and vision of President Reagan 38 years ago with resiliency of both failures and successes, close to $50 billion of investment during this time and America grit to finally achieve a proven successful operationally deployed capability to defend ourselves against a nuclear ICBM. Eight of these new CE-II Block 1 kill vehicles with new C2 boosters will be deployed and operational by the end of this year.

It is history. It is a tremendous achievement at the magnitude of landing on the moon for our engineers, our industrial base and the Missile Defense Agency.

As a missile defense advocate from the beginning of this quest, there was simply nothing more powerful and more satisfying than being at the Ronald Reagan Memorial Missile Defense site last Tuesday, May 30th to witness world history that so many thousands of people have created by their contributions of immense talent, leadership and sacrifice of their body of work in defeating and defending against human kind’s most dangerous weapon of destruction. 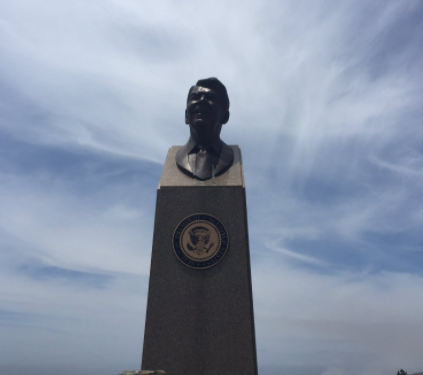 The Ronald Reagan Missile Defense Site at Vandenberg Air Force Base on May 30, 2017, the historic day that GMD successfully intercepted an ICBM-like target

This courageous spectacular act of 38 years in the making has made the nation and the world safer.

ICBM intercept capability is the Holy Grail of missile defense and now we are going to enhance it, make it more effective more affordable and expand both capability and capacity to make our nation and world a safer place.