The Eye in the Sky Never Lies

In the height of the Cold War and in unprecedented competition during the 1970s with the Russians for air superiority over Europe, the United States developed and deployed a mobile “Air Operations Center” in the skies. Built with a giant mushroom of a radar on top of the famous Boeing 707 aircraft built in 1955 and then later transformed into AWACS platforms from 1979 to 1981 by NATO, the Airborne Warning and Control System (AWACS) is one of the most distinguishable aircraft in the world. It’s air mobility role, at stand-off ranges to provide early warning for aircraft, put forward tracking information, and aircraft targets to its wingmen of fighters and bombers in the air and to the air warfare operational centers on the ground, force multiplied U.S. Air Force and NATO air superiority and dominance as well as filled gaps where terrestrial sensors are limited by the curvature of the earth. A persistent 360 degree overhead sensor for hundreds of miles that can be refueled in air with electronic warfare and constant links to the wings in the air and the AOC on the ground was an ingenious concept that contributed to the Air Dominance and Air Superiority of NATO.

The NATO AWACS mission is to develop, plan, and conduct airborne surveillance and battle management, in order to meet the Supreme Allied Commander Europe’s (SACEUR’s) military objectives, today and tomorrow. 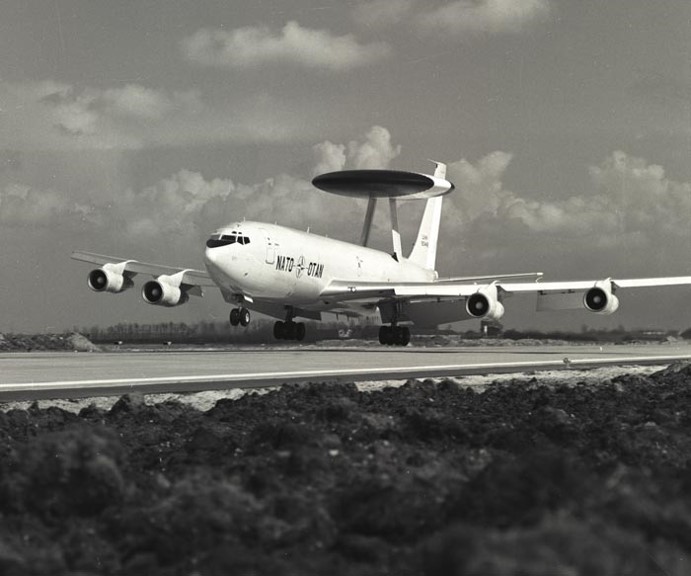 A NATO AWACS during the initial start of the program.

Due to the high strategic value as a sensor and as a command and control air platform, it is NATO’s solely owned weapon system and preferred force projection tool for strategic messaging, as it is not offensive and can stand off in friendly airspace, enabling it to fly near crisis areas. NATO also owns C-17 transport planes and will be deploying its first ever Global Hawk this year. NATO uniquely has its own separate force of 14 AWACS E-3As deployed at Geilenkirchen NATO Air Base (AB) under its command that is resourced, equipped, modernized, and manned by a collective 14 NATO nations of the willing. The United States is one of the 14 and has a 40% share of all the costs, followed by Germany at 25%, and the rest are much less in burden sharing that includes the share of personnel for operations of the AWAC and industrial manufacturing of the AWAC. Though each of the 14 countries get a vote on participating their crew members on the mission or not, they are disproportionately burden sharing.

There are four NATO nation’s with their own AWACS capabilities, with the United States deploying 32 of them around the world. The United Kingdom and France have AWACS on Boeing 707, different variants of the E-3. Turkey has four later versions in the Boeing 737, called E-7.  The UK also have four of these older E-7s, which are also operated by Australia. These new versions have the K 135 airframe.

In today’s post Intermediate-Range Nuclear Forces (INF) Treaty world, with the peer competitors of Russia and China, NATO cannot afford to deter and expect to win with yesterday’s weapons. The AWACS radar was developed in the 70s and is challenged today by tracking low, slow, or hypersonic cruise missiles and Unmanned Arial Vehicles (UAVs) with small cross sections. The AWACS radars need to be modernized or replaced, as does continually upgrading the electronics. The future AWACS will need to be able to integrate and be interoperable with future sensor platforms on UAVs, fifth generational aircraft, space sensor constellations, and with the Navy AWAC version (E-2 Hawkeye) that has a three phased array radar to track and target cruise missiles that would threaten the fleet.

We commend NATO for owning and operating the important and critical air capability and encourage them to enable the AWAC system to be more effective and efficient in today and tomorrows deterrence for the stability of Europe.